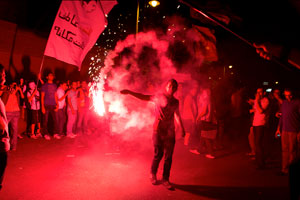 Egypt’s stormy path towards a democratic transition has topped world news since the 2011 revolution ousted President Hosni Mubarak and continues to the present day following mass protests in July 2013 that led to the army’s removal of President Mohamed Morsi.

Below are books, articles, and websites recommended by International Peace Institute staff that give insight into the historical, political, and socioeconomic underpinnings of the unrest in Egypt, and perspectives on where the country is headed.

The Roots of the Unrest

Liberation Square: Inside the Egyptian Revolution and the Rebirth of a Nation by Ashraf Khalil (St. Martin’s Press, 2012)
Published in January 2012, Liberation Square describes what brought Egyptians to the boiling point—the milestones on the path to President Hosni Mubarak’s renunciation of power, including those which many considered inconsequential at the time. Khalil not only explains the causes that led to the Egyptian uprising in January 2011 but also how a people that were often portrayed as the model of subservience, under a regime that was thought to have mastered the art and balance of dictatorial rule, woke up from the stupor. Suggested by Jose Vericat, Adviser.

Marginality and Exclusion in Egypt by Ray Bush and Habib Ayeb (Zed Books, 2012)
This collection of essays examines the dynamics of political and economic marginalization. It explains the inequality and disenfranchisement that led to Egypt’s revolution, arguing that marginalization should not necessarily be equated with powerlessness and that the marginalized can have agency. Suggested by Nur Laiq, Senior Policy Analyst.

The Struggle for Egypt: From Nasser to Tahrir Square by Steven Cook (Oxford University Press, 2011)
This analytical history of modern Egypt, beginning with Nasser’s years, offers invaluable insights into how Egypt arrived at its present predicament. This is very useful background reading for understanding the current events. Suggested by Francesco Mancini, Senior Director of Research.

Egypt on the Brink: From Nasser to Mubarak by Tarek Osman (Yale University Press, 2011)
Osman offers an easily accessible history of Egypt over the last sixty years from Nasser to Mubarak. The book is particularly interesting for its focus on the economic sphere and the impact of Sadat’s free-market and Mubarak’s neoliberal policy agendas. It also devotes sections to the role of political Islam and Arab nationalism in the national consciousness. Suggested by Nur Laiq, Senior Policy Analyst.

On the State of Egypt: What Made the Revolution Inevitable by Alaa Al Aswany (Vintage, 2011)
From the acclaimed Egyptian novelist and author of the classic The Yacoubian Building, this short and lucid volume is a collection of essays written prior to the revolution that addresses all the issues that were, and still are, at the source of Egyptian unrest. Authoritarian rule, poverty, police brutality, injustice, women’s harassment—to name a few—are treated in a very candid and open way, providing a fascinating sociological portrait of contemporary Egyptian society. Each essay ends with the sentence “democracy is the solution.” Two years after the publication of the book, it remains a compelling read. Suggested by Francesco Mancini, Senior Director of Research.

Revolution 2.0: The Power of the People Is Greater Than the People in Power by Wael Ghonim (Houghton Mifflin Harcourt, 2012)
This the memoir of the previously unknown Google executive from Egypt who in the summer of 2010 anonymously launched a Facebook page to protest the death of one Egyptian man at the hands of the security forces. The page’s explosive following is considered one of the starting points of the protest via social media. A useful book to understand the role of virtual networks in expanding and sustaining the Egyptian revolution and their role in reverberating the unrest across the region. Suggested by Francesco Mancini, Senior Director of Research.

“Call it What You Wish, Egyptians are Shaping Their Destiny,” by Tamer Nagy Mahmoud for The Atlantic Council
This article provides a comprehensive analysis of events leading up to Morsi’s ouster, the long-term causes of his unpopularity and the motivations of the relevant factions involved the uprising, particularly the controversial role of the military. Most importantly, however, it shows why the question of “coup” or “revolution” is largely irrelevant in the greater scheme of things. Suggested by Omar El Okdah, Research Assistant.

“On Sheep and Infidels,” by Sarah Carr for Mada Masr
Carr’s analysis of developments in Egypt since the deposition of Morsi has become essential reading. She presents herself as a contrarian, trying to pierce through the chauvinism that has overtaken Egyptian street, which is more polarized than ever. A writer for Egypt Independent until its dissolution, Sarah Carr continues to offer unique nonchalant style on a variety of websites. This particular piece is an attempt to challenge the ugly, high-voltage pro- and anti-Morsi propaganda. Suggested by Jose Vericat, Adviser.

“Mubarakism Without Mubarak: The Struggle for Egypt,” by Joseph Massad for CounterPunch
Massad’s analysis of the situation in Egypt from a class struggle perspective is original and throws light on some of the forces at play, despite the fact that its reduction of the actors to such neat categories is oversimplistic. Suggested by Jose Vericat, Adviser.

“Premature Obituaries for Political Islam,” by Fawaz A. Gerges for Foreign Policy
Gerges’ piece on the implications of recent events in Egypt for the Muslim Brotherhood is a coolheaded analysis of the real impact they will have on the organization and the region, as they dangerously pit secular and religious forces against each other in an unprecedented manner. Suggested by Jose Vericat, Adviser.

“The June Rebellion in Egypt,” by Mohammed Bamyeh for Jadaliyya
Describing the July 3rd overthrow as a “rebellion,” the author digs deep into the political anatomy of Egypt’s budding democracy, from the problems associated with “street dynamism” to the fluid and multifaceted forms of “legitimacy” that can exist in transitioning countries. Suggested by Omar El Okdah, Research Assistant.

“Wild Rumours of Hamas Interference in Egypt Find Audience,” by Dina Azzat for Ahram Online
This article, written more than six weeks before the ouster of the Muslim Brotherhood government, is important in that it provides an excellent insight into one of the major internal dynamics in Egypt that led to those events: first, the mobilization of the media against Morsi’s rule and, second, the specific use made of the Palestinians—Hamas in particular—in inciting Egyptians. Suggested by Jose Vericat, Adviser.

Mada Masr, www.madamasr.com
This is a relatively new kid on the block in the blog world. It offers news from Egypt on politics and the economy and includes analysis pieces as well as links to reports and documents on the latest developments. Suggested by Nur Laiq, Senior Policy Analyst.

The Arabist, www.arabist.net
This website on Arab politics and culture is an excellent reference point for all things related to Egypt. It offers exclusive analysis as well as links to a wide range of articles that offer myriad perspectives on recent developments. Suggested by Jose Vericat, Adviser.

About the photo: Fireworks at a march on the presidential palace in Cairo, July 2012, that called on then-President Morsi to release military prisoners. (Bora S. Kamel/Flickr)