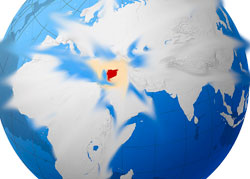 The conflict in Syria is becoming “the biggest proxy battle of the last several generations in the Middle East, and in the entire world,” according to Rami Khouri, Director of the Issam Fares Institute for Public Policy and International Affairs at the American University of Beirut in Lebanon. “Everybody in the region and two of the global powers—the Russians and the Americans—everybody is fighting each other inside Syria through proxy parties,” Khouri said in an interview with the Global Observatory.

For the Lebanese, this is having direct effects at home. Hezbollah played a pivotal role in the recent fall of the Syrian city of Qusayr to Assad’s forces, according to Khouri, and tensions are increasing within Lebanon between Hezbollah supporters and detractors, who are largely for or against the Syrian government, respectively. The Syrian conflict and existing tensions in Lebanon have now “meshed into a single dynamic,” Khouri explained. As such, fighting within Lebanon is also becoming more intense.

Assad’s victory in Qusayr was considered a turning point in the conflict in favor of the Syrian government by many, though Khouri explains that it also demonstrated the weakness of the Syrian government’s own forces, who likely would have struggled to take the strategically located city without the now-vigorous support of Hezbollah and Iran.

“So the Lebanese war has spilled into Syria as much as the Syrian conflict is spilling over into Lebanon,” said Khouri. And with the strengthened axis between Hezbollah, Syria, and Iran, the repercussions are being felt across the region. Some Sunni religious and political leaders further afield are ratcheting up the rhetoric of a broader Sunni-Shia conflagration. “This could be the beginning of a much wider Sunni-Shia confrontation,” said Khouri. “This will be a catastrophe if it happens, because it could engulf the whole region.”

Khouri said that the proposed Geneva peace talks could convene if the patrons of both sides—the Russians, Americans, Saudis, Qataris, and others—really made a push. As the intentions of these patrons remain unclear, “It’s hard to see [the talks] actually succeeding,” Khouri said, “but you never know.”

Below is the full interview between Marie O’Reilly, Associate Editor at the International Peace Institute, and Rami Khouri, who was reached by phone in Lebanon.

Marie O’Reilly: I am here today with Rami Khouri, Director of the Issam Fares Institute for Public Policy and International Affairs at the American University of Beirut and a syndicated columnist based at The Daily Star newspaper in Lebanon. Rami, thank you for speaking with the Global Observatory today.

In the past two weeks, Hezbollah’s now open support to the Assad regime in Syria has greatly strengthened the Syrian government’s position in the conflict. But you have also said the amount of support the government seems to need—particularly from Hezbollah and Iran—also shows the government’s own weakness. What impact is Hezbollah’s involvement in Syria having on the direction of the war there?

Rami Khouri: Well, what I think is clear is that the Syrian armed forces really needed Hezbollah’s direct assistance to win the battle of Qusayr. And if that’s the case, then the Syrian Armed Forces are probably in a rather vulnerable and weak position in some respects. Qusayr is not a very big place, and the Syrian Armed Forces are huge—they are several hundred thousand [men] and have much greater firepower and capabilities than the opposition in Syria. So, if they needed Hezbollah’s aid just to win Qusayr—and it took them about two-and-a-half weeks—that’s not a very good sign of the Syrian government’s capabilities.

Psychologically and politically, it probably also helps the Syrian government and armed forces to know that Hezbollah is prepared not just to assist politically but to fight militarily—that probably raises morale among the Syrians who are with the government.

We don’t know if Hezbollah is going to continue militarily assisting the government in other places, but I think it’s clear that Hezbollah’s aid to the Syrian government militarily, for the moment, is quite important.

MOR: And what does Hezbollah’s support to the government mean for the Syrian opposition?

RK: It means that the Syrian opposition has to think deeply, quickly, and strategically about what it is doing, how it is doing it, and what it intends to achieve. The opposition is politically divided, diplomatically weak, split on the ground among many different groups, and militarily underfunded, underequipped, and undertrained. It probably can overthrow the regime if it resolves those issues. It could remove the regime either diplomatically or militarily, or through a combination of both—which is likely to be the combination that will work in the end. But that’s a lot to ask for an opposition that has been very divided and has had limited impact over the last two-and-a-half years.

If it remains in the situation that it’s in now, the likelihood is that Assad could stay in power for quite a while, ruling over about half the country and seeing the country deeply divided, militarily pulverized in many places, economically shattered, and politically isolated from the rest of the world. So, it’s an ugly scenario if things just stay like this, but that is one of the scenarios that we have to keep in mind.

MOR: Moving on to Lebanon now: what are the repercussions of Hezbollah’s increased involvement in Syria for peace and stability in Lebanon?

RK: Lebanon is a country with serious internal cleavages and massive penetration of external forces and political ideologies. We had one major civil war in the country from 1975 until about 1990, so there has always been a level of internal tension, violence, and ideological polarization.

This has been exacerbated now by the impact of the Syrian conflict and the fighting inside Syria. You’ve essentially had two things happen: the fighting inside Lebanon has become a bit more intense, as some groups have been fighting each other more frequently and more viciously than before—Lebanese groups who are pro-Syria or anti-Syria, pro-Hezbollah or anti-Hezbollah. The other thing that’s happened is that the Syrian conflict and the internal Lebanese tensions have kind of meshed into a single dynamic. So you have, in some cases, Hezbollah fighters inside Syria and anti–Syrian government and anti-Hezbollah fighters who are Lebanese also inside Syria fighting each other.

So the Lebanese war has spilled into Syria as much as the Syrian conflict is spilling over into Lebanon. This has created huge new lines of tension in Lebanon. The concern of many Lebanese is that Lebanon will continue to be a proxy battlefield for the conflict inside Syria, while Syria itself becomes the biggest proxy battle of the last several generations in the Middle East and the entire world. Because everybody in the region and two of the global powers—the Russians and the Americans—everybody is fighting each other inside Syria through proxy parties.

MOR: And do you think that this is a gamble for Hezbollah in a way? If they ultimately come out of Syria victorious, will that strengthen their legitimacy in Lebanon and vice versa?

RK: Well their legitimacy is already established based on what they’ve done in the last 25 years or so. Their legitimacy is based on their ability to serve their core communities in Lebanon, mainly the Shiites but also others, and their prowess in doing things like repelling the Israeli occupation of South Lebanon. They’re not going to be toppled as a political power in Lebanon, but they’ll certainly find themselves in a much more confrontational, adversarial situation, with a lot of Lebanese and a lot of other people all around the region who are strongly opposed to what Hezbollah is doing—not only fighting in Syria, but maintaining a powerful military force inside Lebanon that is beyond the control of the Lebanese government.

So, there is much stronger criticism of Hezbollah among many people now. And the next step has been that many leading Sunni religious and political leaders around the region, especially in the Gulf, have openly called on Sunnis from all around the region to go fight Hezbollah, Syria, and Iran. Hezbollah, Syria, and Iran are seen as one unit, and many people are now openly saying that this is a dangerous group of Shiites in the region who are under the control of Iran, and they must be stopped. So this could be the beginning of a much wider Sunni-Shia confrontation. This will be a catastrophe if it happens, because it could engulf the whole region.

MOR: There is a lot of discussion in the UN and diplomatic community here in New York about the Geneva peace talks proposed for July. But Syrian opposition groups now say they will not participate in talks unless they are sent more arms in advance. What are the prospects for these talks in your view? Are they a first step on a very long road to peace, or should the international community concentrate its efforts elsewhere?

RK: My impression is that the chances of success in Geneva are very, very small, but they’re not zero. It might turn out that, for various reasons, either the government in Syria or the opposition groups might find that a pause in the fighting and trying to explore other options might serve both sides’ interests. It’s also possible that the patrons of both sides—the Russians, Americans, Saudis, Qataris, and others—might bring pressure to bear on their allies inside Syria to at least explore a mechanism to bring about the goals that both sides seek.

The problem is that the goals of the Assad regime and the goals of the opposition are so diametrically opposed that it’s impossible to reconcile them under any kind of rational thought process or political equation. The opposition wants to get into negotiations to remove the whole Assad regime and Baathist party system, not just Assad himself. And the Assad government wants to get into talks to stop the opposition’s rebellion and maintain its control in perpetuity. They talk of reform, but that’s been going on for years and has never been seen to be very serious.

But nobody wants to be the person who says, “we refuse to go and explore the chances for peaceful, negotiated transition.” Everybody is going to try to avoid taking the blame for not having the peace conference convene in the first place.

We’ll just have to wait and see. The diplomatic weight and intent of the patrons of the parties are pretty much unknown to the rest of the world, so we’ll have to see if they decide to really make a push. If they do, then the conference will convene. It’s hard to see it actually succeeding, but you never know.

MOR: Thank you for sharing your insights with us today, Rami.

RK: My pleasure, thanks for having me.