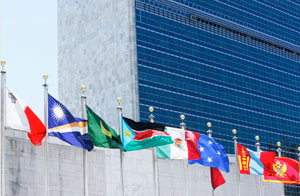 In an address to the UN’s Forum of Small States last year, Secretary-General Ban Ki-moon asserted what the majority of UN members have long recognized: “Being small does not mean an absence of big ideas.” Indeed, small states—which are more than half of the UN’s members—routinely drive substantive and structural issues at the UN, as they strive to uphold and develop international principles.

Most recently, twenty-one member states renewed the call for Security Council reform last month with the launch of the cross-regional ACT (Accountability, Coherence, and Transparency) group in early May. Led by Ambassador Paul Seger of Switzerland, ACT takes on Council improvements from a pragmatic stance, calling not for the enlargement of the Council, but instead for better working methods that are transparent, inclusive, coherent, legitimate, and accountable.

Since the UN’s founding in 1945, when many of the world’s small states did not yet exist, its membership has nearly quadrupled. Today, small states comprise the majority of the UN; out of 193 member states, 105 are small states (as classified by their membership in FOSS and its population criterion). As their numerical strength demonstrates, small states are increasingly important players in international diplomacy.

Multilateralism and international platforms like the UN provide small states the opportunity to play a role in global affairs that is disproportionate to their size. Small states are often excellent international players, as they can work swiftly and much more flexibly than their larger counterparts saddled with extensive domestic bureaucracies and constraining chains of command. They also prioritize issues strategically, as their UN mission teams and foreign ministries are not large enough to cover the entire range of issues on the UN agenda. This practical prioritization often leads to success on the big ideas small states bring on key issues.

The Arms Trade Treaty, adopted by the General Assembly in April 2013, grew out of a concept and early documents introduced and coordinated by Costa Rica, a state that drove the treaty process throughout well over a decade of intense lobbying. The International Criminal Court developed from Trinidad and Tobago’s call, before the General Assembly in 1989, for a reconsideration of long-abandoned proposals for an international court. The UN Convention on the Law of the Sea, which came into force in 1994 and is currently ratified by 165 states, was significantly shaped by three small but significant maritime states—Malta, Singapore, and New Zealand.

Small states, often with limited political alliances and interests, can bring moral authority to issues that are controversial and politically charged. One example is climate change, which has the gravest immediate impact for small island states. In 2009, the Pacific Small Island Developing States (P-SIDS) drafted a resolution ensuring the security implications of climate change are taken into account. Their resolution passed the General Assembly by consensus and enjoyed co-sponsorship from more than one hundred states.

The ACT group is not the first time small states have come together to work toward an improved Security Council. The Small-5, made up of Costa Rica, Jordan, Liechtenstein, Singapore, and Switzerland, worked from 2005 to 2012 and proposed a draft resolution recommending institutional improvements for the Council. The draft was withdrawn in 2012 following intense political pressure from big governments, particularly those with permanent seats on the Council.

The impact of Security Council reform for small states is clear. From 1991 to 2010, forty-two states elected to the Council had ten million or less inhabitants. But many others have never been elected, either despite repeated candidacies or because they have accepted as inevitable their exclusion from a seat. The Council has been described as the “high table” of international relations, and in the words of one diplomat, “if you’re not at the table, you’ll be on the menu.” Haiti’s nearly decade-long place on the Security Council agenda illustrates this point. The UN Stabilization Mission in Haiti (UNSTAMIH) was mandated by the Council in 2004, and remains in operation. But in the last ten years, not one Caribbean state has sat on the Council to offer a regionally-informed view of the situation.

ACT accepts the reality of the underrepresentation of small states—and, in fact, of all states who are not the Permanent Five. ACT begins with the mission of improving the working methods of the Security Council to increase the involvement of states who are not members of the Council. ACT already has members and allies that are medium- and large-size states, but it demonstrates that, in the words of Kofi Annan, the contributions of small states are “the very glue of progressive international cooperation for the common good.”

Andrea Ó Súilleabháin is a Visiting Fellow at the International Peace Institute. She conducts research on Small States at the UN for a joint project of IPI and the Permanent Mission of New Zealand.