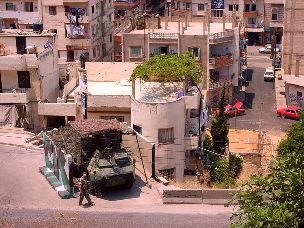 The battle on June 6 between rebel groups and the Syrian army over Kuneitra, the border town on the northern Golan Heights that straddles the Israeli-Syrian disengagement line, is yet another indication that the Syrian civil war is slowly but surely drawing Syria’s neighbors into its orbit. While the Syrian-Lebanese border zones are where this has been particularly manifested through cross-border skirmishes, transfers of arms, crossing of combatants, and flights of refugees, the battle over Kuneitra and previous cross-border incidents indicate that Israel is increasingly drawn into the war as well. Not coincidently, it is at the Syria-Lebanon-Israel tri-border region where this cross-border leakage is becoming most volatile.

Since the Israeli withdrawal from South Lebanon in 2000, the Syria-Lebanon-Israel tri-border region has been extremely explosive. The UN, which in 2000 demarcated the Israeli line of withdrawal from South Lebanon, has attempted to defuse tension there related to Lebanon’s territorial claim over the Shebaa Farms and the village of Ghajar and Hezbollah’s military operations in this area as part of its “resistance” strategy against Israel. These border disputes are now overshadowed by the daily battles, human catastrophes, and the political predicaments of the civil war.

While UNIFIL continues to coordinate regular meetings with senior officers from the Lebanese Armed Forces (LAF) and the Israel Defense Forces (IDF), to facilitate cooperation between the two parties, these meetings have become no more than an obligatory ritual. As the stakes grow higher that the war in Syria may involve not only Syrian and Lebanese political factions and militias, but also Israel, UNIFIL’s capacity to mitigate tension and facilitate communication between the rivaling parties has been dramatically reduced.

A clear indication of the weakness of UN peacekeeping missions in the region and their inability to function effectively has just been seen in the Kuneitra battle. Austria decided to pull out its 380 soldiers who serve in the United Nations Disengagement Observer Force (UNDOF) in the Golan Heights. This will undoubtedly debilitate UNDOF, as its total personnel are 900 soldiers. In fact, the Syrian-Israeli Disengagement Agreement, which has lasted effectively since the 1973 war, is disintegrating in front of us.

The tri-border region has always been a center of cross-border activities, particularly in times of conflict, because of its rugged topography and strategic location. From the late 1960s to 1982, for example, the ‘Arqub region–then nicknamed “Fatahland”–was a crucial territorial bridge for Palestinian guerillas to transfer arms and combatants from Syria to Lebanon, and to launch guerilla attacks against Israel. Now, the region has assumed this role again, only this time in the opposite direction. The village of Shebaa has sheltered thousands of Syrian refugees and functioned as a territorial bridge to transfer arms and combatants to opposition groups operating in southern Syria. The close proximity to Israeli-controlled Golan Heights makes this cross-border activity particularly dangerous, and Israel has already noted that any spillage to its territory would be answered in full force.

As Hezbollah has become fully engaged in combat in defense of the Assad regime, it has been important for the organization to depict its involvement in Syria as part of its resistance strategy against Israel and the United States. From 2000 until the eruption of the civil war, this resistance strategy was primarily focused on the struggle to “liberate” the Shebaa Farms. Now, the territorial frontline of the resistance has expanded. After Israeli warplanes bombed in early May locations in Damascus presumed to hold missiles destined to Hezbollah, the opportunity arose to frame the organization’s involvement in Syria as a struggle against Israel and the United States. On May 24, the Kuwaiti newspaper al-Rai quoted a Hezbollah senior official stating that “now that the Golan front has been linked to the Shebaa Farms, Al-Ghajar, and Al-Sheikh [Hermon] Mountain, the war with Israel will definitely take place sooner or later.” A day later, on the occasion of the thirteenth anniversary of “Liberation Day,” the Lebanese national holiday commemorating Israel’s withdrawal from South Lebanon, Hassan Nasrallah, Hezbollah’s secretary-general, further elaborated on this point. If Syria falls, he argued, the resistance will be under siege and Israel, then, will invade Lebanon. If Syria falls, he continued, Palestine is lost. For this reason, he concluded, Hezbollah is defending Lebanon, Palestine, and Syria.

In 2000, when Israel withdrew from Lebanon, Hezbollah used the Shebaa Farms imbroglio as an excuse to continue its armed struggle against Israel. Consequently, for over a decade the UN was engaged in attempts (led by UN diplomat and current president of the International Peace Institute Terje Rød-Larsen) to find solutions to this border dispute so as to remove Hezbollah’s pretext to remain the only armed militia in Lebanon. While the Shebaa Farms and the village of Ghajar are still rhetorically high on the resistance agenda of the organization, Hezbollah no longer needs this excuse not only to keep its arms but to actively engage in warfare in the name of the resistance.

It may be in Hezbollah’s interest to draw Israel into the Syrian civil war, for it would conclude the framing of this war as a war of resistance against the “usurping entity.” The spark that could draw Israel in may be cross-border spillage of the civil war into Israeli-controlled territories, or another Israeli air raid against arms shipments to Hezbollah or to the Assad regime. It is in Israel’s upmost interest to remain out of this war, as that is in the interest of those who seek to reduce the level of devastation and human suffering. Unfortunately, the international community is polarized and consequently paralyzed in its ability to stop the war, and the prospects of greater Israeli involvement are increasing by the day.

Asher Kaufman is Associate Professor at University of Notre Dame’s Kroc Institute for International Peace Studies. His book, “Contested Frontiers in the Syria-Lebanon-Israel Region: Cartography, Sovereignty, and Conflict,” is forthcoming from The Woodrow Wilson Press in association with the Johns Hopkins University Press in August 2013.

About the photo: Lebanese army vehicle and soldier on Syria Street, 2011. (wikipedia)