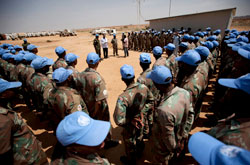 As UN peacekeeping–already at historic levels–grows further to undertake a new mission in Mali, an expanded mission in the DRC, and potential future missions in Syria, Somalia, and Afghanistan, it is worth looking at who has and who will provide the troops, observers, and police that make up such missions. Which countries consistently provide the most personnel?  Should the UN concentrate on finding troops from new contributors, or bringing old ones back into the fold? And, more importantly, are all UN member states contributing their fair share to UN peace and security efforts, as obligated in Article 43 of the UN Charter?

Over the past year, IPI has worked to compile a new database on UN peacekeeping operations, the IPI Peacekeeping Database. The database shows what countries have contributed to which missions on a monthly basis since November, 1990. The data is further disaggregated by type of contribution (troops, police, and military observers/experts) and by gender when those records are available, and will be updated monthly. This database is now publicly available for download as part of the Providing for Peacekeeping Project (PPP), an ongoing research initiative hosted by IPI and managed in partnership with George Washington University’s Elliott School of International Affairs and Griffith University.

One aim of this research is to generate timely analysis to support efforts to “broaden the base” of troop- and police-contributing countries. In fulfilling that goal, a reasonable starting point would be to first find ways to measure the historical breadth of the base. At the most basic level, it’s true that many more countries are participating in UN peacekeeping missions today than in previous decades. For instance, in 2012, 115 countries contributed to peacekeeping missions, compared to a peak of 73 in 1993. In a fairly short period of time, from 2002 to 2008, the number of African countries contributing to peacekeeping doubled, surpassing the number of European contributors. Asia experienced similar growth in new contributors, although this increase took a much longer time (from 1998 to 2011, approximately).

However, broadening the base surely means more than just increasing the number of contributing countries. Analysis of the changing size of each country’s contribution over the last five years can show whether the burden of personnel contributions is being shared more equally or less equally.

Although the median level of uniformed contributions did not change significantly since the end of the Cold War (hovering around 100 personnel per country per month), we can use measures of distribution to get a better sense of the base. Pulling a concept from economics, we can use the Gini coefficient to show the relative spread of troop contributions over time. A value of 1 would represent a situation in which all troops were provided by a single TCC, and a value of 0 would mean that every TCC contributed the same number of troops. Using this measure, a shift toward a more “narrow” contribution base has been apparent since 1993—from 0.42 to a peak of 0.79 in 2006. However, since 2006, a reverse trend is evident, with contributions becoming slightly more evenly distributed. Yet, this rate of change toward more equal distribution has been incremental and limited, moving only from 0.79 to 0.74 over six years.

Another way to parse the data is to split contributors into a number of groups (in this case, five) of equal size based on their rank of contribution. The total contribution for each group is then calculated as a percent of the overall total to highlight each group’s relative share. Looking at these trends over time paints an interesting picture. As with the Gini measure, beginning in 2006, there has been a slight reverse in the distribution trends of the contributors. And like the Gini data, this seems to be a very slight initial reversal followed by a relative plateau. However, the quantiles show that this trend is even more limited than one would take away from glancing at the Gini distribution, as it really represents a light convergence of the top 2/5th of contributors with no change in the bottom 3/5th. All of this tends to back up what Alex Bellamy and Paul Williams called “tokenism” in their recent paper on the subject of broadening the base.

There is a second noticeable trend in the data. Between 1996 and 1998, there was a convergence of the top 2/5th of contributors (and to a lesser extent, the middle 1/5th). This coincides with a relative lull in overall peacekeeping deployments. Prior to this period, Asian peacekeepers (most prominently South Asian) and European peacekeepers were deployed in comparable levels, though European personnel was definitely more numerous. After this convergence, European peacekeepers never returned to pre-1996 levels, while the number of peacekeepers from Asia and Africa ballooned. This indicates the “pivot point” when UN peacekeeping transitioned from a primarily European endeavor to one staffed primarily by the global South.

It is our hope that the IPI Peacekeeping Database will be a useful resource for those conducting research on a wide range of conflict and peacekeeping analysis, both on its own and in combination with other traditional and geospatial databases (for instance the Armed Conflict Location Event Dataset a georeferenced African conflict dataset from the Peace Research Institute in Oslo; the Georeferenced Event Dataset from Uppsala University; the georeferenced Ethnic Power Relations dataset from ETH Zurich; and UCLA, Afripop, and Asiapop). By releasing this dataset, IPI hopes to create new opportunities for research within the community of analysts and practitioners of peace operations. We also hope that the data will be useful for policy makers and practitioners in predictive modeling for force-generation targeting.

Chris Perry is a Senior Policy Analyst at the International Peace Institute
About the image: Peacekeepers from UNAMID, October 22, 2012. UN Photo/Albert González Farran