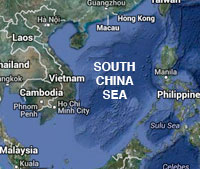 We are at a moment in history when regional spats in Southeast and East Asia over the South China Sea are happening more frequently, while global interest in the region for economic and security reasons is on the rise. In the last two months alone, Vietnam has seen its fishing boats fired upon and rammed by Chinese patrol vessels, and the Philippines Coast Guard shot and killed a Taiwanese fisherman on the northeastern fringe of the sea, which damaged cooperation on a range of issues between Manila and Taipei.

In January, the Philippines exercised its legal right to take China to court over the two states’ competing territorial claims, but it drew strong condemnation from China for doing so. The Philippines’ neighbors and fellow Association for Southeast Asian Nations (ASEAN) states were further dismayed about the consequences of the action, given the group’s economic interconnectedness with China.

Given all that is at stake, how will these countries forge cooperation, and what role will the US, China, and regional institutions play?

The South China Sea has long been a source of conflict for Southeast and East Asian littoral states. While the sea and its islands have always held strategic importance, fisheries, energy, and sea lanes are increasingly being touted as “core interests” for the countries involved. And the region is more and more driven by consumerism: China is the largest user of energy resources in the world; its growing middle class demands the availability of fish at the market, and global commerce depends on goods shipped from and within the region.

The spats in recent months can be tied to two events. The first was a joint submission to the United Nations by Malaysia and Vietnam in 2009 to extend their territorial waters beyond the 200 nautical miles. China, which has claimed most of the sea areas since 1947, saw this as a provocation. The second was the US “strategic pivot” to Asia announced by Barack Obama in 2011, which was seen as an affront on China, which continues to be aggressive in defending its claims.

Yet, in spite of the challenges at present and the high stakes involved, there is cause for cautious optimism toward managing a range of disagreements and disputes if some key steps are taken by regional claimants. Those steps include:

Reviewing the history of the last three decades, regional governments have often found reason to adopt more conciliatory postures, in spite of occasionally coming to blows. China, for one, has often recited Deng Xiaoping’s 1979 statement favoring “setting aside disputes, and pursuing joint development,” and further, it has emphasized the achievement of a “peaceful rise” as put forth by senior party official Zheng Biajin in 2003.

For the region’s smallest countries, creating conditions favorable to cooperation is of even greater importance. In April of this year, Singapore’s Prime Minister Lee Hsieng Loong said at a visit to the White House that Singapore would “help America engage in the region, constructively, productively, and in a way that fosters stability and prosperity of all the countries.”

While the rhetoric is significant, management of the dispute rests on a combination of respect for international law, further strengthening of economic cooperation, strong domestic policy, transparent diplomacy, and more effective military engagement. But none of these areas are sufficient independently for achieving a peaceful outcome.

For example, while international law provides guidelines for discussing barriers to cooperation, it is insufficient on its own in enforcing egalitarian behavior because it fails to acknowledge political, economic, and military realities that allow rules to be circumvented. In practice, the 1982 United Nations Convention on the Law of the Sea (UNCLOS) is the preeminent global legal mechanism with respect to delineating sea territory, but its effectiveness is hampered by China’s unwillingness to agree to submit disputes to international arbitration (as with the case brought against China by the Philippines), as well as the fact that the US is yet to ratify the treaty, thus undermining its legitimacy.

Similarly, ASEAN’s Declaration on the Code of Conduct in the South China Sea (DoC) is a regional guideline that the ten ASEAN members, plus China, have all signed on to. However, the “declaration” is still just that, and while its aim is to foster greater cooperation and ultimately a Code of Conduct (CoC), it includes fairly aspirational rhetoric such as “handle their differences in a constructive manner,” and “the parties agree to work, on the basis of consensus.” Claimant states have thus far been unable to move that dialogue forward to achieve a full-fledged code of conduct governing their behaviors. Indeed, some might argue against taking further steps toward a code of conduct, given the seeming unwillingness of China to acquiesce to multilateral solutions. Cynics argue that, when the CoC is eventually agreed upon, it will be a toothless document.

Economic relations have further diminished ASEAN’s capacity to take a leadership role toward resolving the dispute, and in 2012, for the first time in ASEAN’s forty-five year history, the group’s ten members failed to issue a joint communique at its annual meeting. The reason was that China leaned on its key ally Cambodia–the 2012 Chair of ASEAN–to leave discussion of the South China Sea issue off of the agenda. At that time, the Chinese government said that discussions on the South China Sea issue, and CoC, could continue when conditions were “ripe.”

But Brunei, as ASEAN’s chair in 2013, has proven to be an adept strategist in building consensus between China and ASEAN, and getting the ASEAN dialogue back on track. The ASEAN Summit in April 2013 netted further discussion of the South China Sea issue. Yet, there also remain reasons for concern, given that Myanmar will chair ASEAN in 2014, and Laos in 2015, two countries that have been historically sympathetic to China.

Stakeholders might still be optimistic about managing the dispute in such a way that overall economic and political cooperation is minimally disrupted, but the behavior of China and the United States is central to the final outcome. Leadership in the US and China must find ways to work at empowering each other to find solutions, given the often polarized domestic political debate that exists in both countries. Particularly in the US, the White House must be able to evidence the success of its actions, or else it risks political fallout. Therefore, success may be contingent on China’s willingness to move forward in supporting US policy suggestions.

Both powers can afford policies of strategic ambiguity given their economic importance and military might.But the smaller claimant states and other stakeholders have little choice except to work around these ambiguities in forming policies of their own. This can have disastrous consequences, as states are forced to align themselves with either power, thereby causing further rifts and lessening opportunities to cooperate.

For all of these reasons, a new means for discussion on this issue must be devised. The global community is increasingly scrutinizing the actions between states with interests in the South China Sea area, viewing East Asia as the greatest potential driver of the global economy in this century. A forward-looking approach, which de-emphasizes the unresolvable historical claims espoused by the countries involved, is needed in order to avoid what can sometimes feel like a zero-sum game.

Andrew Billo is an Assistant Director, Policy, at the Asia Society.