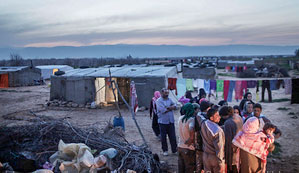 The crisis in Syria has generated a refugee flow of catastrophic proportions. The current figure of over 1.6 million registered refugees in the region is expected to swell to 3.45 million by the end of the year. With thousands of new refugees arriving in neighboring countries every day, the scale of humanitarian need is overwhelming host communities and exacerbating economic, political, and sectarian tensions throughout the region.

In Lebanon, the sectarian identities and political allegiances of half a million refugees from Syria are aggravating long-standing tensions among Lebanese communities. Sectarian violence and cross-border threats are increasing in frequency and intensity, but international assistance could play a positive role in defusing some of the tensions that threaten to overtake Lebanon.

Tension Between Refugees and Host Communities

In Lebanon, there are over half a million registered refugees, as well as over 55,000 Palestinian refugees that have fled Syria. The majority of these have settled in the north and the Bekaa valley1—the most impoverished regions of the country—where tens of thousands of refugees are living in the homes of Lebanese families.

In spite of the economic hardship, local people have provided a huge proportion of the assistance that the refugees need to survive. However, patience is wearing thin. As one Lebanese man told the Norwegian Refugee Council, “With time, the sympathy is fading, because the burden on the [Lebanese] hosting families is getting heavier, and they are starting to be very tired… they are feeling that they are losing the little they had.” Communities hosting refugees have begun to question why refugees are receiving additional international support while (the hosts)… struggle without help.”

The influx has caused a spike in the cost of rent and basic necessities, and a drop in labor costs as refugees accept lower than standard wages. As the economic distortions exacerbate existing poverty in many refugee-hosting communities, and as refugees from Syria become more visible throughout the country, the Lebanese people that welcomed and supported them are beginning to see refugees as a nuisance and, increasingly, a threat.

Political Tensions and the Risk of Escalating Violence

Lebanese society and politics are historically divided along religious and sectarian lines. As refugees arrived in Lebanon, they have settled in communities where they feel most comfortable, leading many to concentrate in areas dominated by their own religion or sect. Refugees also bring with them political allegiances, real and perceived.

As such, religious and sectarian divisions that already existed in Lebanon have been aggravated by the presence of Syrian refugees that are often politically aligned along deeply sectarian lines. The increasingly public participation of Lebanese armed groups in fighting on Syrian soil has exacerbated this already precarious situation.

From the outset of the Syrian conflict, Lebanese people weary of war have been nervous about a spillover of violence from Syria. In April, one host community member spelled out those fears:

“Personally, I see that they [Syrian refugees] are affecting us negatively from a political point of view … many people are bringing their political issues to Lebanon, [which] is already a hotspot and ready to blow at any minute… Their presence in huge numbers is causing political [and] economic [problems] and also affecting the religious balance in the country. The impact is already negative, with more refugees coming to Lebanon, I can see the situation going out of control…”

Instances of cross-border shelling have been a reality in the northern Lebanon area of Wadi Khaled since the refugees began arriving. The community has also endured cross-border attacks, attributed to the presence of the mainly Sunni refugees who are perceived to be affiliated with the opposition forces in Syria.

In Tripoli and the Bekaa Valley, individual incidents of violence, as well as larger outbreaks of fighting between individuals and groups supporting opposite “sides” of the Syrian conflict, are becoming more frequent and more sustained. The involvement of Lebanese fighters in Syria has also become more public.

In particular, Hezbollah—the powerful Lebanese political party and its associated militia—has publically acknowledged its military support of the Syrian government. As a result, the Opposition Free Syrian Army (FSA) has stated its intent to fight Hezbollah on Lebanese soil if necessary.

As the divisions become more widely acknowledged and public displays of sectarian allegiance and support become more prevalent, there is a risk of more acute violence and more frequent retaliatory attacks.

The risk of sectarian violence in Lebanon is linked to complex historical and political issues much broader than the current refugee crisis. However, the presence of half a million refugees, as well as the economic hardships and demographic distortions linked to their arrival are exacerbating that risk.

Managed correctly, the international refugee response could play a critical role in defusing some of these tensions. Refugees and host communities should be involved in the design of aid efforts, and aid organizations need to develop a coordinated outreach strategy to explain the criteria used to identify beneficiaries. This could help dispel misperceptions about political or sectarian preference in aid distribution, and encourage dialogue across community lines.

Erin A. Weir is the Protection and Advocacy Adviser, Middle East Region, for the Norwegian Refugee Council.