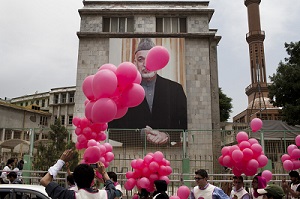 With the help of more than 100 brave Afghan artists and activists, I gave away 10,000 pink balloons to people in Kabul as they commuted to work on Saturday, May 25th. Likely the biggest public art event in the history of Afghanistan, the project painted an unsuspecting town a bright shade of pink, bringing joy and hope to a city that has been deprived of both.

“Saturday Morning” was funded by more than 7,000 individual donors worldwide, who contributed just one dollar each. Yet from the beginning of the project a year and a half ago, people questioned the idea: “Why give away balloons to people in the middle of a war zone? Why not use the money to support the programs of existing NGOs? Why not give these hungry people some fresh fruit?”

In the face of hardship or extreme need, it has become common to want to benchmark the allocation of resources and expect measurable, tangible, and hopefully prompt returns, including from cultural investments. While the allocation of aid, by definition in limited supply, should be conducted in a responsible and sustainable manner, it is equally important to remember that the ultimate aim of any such intervention is often broader than addressing core physical or security needs. Establishing a functioning democracy, rebuilding a nation devastated by war or natural disasters, or re-creating a sense of community in neighborhoods plagued by crime and unemployment requires more than building roads or guaranteeing power supplies, as important as these are.

Having done this project previously in India, Japan, and Kenya, I was once again struck in Kabul by the essential importance of art, and public art in particular, in the quest to bring about social change. Art in the public realm can provide a platform for artists and the public alike to explore new worlds and imagine a different self-identity or a different future. Art can offer a moment of respite, wonder, and reflection that allows the individual to move away from social conditioning into freer, untainted, and unaffiliated space.

It also made me realize the extent to which so little attention is paid to the development of the arts, and therefore cultural change, in post-conflict planning. Yet cultural initiatives are an essential component of a long-term strategy to empower local communities and set in place the conditions for sustainable progress.

Some see public art in countries ravaged by conflict or poverty as “silly,” “meaningless,” or even “harmful.” So it was important in our process to hold tight to the premise that it is this futility of art, its practical incongruence, that is art’s greatest quality, its essential freedom.

Preparing for the project in Kabul, I became more acutely aware than ever that, when creating art in community, there is an inherent need for everyone involved to justify the importance of the work. Through this process, it became increasingly challenging to prevent the art from being co-opted by a rationale that seeks to justify it along strictly economic or political lines, and to maintain its freedom. This is especially true in societies with government-sanctioned media. In addition, in a country where illiteracy is a fundamental barrier to progress, it is important to create opportunities for engagement irrespective of the level of education.

The ability to project one’s interpretation of a work of art ultimately allows individuals to take ownership of the art. It is through participation, engagement, and interpretation that they become one with the art. In a society marked by fear as a result of conflict, fostering a sense of ownership requires initiatives that build confidence through individual action.

Projects like this also create works that live outside of the regimented museum or gallery space, sanitized spaces designed for certain kinds of individuals. By maneuvering outside of said spaces, we allow transformative elements, like the violent attacks by Al-Shabaab in Nairobi and suicide attacks by the Taliban in Kabul, to alter how the public perceives the orchestrations we put forward.

In this case, the act of giving away 10,000 pink balloons generated interpretations linked to peace, reconciliation, gender equality, and the struggle against corruption. The essence of the work lies in the flexibility of allowing all participants to shape the work as little or as much as they are willing. What started off as my project became theirs. Every single volunteer shaped how the city of Kabul was altered that Saturday. Every single one of them borrowed public space and transformed it through their actions.

In that moment, we inherited everything that Kabul is in the mind of people who inhabit it and in the minds of millions of people around the world, who all have preconceived notions about that city. 10,000 pink balloons in the heart of Afghanistan shifted these stereotypes and allowed room for questioning—and for wonderment. And it is through questioning and wonderment that change can come about.

Yazmany Arboleda is a multimedia artist based in New York City.

This is the inaugural entry in the Global Observatory’s new Opinion section, which starts this week.