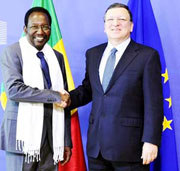 The international donor community is gathering in Brussels on May 15 to consider a request to pledge about 340 million euros ($439 million) in support of “a new Mali.” With significant progress made in constraining the presence and influence of armed groups in the north, it is crucial to focus on the provision of human security for all communities in Mali. It is essential for the political process to be sufficiently inclusive to address the multiple crises facing the country.

The Donor Conference Should Focus on Six Issues:

First, the “plan for the sustainable recovery of Mali,” as submitted by the Malian government to the donors, introduces many important programs to take care of the humanitarian crisis, rebuild the governance of Mali, and ensure the provision of social services. But why is the concept of human security absent in the presentation of these development efforts? The reduction of poverty and improvement of the well being of the Malian people in relation to greater freedom and participation are all elements in a comprehensive approach to strengthen human security, which is the key to undoing the conditions that helped violent extremism gain influence.

Second, the recovery plan of the government does not address how a process of dialogue and mediation can be organized in the coming months to reconcile different aspirations and build consensus between the south and the north, including in particular those communities whose sense of being neglected greatly contributed to the crisis. There can be no development or institution-building in Mali without conscious and designated relationship-building in society.

Third, elections in Mali should be rescheduled if no sufficient human security can be ensured across the country in the coming months. The aggressive occupation of northern Mali has disrupted the social infrastructure, made thousands flee their homes, and caused a significant humanitarian crisis. In the plans submitted to the donors, it is expected that elections will be held before July 31st. In reality, it is hard to imagine that it will be possible to have a voting system in place on the basis of biometric voter registration within the next 10 weeks. Elections are important, but bad elections in which a significant number of the Malian people cannot effectively participate—notably the communities most affected by the crisis—will be a disaster. It will move the country backward rather than forward on the road to recovery.

Moreover, in the likely scenario that elections cannot happen before the end of July, what is plan B? If expectations of an election are created and then disappointed, the perpetuation of a government that lacks legitimacy can easily create a leadership vacuum and another crisis. A realistic planning of the elections and transparent communication to the Malian population about the election process are both urgent.

Fourth, the Mali government will not be able to take on the task of rebuilding the country alone. It will need the active participation of civil society. The government plan is not very explicit on this, other than emphasizing the role of women. The donor conference should take heed of the outcomes of a civil society preparatory meeting, which calls for strengthening the involvement of civil society in the design, implementation, and monitoring of development policies.

Fifth, Mali offers an opportunity for the donor community to finally set an example of better donor coordination. The world has witnessed a series of international agreements and statements all underlining how important it is to coordinate for effective development assistance, but these have rarely moved beyond rhetoric. It would be an important step if the donors could clarify how they will coordinate their efforts, how results will be measured within a common framework, and how their accountability is organized. The results of the International Dialogue on Statebuilding and Peacebuilding (IDPS) offer much of the necessary guidance.

Sixth, resolving the crisis in Mali needs to be put in a regional perspective, at state- as well as non-state levels. Armed groups in the Sahel move from country to country seeking grassy meadows of local grievances to feed on. This can only be addressed if governments, civil society, the international community, and other stakeholders collaborate within a regional scope. When the donors decide to support a new Mali, it has to be accompanied by a commitment to build capacities for providing human security in the West Africa region as a whole, with the Economic Community of West African States (ECOWAS) as the most suitable organization to take the lead.