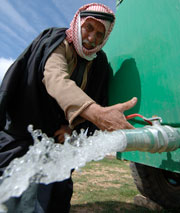 This month, the Hashemite Kingdom of Jordan issued the Arab world’s first national policy aimed at mitigating and adapting to climate change, the first significant revision to the country’s environmental policy since 2005.

However, the climate change mitigation efforts set forth in the policy involve the water and agricultural sectors, both of which are politically complicated and have histories of organizational fragmentation, weak policy implementation, and largely unsuccessful enforcement of resource efficiency policies.

Often mentioned by policy makers and stakeholders in tandem with Jordan’s climate change vulnerability is the issue of water scarcity. Water scarcity in Jordan has been portrayed as the country’s most critical development challenge. The World Bank ranks Jordan the fourth poorest in the world for water resources, and recent figures indicate that the Jordanian average is 145 cubic meters of water per capita per annum, well below the threshold for absolute water scarcity.

To mitigate this scarcity, Jordan has become a vanguard in the region regarding novel water policies, introducing an unprecedented groundwater regulation by-law in 2002 and embarking on “mega” projects like the Red Sea-Dead Sea Canal and the Disi Water Conveyance Project. However, despite a proliferation of demand-oriented policy instruments, water scarcity mitigation policies are routinely circumvented by water theft and other violations committed by a wide range of offenders, including small-scale entrepreneurs, elites, and large corporate farmers.

Water resources are managed by Jordan’s large public sector, where government services, resources, and positions are frequently accessed via networks of privilege; advantageous connections (wasta) and legal immunity for certain elites and interest groups are common. This informal system in Jordanian governance influences the formal political processes, and attempts at institutional change are often thwarted on the bureaucratic level by entrenched sectoral interests and opaque political processes.

As such, vested elite and bureaucratic interests in the status quo could block any attempts to enact the new climate change policy, and these interests are in part why there is a lack of coordination between governmental and donor stakeholders in the water sector, as well as other public sectors.;

In Jordan, scarce resources such as cooking fuel and water are subsidized, and projects undertaken to continue these provisions are no longer sustainable; in fact, the enormous public sector apparatus may have burdened the Jordanian government past its ability to sustain itself. The “social contract” between the Jordanian state and Jordanians—a shifting constellation of actors and social groups that the state relies upon for support—is under extreme pressure. Various actors and interest groups from across Jordanian social and economic strata perceive the allocative mechanisms of the state to be failing or in jeopardy.

Notably, the Ḥirāk al-ʿUrdunī, a loose collection of mainly secular, East Bank Jordanian interest groups, could pose potential impediments to the implementation of the new national climate policy. Since 2010, the East Bank Ḥirāk protests have arisen out of discontent with attempts to change public services in general, including sectors central to Jordan’s climate change mitigation effort: water and energy. Protesters identifying with the Ḥirāk movement have voiced dissent against privatization measures since 2011, and oppose the reduction of the public sector and tariff increases for water, sanitation, and energy commodities. Public concern, voiced in movements like the Ḥirāk, make it politically difficult to make substantial changes, as they believe that the changes will cause a reduction in service provision and limit access to entitlements.

In the recent UN Arab Human Development Report entitled, “The Political Economy of Climate Change in Arab Countries”, John Waterbury references a countercurrent in environmental policy literature that puts the onus on local communities to be the backbone of the policy process, highlighting the importance of real public feedback and input from “end users.” The Jordanian climate change policy mentions strengthening the National Climate Change Council and Ministry of Environment’s capacity for climate change policy enforcement and to increase stakeholder inclusiveness in the institutional framework. Additionally, the policy acknowledges the role of local governments, municipalities, and community organizations as part of the policy process, as well as emphasizing public education as a key component of the national policy’s success.

However, the national climate change policy fails to make substantive mention of the anthropogenic root of Jordan’s problem: namely, placing state institutions in the driver’s seat of environmental and climate change policy. The policy as it stands does not address the informal structures that persist as an operational component of Jordanian bureaucratic institutions. On the contrary, it perpetuates the trend of investing in and allocating responsibility to governmental institutions that may lack the will and the ability to implement such a national plan that could go against deeply entrenched domestic political interests.

The national policy does suggests that the state’s policy makers extend their reach outside of Amman to interface with loci of real power and address the unsustainable provision of the East Bank entitlements; if this is done, the Jordanian climate mitigation schemes would have some hope of coming to fruition.

Allison Hartnett is a DPhil candidate at the University of Oxford in the United Kingdom.

About the photo: A portable water tank gets some use near the village of Ader, Jordan, 2007. Photo credit: USAID/Flickr