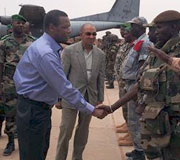 From May 19-27, 2013, the African Union (AU) will hold its 21st summit in Addis Ababa. It will celebrate the 50th anniversary of the founding of the Organization of African Unity (OAU) under the theme of “Pan-Africanism and African Renaissance.” It will also be almost ten years since the creation of the AU.

When the United Nations (UN) Secretary-General Ban Ki-moon addresses the assembled heads of states and governments and representatives of the AU Commission, he will likely praise the remarkable strides made by the African continent and the dynamic partnership between the UN and the AU to address peace and security challenges in Africa.

Yet, just as UN-AU collaboration seemed to have reached an all-time high, a recent AU Peace and Security Council communiqué revealed new tensions in the relationship. The communiqué expressed concerns about UN Security Council resolution 2100 which authorized the creation of the UN mission in Mali (MINUSMA), stressing that it “…is not in consonance with the spirit of partnership that the AU and the United Nations have been striving to promote for many years.” This came just one month after another AU statement expressed support for the transformation of the African-led support mission in Mali, AFISMA, into a UN operation. What happened to change the AU’s position?

The crisis in Mali has exposed important differences between the African Union  and United Nations. In December 2012, UN Security Council resolution 2085 authorized an African-led International Support Mission in Mali (AFISMA). However, in light of the slow African response, and at the request of the Malian authorities, on January 11, 2013, France launched Opération Serval, a military intervention to stop the rebel advance and recapture major urban settlements in the north of Mali. Opération Serval created new facts on the ground, and AFISMA’s deployment timetable was accelerated from the originally planned date of September 2013. The subsequent deployment of African troops was supported by voluntary contributions made at an emergency donor conference on January 29, 2013, in Addis Ababa.

Shortly afterwards, in February, a joint UN-AU-ECOWAS planning conference in Bamako finalized the revised and harmonized AFISMA Concept of Operations (CONOPS), which was adopted in March 2013 with the mission strength set at nearly 9,450 uniformed personnel. The door was also opened for the creation of a UN peacekeeping operation in Mali, which would take over from AFISMA.

On March 7, 2013, the AU expressed support for the envisaged transformation of AFISMA into a UN operation, as long as it conformed to a number of parameters. These included:

i) “a robust mandate based on Chapter VII of the UN Charter, defined in consultation with Mali, the AU, and ECOWAS… including the fight against criminal and terrorist networks operating in the North of Mali”;

ii) “the UN … consult closely and adequately with the AU and ECOWAS throughout the proposed transformation process of AFISMA into a UN operation, as well as the appointment of the future Special Representative of the Secretary-General who will lead the planned Mission in a spirit of continuity”;

iv) “support for the central political role of the AU and ECOWAS.”

One problem is that MINUSMA will not conduct counterterrorism tasks directly, as the AU had called for. Instead, it will rely on a parallel French force to continue combat operations. This stems from the divergent philosophies of peace operations evident at the UN and the AU. African states–including the troop-contributing countries to AFISMA–have displayed a willingness to engage in peace enforcement activities on the continent and criticized UN operations for being risk averse and lacking consistency regarding the use of force against “spoilers.” This was further reiterated after the creation of the new Southern African-led “intervention brigade” within the UN mission in the Democratic Republic of the Congo, MONUSCO.

Another source of tension stems from the fact that the AU’s requests concerning key personnel may have been ignored. While there has been speculation that Albert Koenders, the current Special Representative for the Secretary-General (SRSG) and Head of the United Nations Operation in Côte d’Ivoire, might become the future head of MINUSMA, disagreements between the UN and the AU over senior mission leadership appointments (the head of mission, his/her two deputies, the force commander, and police commissioner) appear to have delayed official announcements. On January 30, the AU chairperson had appointed Pierre Buyoya, already the AU High Representative for Mali and the Sahel, as her Special Representative and Head of AFISMA in the hope that he would then become the SRSG for MINUSMA.

A third source of tension revolves around the Security Council’s decision not to follow the AU’s request to create a UN-funded support package for AFISMA as it had done in the case of Somalia (through the UN Support Office for AMISOM).

A fourth sticking point is that resolution 2100 made the deployment of the MINUSMA contingent on certain criteria being met on the ground, including the cessation of major combat operations (paragraph 8). This left AFISMA unclear on whether it would operate until the end of its mandate (in December 2013) or be replaced by MINUSMA on July 1, or at another as-yet-unspecified date. This has already caused bureaucratic problems in hiring personnel and ordering logistical and supply services. Resolution 2100’s reference that only those AFISMA troops that are “appropriate to United Nations standards” (paragraph 7) would be integrated into MINUSMA raised a further source of contention among African troop contributors.

Finally, the AU may also have felt sidelined by the fact that the inclusive negotiation process would now be “facilitated by the Secretary-General, in particular through his Special Representative for Mali when appointed … in close collaboration with the AU, ECOWAS and the EU Special Representative for the Sahel” (paragraph 4). This is far from the “central political role” the AU was hoping for, especially if the current head of AFISMA does not become the head of MINUSMA.

It was this chain of events that explains why, on the same day the Security Council passed resolution 2100, the AU Peace and Security Council condemned it, noting with concern: “that Africa was not appropriately consulted in the drafting and consultation process that led to the adoption of the UN Security Council resolution authorizing the deployment of … MINUSMA to take over AFISMA, and stresses that this situation is not in consonance with the spirit of partnership that the AU and the United Nations have been striving to promote for many years, on the basis of the provisions of Chapter VIII of the UN Charter.”

Once again, positive examples of UN-AU collaboration have been overshadowed by tensions which reveal considerable mistrust between the two organizations. They must therefore recognize that no amount of coordination mechanisms will completely prevent the political frictions that are bound to occur when controversial peace and security challenges are discussed. Nevertheless, as we make clear in our recent International Peace Institute report, “Peace Operations, the African Union, and the United Nations: Toward More Effective Partnerships,” the two organizations should continue to improve their bureaucratic interactions, and the AU should strengthen its capacity to articulate a timely, coherent, and effective voice in New York.

Arthur Boutellis is a Research Fellow at the International Peace Institute. Paul D. Williams is an Associate Professor in the Elliott School of International Affairs at the George Washington University.

About the photo: Pierre Buyoya (in the blue shirt), the Special Representative of the Chairperson of the African Union (AU) Commission and Head of the African-led International Mission in Mali (AFISMA), visits AFISMA troops in Gao, Mali on April 5, 2013. Credit: African Union