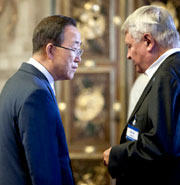 “The political process is lagging dangerously behind the military effort” is the key sentence in a new report by the UN Secretary-General on Mali. The primary problem underlying the Mali crisis has been poor governance and a lack of human security. The French-led military intervention has pushed back violent extremism which, however, has been an outcome rather than a root-cause of the crisis. It is indeed urgent to now focus on the restoration of the unity of the Malian state based on credible national institutions working for all Malians.

The Secretary-General’s report suggests two options for proceeding in Mali. The UN can work alongside the African-led International Support Mission in Mali (AFISMA), or AFISMA can be “re-hatted” as a UN mission under Chapter VII. The report proposes the establishment of a force of 11,200 UN peacekeepers, as well as the deployment of a special counterterrorist unit. Initial discussions in the Security Council on March 28 seemed to indicate support for the establishment of a full-fledged UN peacekeeping force, though at present this has not yet been decided.

The situation in Mali remains extraordinarily complicated, and reshaping the international engagement into a UN peacekeeping operation will not be easy. What are the main issues the Security Council need to consider in response to the Secretary-General’s report?

First, the UN has to take a clear position on the need to fundamentally reform the Malian military. Since March 2012, the Malian military has staged a coup, unseated the interim-president, fought internal battles, and conducted a number of documented violations of human rights against ethnic and religious minorities. Above all, why did the Malian military, when it mattered most, fail to protect the people and territorial integrity of Mali?

Just after the French invasion, Gen. Carter Ham, the head of the US Africa Command (AFRICOM), made a blunt admission regarding the failure of years of US military training to instill respect for human rights in the Malian army, saying that most US training for the Malians focused on tactics, strategy, and “technical matters.”

The Secretary-General’s report does recognize the “major long-term challenge” of transforming the Malian military. However, it also calls for “rapidly building the capacities” of the Mali defence and security forces and welcomes the recruitment of 3,000 additional troops. The European Union is expected to make a major contribution to the necessary trainings, which started last week.

At this critical moment, the UN should acknowledge the extent to which the Malian military are a part of the problem and prioritize structural reform over technical training. If there is no such message and plan from the international community, the Malian military will gladly enjoy the benefits of new hardware and trainings, but continue to feed the instability in Bamako and elsewhere.

Second, the UN needs to take distance from the idea that elections in Mali can be held in July this year. The July timing is part of a road map for transition, as approved by the Mali Parliament in January. The Secretary-General’s report is ambiguous on this issue as well. On the one hand, the report sees elections in July as “extremely difficult,” especially in the north. On the other hand, the idea is not rejected, and the report recommends “as a matter of urgency” the creation of a “political atmosphere conducive to credible and peaceful elections” within the April to July 2013 time frame.

Mali is at the onset of a herculean effort to bring together different communities through a process of national mediation and dialogue. Apart from the priority to restore relationships within society first, the voter registration and technical preparations for elections will take months. It is unthinkable that meaningful elections can take place by July this year, and the UN should not support any such expectations.

Third, the mandate and status of the parallel force to be established in addition to the UN stabilization mission needs to be clarified. The UN is anticipating continued attacks on the UN mission by non-state armed groups, or “asymmetric threats” in the language of military planners. These threats would need to be dealt with by a parallel force operating in Mali, but “possibly in the region,” conducting major combat and counterterrorism operations, “beyond the scope of the UN mandate and capability.”

The solution resembles the recent approval by the Security Council to establish a designated “intervention brigade” within the purview of MONUSCO in the Democratic Republic of Congo. However, the description of the parallel force is vague in the report on Mali. If this force is going to be crucial for the success of the UN effort, we need to know more about it. What is this force expected to accomplish, how big does it needs to be, and within which territory and under whose responsibility and leadership will it operate?

Fourth, the recognition of the regional nature of the crisis leaves room to increase the role of ECOWAS and the African Union as the primary bodies to take responsibility for resolving the conflict. The risk of the UN taking over the lead of the international intervention is that it will not have the breadth, the political will, or the resources necessary to sustain a long-term solution. Regional intergovernmental bodies are better suited to do that, and they deserve a more prominent role than ascribed to them in the Secretary-General’s report.

Fifth, the report recommends a national dialogue “without delay.” Civil society is expected to make an important contribution in this regard by helping to build the necessary trust and cohesion. However, the report fails to recognize that here, too, the regional framework is important, as the communities to be reconciled live well beyond and across Mali’s borders. Strengthening the regional approach to the Mali crisis is essential.