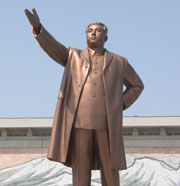 Recent weeks have seen an almost daily rise in tensions emanating from North Korea. The international news carries headlines with increasingly acrimonious declarations made by the leadership in Pyongyang, leaving the world to wonder: it barks, but can it bite?

Some observers have concluded that all this hostility is directed at a domestic audience, intended to garner support for the still-green leadership. Others say that it may be intended for the Chinese, who have recently upset the North Koreans by backing the latest UN Security Council resolution. Still others believe that it is directed at South Korea’s recently elected leader (and relative hardliner) Park Geun Hye. It is more likely a mix of all three, and much more.

The principle issue is whether or not the latest violent rhetoric will turn into actual violence. To answer this, we need to ask some hard questions and try to move analysis beyond the usual stereotyped scenarios and convenient characterizations of “evil” nations.

Let us start with the question: what has actually happened? The latest barrage of threats has largely revolved around three themes: the communication of military mobilizations and citing of targets, the scrapping of the 1953 armistice, and the cutting of communication lines.

How serious is any of this? From a military perspective, anyone who has ever played the board game “Risk” knows that if you are going to attack, the last thing you want to do is tell the world about it. The 1953 armistice has been reneged on so many times in the past thirty years, it is a wonder there was any of it left to scrap. The communication lines have also been cut before, but more importantly, there is still one channel of communication left–the one used by the civilian aviation authorities in both countries. Technically, they can still communicate.

So, if it is not serious, what is the point? The point is the game, and the game is chicken: North Korea raises tensions; the US and South Korea play it cool; the North pushes a little more; someone gets hurt (usually a fisherman on a small island in the Yellow Sea, but it could be more); and then it all stops.

It may seem pointless, but through that game of chicken, very crucial boundaries are set. The North knows how far it can go. Kim Jong-un is testing the new administration in the South and the new US Secretary of State John Kerry to find out what limit they have in mind.

What happens next? Traditionally, once boundaries are set, interested parties return to some kind of bargaining table, where the US and others dole out concessions while Pyongyang pretends to give up nuclear and/or missile proliferation. Interestingly, this time around it is the South that appears less happy to tow the party line, with talk of shooting down statues of the sacred Kims in the North. The US will have a harder time cooling the Republic of Korea military down than in the past, especially if the boundary is set further than the South Koreans are willing to stomach.

What is China’s role in all this? China is emerging as the big winner. The more hopeless the situation becomes, the more everyone turns to China to “mediate.” Thanks to this crisis, the country is assuming more responsibility in the region, which is its objective. Incidentally, a dangerous North Korea also keeps the US military in Japan, which is also China’s objective. China has been making a slow but decisive change from being an economic power to being an economic and military power. It has chosen its immediate neighborhood for exercising this strategic shift, and North Korea and the many island disputes in the region’s waters are all being played to that end.

What is the risk of the situation getting out of control? North Korea will use nuclear weapons or carry out a significant attack only if it is in danger of extinction, as a last resort. As I have argued elsewhere, they will be in danger of extinction only if the geopolitics of the region changes. There are two ways that can happen. The first is if the US and China decide to go from being commercial partners to military enemies. Most would agree that this is not likely to happen any time soon, but then again, as any good “Risk” player knows, such a shift would probably not be advertised.

The second is if the US and China decide to go from being competitors to being collaborators in the regional power architecture. This scenario is also unlikely; however, if they do become friends, there will be no more use for North Korea as it is, which means the Pyongyang regime will be in danger of extinction and may rely on measures of last resort. In sum, as long as the US and China are geopolitically competing commercial partners, the risk of a nuclear attack from North Korea is very low.