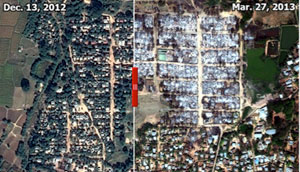 Within a week after sectarian riots and arson attacks tore through central Myanmar, conflict monitors and human rights advocates could see the damage via satellite images and tally the number of buildings burned and acres destroyed. In the not-so-distant past, similar data collection required weeks or months of field surveying and interviews with victims and observers; in some cases, post-conflict documentation was delayed for years by government prohibitions on investigations, as well as ongoing violence and safety risks. But the use of geospatial technology such as satellite imagery is rapidly changing human rights monitoring and conflict prevention work, making detailed documentation of violence and rights abuses possible almost in real-time.

On April 1, just one week after the latest sectarian violence in Myanmar, Human Rights Watch published satellite images of the three areas inside the city of Meiktila where much of the violence was concentrated. The resulting before-and-after images from March 27, 2013 (after the violence) and December 12, 2012 (before) serve as shocking and detailed documentation of the impact of the violence. Using these images, Human Rights Watch estimated that 828 buildings were destroyed and thirty-five were severely damaged. In total, over sixty acres of largely residential structures were destroyed. The satellite images leave no doubt that such severe outbursts of sectarian violence threaten Myanmar’s democratic reforms and progress since the regime change in 2011.

The release of such images is a relatively new development for human rights NGOs and scientific organizations, which are now capitalizing on the widespread use of free geospatial visualization technology such as Google Earth. Several years ago, only the data resulting from satellite analysis was released, such as the number of homes destroyed. Organizations now rightly release the full satellite images and analysis; they can construct a “slide view” which shows the dramatic before-and-after photos in a way users can interact with, and where no training or particular technological skill is required to interpret the images and grasp the scope of devastation.

Combining satellite technology with social media campaigns can exert pressure on international groups and decision-makers to take action that prevents conflict. For instance, satellite-based early warning systems can alert aid organizations and natural resource management groups to impending shortages, toward preventing conflicts over land, water, and resources. Engaging people on these issues through social media encourages an early and preventative response from both global observers and the local community.

In 2010, working from a similar rationale, John Prendergast and George Clooney launched the Satellite Sentinel Project which uses satellite monitoring to expose aggressive preparations in Sudan such as troop movements and shipments of heavy weapons. This information is shared not only with humanitarian workers and peacekeepers, but also with the global public, who are encouraged to pressure politicians and policymakers into action.

The American Association for the Advancement of Science (AAAS), a global scientific society founded in 1848, operates a program on Scientific Responsibility, Human Rights, and Law that is a leading source of conflict-focused satellite imagery and analysis. AAAS has completed case studies and explored applications for geospatial technologies in more than twenty-five countries and conflict zones. They have used the technology to uncover past atrocities by finding satellite images of a mass grave in Afghanistan and landscape evidence from the Dirty War in 1970s Argentina; they have also corroborated reported attacks on civilians and ethnic minorities shortly after they occurred in Ethiopia, Kyrgyzstan, Sudan, and Syria.

AAAS analyzed violence targeting civilians in the Democratic Republic of the Congo (DRC) in a case that offers several lessons for future applications of satellite technology. In May 2009, armed rebels from the Democratic Forces for the Liberation of Rwanda (FDLR) conducted a series of attacks in Busurungi, on the southern border of North Kivu. The UN mission in the DRC (MONUC) investigated the aftermath of the attacks, interviewed survivors, and condemned the violence. But due to the remoteness of the region and security risks, a full analysis of the devastation and civilian impact of the attacks proved difficult. In analyzing just 100 square kilometers of cloud free satellite imagery, AAAS located close to 1,500 destroyed structures in the area as well as evidence that the violence was ongoing. This supported advocacy efforts to increase civilian protection in the area.

Still, the comparative analysis was delayed from the time of the attacks in May until September, undermining the opportunity for immediate conflict prevention and civilian protection advocacy. To complete the analysis, AAAS had to request and acquire new satellite imagery of the attack zone in Busurungi. Regularly updated satellite imagery in regions prone to conflict is crucial for effective use of this technology, so that composite images and comparative analysis can occur quickly after reports of violence. The speed of the satellite images documenting destruction in Myanmar in late March is ideal for global efforts to end conflicts sooner. Maintaining satellite imagery in conflict zones is also important in the months following violence, as predictive capabilities are continually being developed to point to outbreaks of conflict before they happen. As in Busurungi, satellite images can be used in the long term to monitor outbreaks and document whether destruction of homes or attacks on civilians are ongoing.

While the visual impact of these images is clear, scientists and advocates need to further develop uses of geospatial and satellite technology for conflict prevention. Predictive and long-term monitoring capabilities are important, as are advocacy strategies to present comparative satellite analysis to interested actors and Internet users worldwide. Already, satellite imagery can dramatically increase the impact of human rights and conflict documentation, offering fast and conclusive evidence when violence occurs.

About the photo: Before-and-after images posted by Human Rights Watch show buildings destroyed or severely damaged by violence that began on March 20, 2013 in Meiktila, Myanmar.