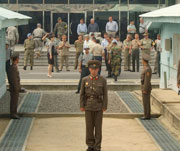 In its latest attempt to raise war fever on the peninsula, North Korea has asked foreign embassy personnel to consider evacuating. But the North’s overheated rhetoric is obscuring a real threat posed by its nuclear and missile potential. Its nuclear test on February 12 showed it is on the way to perfecting a compact weapon capable of being mounted on a missile. It now says it will restart its nuclear reactor at Yongbyon to generate plutonium, and will continue enriching uranium for weapons. And it may be moving to test-launch a new missile capable of reaching Japan or possibly Guam.

The nuclear test set off renewed talk in Seoul and Tokyo about nuclear arming of their own, prompting Washington to try to reassure its allies through deterrence. Yet, doing so has done little to make Korea or the region more secure.

After China cooperated with the United States last month to draft a UN Security Council resolution tightening sanctions, the North did what it always does when Washington and Beijing work in concert: it tries to provoke their discordant reaction by raising tensions.

When Beijing moves to calm Pyongyang, many in Washington criticize the unwillingness to bring the North to its knees as evidence of Beijing’s duplicity. Yet, antagonizing Beijing will only deepen insecurity in Northeast Asia, not put more pressure on Pyongyang.

The threats from Pyongyang also came in response to a military exercise by Washington and Seoul; one that, unlike those in previous years, included practice bombing runs by B-52 and B-2 bombers. The North Korean threats all seemed intent on underscoring deterrence of its own  and are explicitly predicated on prior action by the United States or South Korea. But its rhetorical deterrence is no match for the real military advantages that Seoul has on land, at sea, and in the air.

The danger is that as armed forces on both sides conduct exercises, the rhetoric can have unintended consequences if it leads them to shoot first and ask questions later.

In the midst of the DPRK’s rhetorical volleys, the foreign ministry spokesman on March 16 reiterated its longstanding negotiating position: first, it “will never reach out to anyone to get it recognized as a nuclear weapons state in the future.” Second, “The US is seriously mistaken if it thinks that the DPRK had access to nukes as a bargaining chip to barter them for what it called ‘economic reward.’” Third, “its nuclear weapons serve as an all-powerful treasured sword for protecting the sovereignty and security of the country” and are not negotiable “at least as long as the US nuclear threat and hostile policy persist.”  The nuclear threat could end with an end to the “hostile policy.” In short, its nuclear diplomacy is not about money but about reconciliation.

On March 31, however, Pyongyang announced a “new strategic line” laid down by Kim Jong-un on “carrying out economic construction and building nuclear armed forces simultaneously,” and said it would restart its shuttered reactor at Yongbyon to generate more plutonium as well as producing weapons-grade uranium at its nearby enrichment plant. It said that “the nuclear armed forces should be expanded and beefed up qualitatively and quantitatively until the denuclearization of the world is realized.”

Last week, Washington decided to dial down the temperature, but it has yet to rethink its strategy. That rethinking would begin by acknowledging that the very steps that each side in Korea takes to bolster deterrence increase the risk of deadly clashes, as was shown by the sinking of the Cheonan in March 2010 in retaliation for the November 2009 shooting up of a North Korean navy vessel, and a November 2010 artillery exchange in the contested waters off Korea’s west coast.

In short, deterrence alone will not assure calm on the peninsula. The way to reduce the risk of further clashes is a peace process in Korea in parallel with renewed negotiations to rein in the North’s nuclear and missile programs. Pyongyang has long said it wants a peace treaty ending the Korean War. Probing whether it means what it says is in South Korean and US security interests, especially now that North Korea is nuclear-armed. Whether the new strategic line of March 31 has ruled out negotiated limits on its nuclear and missile programs needs to be probed as well.

The second problem is that the steps taken to reassure US allies antagonize China–joint exercises that include flights of B-52 and B-2 bombers or the dispatch of aircraft carriers to Korea, expanding missile defenses, and helping South Korea to develop longer-range ballistic missiles to add to the long-range cruise missiles it recently deployed. It is utterly unrealistic to expect China to abandon North Korea as the United States moves to shore up its alliances.

No chorus of disclaimers from Washington will persuade Beijing that the US military rebalancing to Asia is not aimed at containing it. Washington needs to accompany it with a political and diplomatic rebalancing toward China, and encourage its allies to do the same. Cooperation has to be a two-way street.

A sustained effort at rapprochement could include bilateral discussions of urgent security issues, among them addressing the two states’ mutual vulnerability through mutual restraint in the domains of cyberspace, nuclear weaponry, and space.

The only way to head off looming instability in Asia is to try to move toward peace in Korea and rapprochement with China. Sustained diplomacy and political rebalancing may not succeed, but unlike more stringent sanctions, more muscular deterrence, diplomatic disengagement, and military rebalancing, they just might work.

About the photo: The north-south border looking to Paju, South Korea, from the North Korea side, September 2007. Credit: Flickr/Will De Freitas