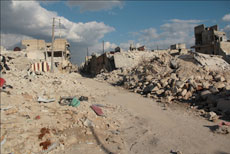 Human Rights Watch’s latest report “Death From the Skies” on atrocities in Syria covers the aerial attacks perpetrated by the Syrian security forces. Since these started in July 2012, they have only intensified to a disastrous effect on the Syrian people, killing at least 4,300 civilians, according to a source it quotes. In the report, 59 specific aggressions are documented, among them repeated—and therefore deliberate—attacks on hospitals and bakeries, which, under the current circumstances in the country, are two key institutions keeping war-torn areas from a complete societal breakdown. They also record the indiscriminate use of force, including cluster munitions and incendiary bombs in densely populated areas, providing the hard data behind the widely circulated images of streets lined by rows of buildings turned to rubble.

What makes this situation more desperate, however, are the obstacles that international parties concerned with the conflict in Syria, such as Human Rights Watch (HRW), face in acting, if not to solve, to at least alleviate the conflict. Since protests and their repression—the latter unstoppably fuelling the former—started in earnest in early 2011, HRW has gone to great lengths to cover the terrible bloodshed in Syria: the New York-based organization has produced seven reports and dozens of press releases denouncing the atrocities. Perhaps reflecting a sense of helplessness and pessimism shared by all parties involved, the pace of production seems to have slowed down somewhat; nine months have passed since their previous report, “Torture Archipelago.” This is possibly the result of the fact that they cannot say things more clearly or loudly than they have already; the horror hasn’t stopped—if anything it has intensified—and there is little that is new about it.

There are serious and mounting challenges to covering Syria. Other than the high levels of violence, HRW is actually banned from the country by the regime. HRW is quite open about this specific—and quite fundamental—constraint, which limits its fieldwork to the rebel-controlled areas. In the press release presenting “Death from the Skies,” they state clearly that “Human Rights Watch was able to visit only sites in opposition-controlled areas in northern Syria because the government has denied Human Rights Watch access to the rest of the country.” One consequence of this ban is that HRW’s capacity to document the atrocities carried out by the rebels is severely curtailed.

Another important omission—central to the current debate over Syria at the UN, and again a reflection of the paralysis afflicting external actors in this conflict—is that the report mentions nothing about the use of chemical weapons. Their use by the Syrian regime is the red line drawn by President Obama that would be a game changer, potentially provoking the US to intervene, and so recent allegations have caused a great deal of tension among members of the Security Council, with Russia being particularly sensitive to any discussion of the issue. After the Western participation in the war in Libya, which it interpreted as an abuse of the Security Council resolution that sanctioned it, Russia has consistently and staunchly opposed any military intervention in Syria.

Indeed, some at the UN argue that the sequence of events in Libya, hailed as the most palpable example of the “responsibility-to-protect” doctrine—otherwise known as R2P—is actually the nail in the coffin of this concept, given that Russia will never again allow a similar resolution to pass at the Security Council. The “Libya model” is nevertheless still being pushed by those trying to precipitate a more forceful intervention in Syria, which in turn provokes a heated debate as to the differences and similarities between the two.

Thus, HRW provides in this report no fodder for this particularly heated controversy and decided to make no mention of chemical weapons in the report because it says there is simply no evidence—neither the regime nor the rebels, who accuse each other of the use, have substantiated their claims with anything more than inconclusive images and personal testimonies. The organization is certainly not restraining itself in order to appease Moscow; HRW singles out Russia repeatedly—together with China—for blocking any attempt to pressure the Syrian regime to cease the violence and calling on Iraq to intercept planes and convoys coming from Russia and Iran that might be supplying weapons to Bashar al-Assad’s forces. Baghdad has in fact been complying with the demand to inspect suspected planes coming from Russia and Iran, renewing and intensifying the searches during the past weeks —how thoroughly they are doing this, however, is hard to say, since for now at least they are doing without the “independent, third party monitors” that HRW calls for.

However, the sense of impotence by the international community, particularly at the Security Council, does not mean that concerned actors are sitting with their arms folded; on the contrary, there is a flurry of activity. While the investigation of chemical weapons remains blocked, some of the countries at the UN most invested in seeing the end of the Assad regime continue to focus on establishing a presence for the Syrian opposition in Turtle Bay, which would constitute a platform for an attempt to take over Syria’s UN seat. However, replacing the representative of a country that still maintains, at the very least, substantial control over the territory by an organization that has highly questionable legitimacy would set a dangerous precedent.

Beyond this diplomatic maneuvering at the UN, countries are also acting by omission. For example, while the US appears to hesitate, riddled with bureaucratic issues surrounding what sort of aid to provide, some question the fact that it is doing nothing to rein in the Gulf states, which are financing the opposition and funneling aid, both humanitarian and military. The US is thus avoiding the controversy over the provision of weapons—particularly the question of in whose hands these could fall—or even direct intervention and also dodging responsibility over the troubles this might bring further down the line. These countries are not only directly supporting the Syrian rebels, they are also doing so through the League of Arab states, which, since the beginning of the uprising, has, according to one European diplomat, become a second Gulf Cooperation Council, due to the dramatic rise in influence of the Gulf states in it.

The curse of Syria is therefore doubled: not only is the country being brutally dismembered with unfathomable pain, but the international community is being prevented by circumstances and competing agendas to engage constructively and transparently, which in turn is producing a series of unilateral, competing, and often self-serving maneuvers. Consensual and coordinated action is preferable; not only does it have higher chances of success, but it also is often more likely to represent the interest of Syrians themselves.

This, however, still appears to be nowhere in sight.  The choices are all grim; good alternatives, nonexistent. To act or not to act both carry terrible consequences. The lethal dilemma surrounding Syria is again embodied by the HRW report, which wraps up its recommendations with disarming frankness, recognizing its own limitations: “Human Rights Watch has not taken a position on whether the international community should intervene with military force to protect civilians in Syria. As concerned states weigh the potential costs and benefits of such measures, they should at least act on the recommendations contained in this report.”