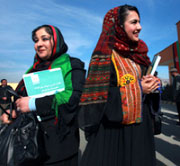 Since 2001, the international community and the Afghan government have been actively engaged in the promotion of gender equality, women’s rights, and human rights. Men and women were accorded equal rights in Afghanistan’s constitution.

However, with international assistance gradually reducing—and along with it, the mechanisms for accountability—it is becoming increasingly apparent that the implementation of processes to improve the situation of women in Afghanistan is lagging behind the ambitious conceptual framework created by the international community and the Afghan government over the past decade.

The question arises whether the gains made for Afghan women are tangible and sustainable or rather symbolic and superficial, and further, whether the implementation of the current women, peace and security agenda in Afghanistan can actually progress, or whether substantive rethinking will be required to establish a new concept that would lend itself to a more realistic and tangible approach in order to allow women full participation in society and political processes.

Since 2001, the international community and the Afghan government have been actively engaged in the promotion of gender equality, women’s rights, and human rights. Women now feature prominently in the government, with a 25% quota for women in the Lower House and a 17% quota in the Upper House of Parliament. Women participate in the private and non-governmental sectors, and have assumed roles in Afghanistan’s National Security Forces. Women have been integrated in the government’s policy and institutional framework, participating in political, governance, and economic processes. In many parts of the country, girls and aspiring young women have access to education and work. Women speak publically at national and international events, and many women organisations cater to the needs of their fellow citizens.

Post-2001, the Afghan Ministry of Women’s Affairs was established to oversee the formulation and execution of government-wide gender policies and gender mainstreaming in all ministries and governmental institutions, while another important body, the Afghanistan Independent Human Rights Commission, continues to monitor and report on the current human rights situation in Afghanistan. In 2008, the National Action Plan for the Women of Afghanistan that sets out an operational framework for furthering gender equality and women’s empowerment under the Afghan National Development Strategy framework was put in place. Afghanistan is a signatory to the UN Convention on the Elimination of Violence Against Women and the Universal Declaration of Human Rights.

While topics such as gender, women’s rights, and human rights feature prominently on the international agenda, the actual approach that seeks to integrate women into processes concerning peace and security has made only minimal advances. The representation and active participation of women in the political, economic, and social spheres remain limited, reflecting the highly volatile and uncertain future of over 50% of Afghanistan’s population.

An important milestone to define the relationship between Afghanistan and the international community, particularly in post-2014, was the 2012 Tokyo Conference on Afghanistan. However, and despite the fact that many partnership agreements have been signed since, committments on gender equality, human rights, and women’s rights remain worryingly short on detail.

With the transition process well underway, experts argue that women will not be able to consolidate their gains in a militarized environment and go as far as suggesting that the increasing military intervention Afghanistan experienced actually enhanced the insurgency and thereby increased the insecurity of women and girls–a development that could already be seen in 2005/6. The women of Afghanistan, whether in public or in private, express great concern over the withdrawal of troops in 2014, fearing that this abandonment will erode the gains made over the past decade.

A central piece to the 2014 debate is the Afghan-led peace process and the question of what potential prospects for reconciliation could be.

Following the 2010 Peace Jirga, the High Peace Council of Afghanistan was established and currently comprises 70 members, out of which 9 are women. In September 2011, the High Peace Council’s Joint Secretariat issued a Gender Policy for the Afghan Peace & Reintegration Program (APRP). The policy recommends the establishment of a gender balance in the composition of peace and reintegration institutions and gender mainstreaming of the APRP as a whole. Somewhat ironically, the policy also recognizes that discrimination against women has kept them from participating in a peace and reconstruction process.

Women play a crucial role in the prevention of violence, the resolution of on-going conflict, and the rebuilding of post-conflict societies; however, the limited number of women at both the decision-making level, as well as at the provincial level, will most likely not cater to a balanced participation and open dialogue that would be required for linkages between women from all parts of society and simultaneously cater to the establishment of networks that could allow for full recognition for the role of women and ensure their empowerment in post-conflict rehabilitation.

Further and very pertinent to the context of Afghanistan, the traditional view of women and the absence of a women’s grassroots support network or social movement can be regarded as the main reasons why women have so far been unable to participate in various processes and to exert more influence overall. Whereas in urban centers, effective women networks have established themselves, rural Afghanistan remains removed from most of these processes. The security situation and threats against women prevent stronger linkages between the urban and rural contexts.

Not too long ago, while visiting a community on the outskirts of Kabul for a women’s tea round, the conversation turned to the withdrawal of foreign troops in 2014. To my great surprise, these women neither knew of this “intention” nor that “peace” was being negotiated with the Taliban. A return to Taliban times, as they came to see this process, would yet again compromise their already limited standing.

In my opinion, Afghanistan has yet to arrive at that juncture where gender equality and women’s rights can actually reach traction within society, rather than remaining superficial processes that are perceived by some as foreign impositions. The approach chosen for Afghanistan was certainly well intended, but is simply too inappropriate for the social context within which Afghan society currently exists.

Having said this, I do believe that there are several avenues that could be explored to define a path towards gender equality and the empowerment of women. Next to educating women in general and specifically on their rights by reaching out to communities, one way to accelerate the process could be to educate men on the rights of women, making them understand that empowering women would improve the overall quality of life.

Further, the status of Afghan women can be lifted through economic empowerment. Women who work and participate in the public sphere usually gain a higher standing within their family and respective communities and are therefore more likely to be involved in decision-making processes.

Most importantly, whatever the approach may be, the relevant actors within Afghan civil society should be in charge of the process from beginning to end, in order to foster a culture of follow up and accountability and thereby achieve sustainability in the long term.

Despite ample mechanisms, policies, and processes in place, integrating the women, peace and security agenda into country-specific approaches remains a very challenging undertaking, and in the current context of Afghanistan, it becomes apparent that women—50% of Afghan society—remain excluded from the political process.

Ayscha Hamdani is an independent consultant in international affairs with a focus on developments pertaining to Afghanistan, the greater South-East Asia Region and the Middle East.

About the photo: Women parliamentarians of the Afghan Lower House (Wolesi Jirga or “House of the People”) in Kabul, Afghanistan, January 2011. UN Photo/Eric Kanalstein