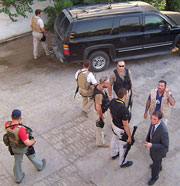 For over 30 years, the use of private military and security companies (PMSCs) has challenged law enforcement, and the United Nations’ human rights system has struggled with the impacts of mercenary and PMSC conduct for just as long. Effective oversight of PMSCs has seemed elusive, and states have been unable to agree whether an international treaty system is needed. But an agreement two weeks ago by states, civil society, and key PMSCs to set up a multistakeholder monitoring and complaints mechanism may bring effective oversight significantly closer.

In 2010, an initiative sponsored by the Swiss government created the International Code of Conduct for Private Security Providers (ICoC), a voluntary code now signed by 592 companies. Signing the code has, until now, created few consequences for PMSCs. Last year, for example, a UN panel alleged that an ICoC-signatory PMSC was involved in training deaths and possibly attacks on civilians in Somalia. Yet, no government has taken action against the PMSC concerned, and the ICoC system has had no means of exploring the allegations or sanctioning the PMSC. That is about to change.

On February 22, 2013, a multistakeholder group agreed on the charter of an international governance and oversight mechanism for the ICoC. The official version will be published around March 8. Governments involved in discussions included the US, UK, China, France, Germany, and Australia. Industry representatives came from the US, UK, Africa, Pakistan and Iraq; civil society representatives included Human Rights First, Human Rights Watch, the International Corporate Accountability Roundtable, the International Commission of Jurists, and Control PMSCs.

The oversight mechanism will be a voluntary system, jointly controlled by the industry, states, and human-rights NGOs. PMSCs will have strong incentives to join, because several key client states–notably the US and UK–are expected to participate. The UK, Switzerland, and the UN have all indicated that they will limit use of PMSCs to those that join the mechanism [read pdf for more info]. The US Department of Defense already limits its use of PMSCs to those complying with an ICoC-derived standard. In time, ICoC certification may become a market norm. Suspension of a PMSC’s ICoC membership will be, as one PMSC recently put it, “a commercial death sentence.”

ICoC certification will offer PMSCs increased legitimacy. But it will come at the price of increased accountability, through submission to the monitoring and complaints schemes.

The field-monitoring scheme is designed to focus on situations posing the greatest human-rights risk. It will operate according to established human-rights methodologies, such as those employed by UN’s Office of the High Commissioner for Human Rights. Monitors will have the freedom to access any source of information they need to. Yet, the agreed system protects both companies from the loss of legal and contractual privileges and victims from possible reprisal.

The mechanism also offers a complaints process. By signing the ICoC, PMSCs commit to provide victims “effective remedies,” a term drawn from the UN Guiding Principles on Business and Human Rights. The oversight mechanism will assist PMSCs to provide such remedies by working with the victim and the company to address shortcomings in the company’s own grievance procedure, or by referring the claim to an existing effective grievance procedure (which may include state courts), or alternatively through the development of a bespoke solution–such as mediation–tailored to the specific claim itself. The mechanism cannot impose an award, but it can reject any award that falls short of the tests of “effectiveness” set out in the UN Guiding Principles, including any award that is not “human-rights compatible.”

Only a Step Forward–Not the End

As Meg Roggensack of Human Rights First, one of the key architects of the oversight mechanism, makes clear, this is not the end of the process: “This is just the bones of a workable solution. We still have to put meat on the bones. And that’s going to take time–and effort.”

James Cockayne was a civil society representative on the steering committee that developed the oversight mechanism discussed here. Follow him on Twitter: @James_Cockayne.

About the photo: Blackwater Security at the Republican Palace in Baghdad, Iraq, December 2007.