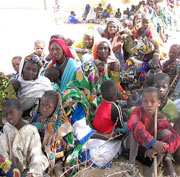 While the military intervention in January has forced Islamist militants out of the northern Malian cities of Timbuktu, Gao, and Kidal, making and building peace in northern Mali will require more than the use of force. Last month, leaders of the Economic Community of West African States (ECOWAS) called on the transitional authorities in Mali to create a comprehensive dialogue on the issues of governance that involved representatives from the different communities, elected officials, and civil society organizations. This request echoes the call made by participants in a recent high-level seminar who acknowledged both the failure of states in the region to prevent and address the complex and multifaceted crisis in the Sahel, and the importance of dealing with its root causes. To this end, the seminar called for a renewed emphasis on local governance, decentralization, and increased citizen participation, which provides a potentially useful framework to strengthen democracy and improve the socio-economic situation for the people in the region.

As with most countries in the Sahel-Sahara region, Mali is faced with severe environmental, social, and economic challenges, and its social indicators remain among the lowest in the world. In 2011, the UN Human Development Index ranked Mali at 175 out of 187 countries with a gender inequality index positioning it 143 out of 146 countries. Only 31% of young women aged 15-24 are literate; 44% of the population has access to improved drinking water sources in rural areas; and the country’s health infrastructure remains weak, a situation worsened by the conflict in the north. Mali’s development is further hampered by years of corruption, poor governance, and weak state institutions that have materialized in limited control of the national territory and porous borders, and facilitated the rooting of transnational criminal activities and various drugs, arms, and human trafficking.

For example, drug trafficking, including by some of the Islamist groups which controlled northern Mali until January 2013, is thought to have fuelled the crisis. Mali made headlines in 2009 when a Boeing 727 believed to have been carrying tons of cocaine—known as the “Air Cocaine” incident—was found burned in the desert. Moreover, the return from Libya in 2011 of close to 2,000 highly trained, heavily armed and disgruntled Tuareg mercenaries added more fuel to an already volatile situation. In its February 2013 report, the United Nations Office of Drug Control (UNODC) recalls that of the 12,000 mostly Tuareg rebel soldiers who were part of a disarmament, demobilization, and reintegration program begun in 1996, only about one third presented their weapons, which raises the fear that the stowed-away caches are fueling the widespread circulation of thousands of arms [read pdf for more info].

Countries in the Sahel-Sahara region are increasingly conscious that sustainable peace and stability requires an improvement of the populations’ living conditions. Acting on this awareness, Niger has developed a national strategy for security and development in its Sahel-Sahara areas, officially launched in October 2012. Supported by the European Union, Niger’s national strategy aims to create the necessary conditions for improved security of people and goods; strengthening the capacities of the communities and collectivities concerned in the area of good governance; improving populations’ access to basic social services and economic opportunities and youth employment; and ensuring the socio-economic reintegration of returnees from neighboring Algeria, Libya, Nigeria, and Côte d’Ivoire.

In Mali, where the central government bears the primary responsibility for the degradation of the security situation, particularly in the north, enhanced democracy and efficiency at the local level are seen even more critical tools to advance economic development; correct expensive and often politically-biased centralized service delivery; and facilitate local participation. This could be done through better implementation of the country’s decentralization policies launched in the early 90’s, which has already facilitated the emergence of a new, more credible and educated elite. This elite had taken a number of commendable initiatives in areas such as conflict prevention and management, gender promotion, and the provision of health and education services.

However, for decentralization and local governance to succeed as effective security and development frameworks, monitoring and accountability of local leaders should be ensured, which calls for citizenship education, the development and participation of a vibrant civil society, and greater legitimacy and ownership of political institutions at community level. Transversal development and dialogue as a way of governance should also be reinforced, by giving the necessary attention to the environment, local cultural specificities, and by reinforcing social cohesion while maintaining national territorial integrity.

Moreover, a renewed impetus of decentralization in the Sahel-Sahara region will not bear fruit unless the devolution of responsibilities to local communities is accompanied by adequate resources. This demands the involvement of the communities concerned in the definition of development strategies both at local and national levels. It also requires, for the central government, to make the necessary investments in economic development, security and capacity building; and equitable sharing of national wealth, especially towards less endowed communities and regions. Finally, with the transnational dimension of new security threats such as organized crime and environmental challenges, more dynamic partnerships directly among local communities should be encouraged, which will complement bi-national and regional cooperation.

As comprehensive strategies for the Sahel are being devised by a wide range of national, regional, and international actors and institutions, special attention should also be given to the views and suggestions of local leaders, as they have intimate knowledge of the crisis and tend to bear its brunt, and therefore possess valuable knowledge of how best to respond to its causes and multifaceted consequences.

About the photo: Nomads in Mopti, Mali wait in line for health care, May 2010. Photo credit: Direct Relief