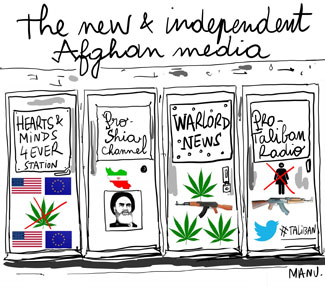 The Afghan media sector is one of the few areas lauded as a success by the international community. But, like most stories from Afghanistan, it becomes more complex once you scratch the surface. While the sector is more vibrant and professional than ever, it is built on a fractured foundation, and its growth is unsustainable.

The multiplicity of media actors has done little to bridge sociocultural divides, as many Western donors had hoped. Rather, the media sector has evolved around historic tension lines, reinforcing ethnic, linguistic and tribal differences, and creating vehicles for power brokers to deliver messages to their bases of supporters. In terms of communications strategies, Western interventions have fallen short of their desired impact because they were designed to meet donor priorities rather than the needs and preferences of target audiences.

Only a handful of radio stations existed in Afghanistan shortly after the fall of the Taliban, but by 2010, there were 175 FM radio stations, 75 television stations and an overabundance of paid programming. This explosion in the media sector was driven largely by foreign donors including the US, the European Commission, and the UK. The contributions of regional actors are not well reported, but Iran’s contributions alone are estimated to be second only to those of the United States, which has contributed $166 million to Afghan media.

For more than a decade, Western donors have been investing in media infrastructure, training, and content production (mainly TV and radio) for public outreach. For the latter, the thematic focus has been quite broad, covering such topics as health, women’s rights, the democratic process, and counternarcotics campaigns.

Regional media support is more narrow in scope. Iran’s main focus is funding Shi’a political leaders to counter Saudi Arabia’s efforts to spread Wahabism through Sunni educational media. Pakistan, on the other hand, does not fund media outlets to the same extent, but its influence is nonetheless widespread within the sector.

The agendas of media outlets–whether real or perceived–are well known among audiences. Certain channels are regarded as being anti-Kabul government (Pajhwok), controlled by Taliban (certain radio channels), or influenced by foreigners, including the United States (Tolo) and Iran (Afghan Voice Agency).

With Afghanistan’s open licensing regulations and readily available foreign backing, powerful political and religious figures and their allies have managed to gain control of many of the outlets. These “warlord channels,” as they are sometimes referred to, have given rise to fears of “increased ethnic, sectarian and factional strife being played out through the airwaves.”

The multiplicity of options has elicited a polarization among audiences, who frequently rely on ethno-linguistic loyalties to determine the credibility of media sources. Audiences who, a decade ago, had very few options, can now find channels and programs geared toward specific demographics. Audiences still tune in to other stations, notably for music shows or serials, but the influence of programming on pre-existing attitudes and opinions is limited.

There are so many options, in fact, that the supply of media outlets has outpaced demand from both audiences and advertisers. Licenses are given out so readily by the Afghan Telecommunications Regulatory Authority that Kabul recently ran out of licenses for television stations due to a lack of available frequency. Even smaller markets are oversaturated with local options; the city of Herat has 13 local radio stations, many of which are already struggling to stay afloat.

When Western financial support for media declines, the sector will likely contract, but this should be welcomed, as it is a necessary adjustment for the long-term sustainability of the sector. The inevitable competition may drive stations to be more creative, encourage more interactive programming, and shift more focus from donor to audience preferences. However, while Western support is likely to decline, regional and domestic power brokers are expected to maintain support and influence through media outlets.

To prevent media misuse and provide transparency and accountability, notably with regards to funding, national actors are working to revise media laws and strengthen regulatory bodies. The official review committee tackling this issue demonstrates cooperation between state actors and civil society; its members are representatives of the Lower House of Parliament, the Afghanistan Independent Journalists Association (AIJA), the Afghan National Journalists Union (ANJU), and the Ministry of Information and Culture (MoIC).

Meanwhile, Western-sponsored content itself has fallen short of achieving its desired impact, as it is too often designed with for-donor preferences rather than those of Afghan audiences. Lacking the language skills or cultural knowledge to understand the programming created by local implementing partners, donors rely too heavily on pre-validated scripts and messages, rather than exploring more interactive programs such as call-in programs, which are hugely popular in Afghanistan and provide an effective means of addressing local concerns and information gaps.

Moreover, excessive emphasis is placed on quantifiable outputs (e.g., airtime, audience size) and the visual components of media content, which can easily be validated by layers of bureaucracy. Combined with anecdotal evidence presented as “success stories,” outputs are used to justify funding decisions to constituencies back home. Not enough attention is paid to the outcome of broadcasts and the potential impact (or lack thereof) on audience behavior.

Foreign actors recognized the importance of media in Afghanistan early on as a tool for shaping public opinion, and along with it, the trajectory of the country. Excessive, unfocused funding has unfortunately resulted in a bloated, unsustainable sector with polarized outlets and audiences, and media content designed for public outreach has underperformed due to misguided donor strategies. Faced with the current fiscal crunch, Western donors are under pressure to deliver more with less. This could actually bode well for their media initiatives, as there is less pressure to spend quickly, allowing more time for much-needed strategic thinking.

Sarah Cramer is an independent development consultant. She previously worked in Afghanistan for a year and a half for Samuel Hall Consulting and Sayara Media and Communication.