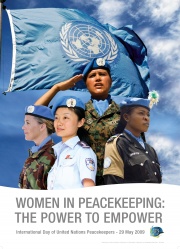 Despite support from Security Council Resolution 1325 (2000) and a UN initiative, the integration of female uniformed personnel in national contributions to UN peace operations has fallen short of expectations. In 2013, women comprise less than four percent of UN peacekeepers globally, about two percent of the United Nations’ (UN) military personnel, and about 9.8 percent of UN police.


A forthcoming study as part of the International Peace Institute’s “Providing for Peacekeeping” project concludes that the UN Secretariat and UN member states’ singular focus on increasing the numbers of women obscures the equally important twin goal of integrating a gender perspective into the work of peace operations. This is due to three core issues:

If addressed through a comprehensive strategy to fully implement the UN policy, the UN and member states’ chances of meeting its goals for gender equality in the UN peacekeeping operations would significantly improve.

Historically, women’s inclusion in peacekeeping operations has been low. Between 1957 and 1989, only 20 peacekeepers were women. 1 By 2009, with the 10th anniversary of UN Security Council Resolution 1325 on Women, Peace and Security fast approaching, the problem of low participation rates of women in UN peacekeeping was revisited. In order to address this problem more robustly, the UN launched the “Global Effort,” an initiative focused on increasing the percentage of female police serving the UN Police to 20 percent by 2014. The UN Office of Military Affairs (OMA) also began to encourage member states to deploy more female soldiers, but set no firm targets similar to the UN Police.

Still, women only comprise less than four percent of UN uniformed peacekeepers. They account for about two percent of the United Nations’ (UN) military personnel and about 9.8 percent of UN Police.

The UN Department of Peacekeeping Operations is addressing this stalled progress through studies on women’s recruitment and retention, surveys of female peacekeepers and staff, and new training initiatives for military and police peacekeepers. Some member states are undertaking new initiatives to increase the numbers of women and the integration of gender perspectives in international operations through innovative practices. Norway is promoting the candidacy of female force commanders. India and Bangladesh have pioneered all-female formed police units in peacekeeping missions. Sweden, Ireland, and South Africa, among others, have created military gender advisor positions within their national armed forces.

Nevertheless, three core barriers to advancing the UN’s goals of increased participation of female uniformed personnel and integration of gender perspectives in the daily work of peacekeeping missions remain: the lack of understanding by member states about UNSCR 1325 and the UN policy on gender equality in peace operations; the gap in data and analysis about women’s participation in national security institutions and how this relates to peacekeeping globally; and the prevalence of social norms and biases which promote gender inequality within the security sector and in UN peacekeeping missions by extension.

A comprehensive strategy that aims to fully implement the UN policy and guidelines on gender equality in peacekeeping and incorporates a gender-sensitive force generation strategy with sex-specific measures to address the recruitment, retention, and advancement of female uniformed personnel is needed. Consistent training and outreach on the UN policy about gender equality in peacekeeping to member states can directly address the lack of understanding and competency about these topics in peacekeeping missions. Further research and analysis on member state practices as this relates to women in UN peacekeeping can be undertaken and the findings disseminated widely. The few studies on the operational benefits of a gender perspective in peacekeeping that exist to-date, show that a gender perspective improves situational awareness, increases force acceptance and enhances the legitimacy of the operation. Still needed are more comprehensive field studies documenting the differences in male and female peacekeepers’ effectiveness in missions and the benefits of applying a gender perspective in the daily work of a mission.

Finally, addressing the social norms that perpetuate inequalities between men and women in the armed forces requires the constructive engagement of male political and military leadership, both within the UN and among member states. While constructive engagement of male leaders might be new to peacekeeping, it is not new to the UN. In recent years, both former Secretary-General Kofi Annan and current Secretary-General Ban Ki-moon have called for the engagement of men to promote gender equality and end violence against women, especially in the health sector. What has not be explored yet is how to engage men in promoting women’s increased participation in matters of international security—specifically in UN peacekeeping.

Increasing the participation of women in peacekeeping is not just a numbers game. It includes both increasing the number of female uniformed personnel and integrating a gender perspective in missions. This is a multifaceted process, and much remains to be done. Attention to the different experiences of men and women in conflict situations and the inclusion of female peacekeepers is vital to engendering security and peace. As Margrethe Løj, the former Special Representative of the Secretary-General and Head of the UN Mission in Liberia, remarked, “The presence of more women in peacekeeping conveys the message that peacebuilding is the responsibility of both men and women…[not] for the sake of numbers only, but for the purpose of projecting that women are also part of the society and the solution.”2

Sahana Dharmapuri is a Fellow at the Carr Center for Human Rights Policy at the Harvard Kennedy School of Government.

1 Francesco Bertolazzi, “ Women with a Blue Helmet: The Integration of Women and Gender Issues in UN Peacekeeping Missions,” UN-INSTRAW Working Paper Series (2010), 8.
2 Phone interview with Margrethe Loej, former Special Representative of the UN Secretary General and Head of the UN Mission in Liberia on 11.20.12.

About the photo: Poster for the International Day of United Nations Peacekeepers, (2009).