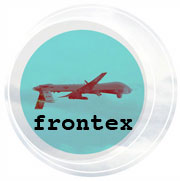 Frontex, the border management agency of the European Union, recently expressed an interest in adding drone technology to its array of surveillance tools. The potential deployment of unmanned aerial vehicles (UAVs) would expand Frontex’s surveillance operations beyond Europe, in the service of developing what the agency obliquely calls a “common pre-frontier intelligence picture.” This is an alarming goal, given already widespread and unaddressed questions about Frontex’s compliance with international and European refugee and human rights law.

Regulations and amendments have increased Frontex’s powers since its founding, including the development and deployment of rapid border intervention teams (RABITs) to intercept migrants at sea before they reach European land in order to return them to their home countries. These operations give rise to growing concerns about the legality of Frontex missions and the exploitation of legal loopholes in maritime law and European border regulations.

In 2004, a regulation by the European Council established Frontex as the “European agency for the management of operational cooperation at the external borders of the member states of the European Union.” Frontex, an abbreviation for frontières extérieures or “external borders,” is the institutional agency responsible for effecting European Union border management and security policies on the ground and at sea. Frontex has an independent board of directors, an appointed executive director, an independent budget, and is described as a community body with legal, operational, and budgetary autonomy. The depoliticized and autonomous identity allows Frontex to operate under few transparency or accountability requirements, even as its powers continue to expand.

According to the European Commission, at least 400 drones are currently under development in nineteen European states. Frontex’s executive director has asserted that UAVs could be deployed to collect surveillance data “from an area beyond the border” of Europe, further afield to international borders. In fact, EU border control already reaches beyond Europe’s outer land borders and into maritime territory toward North Africa.

Documented actions of Frontex during joint operations at sea reveal an allowance for the exploitation of law, leading to actions that seem certainly to violate the spirit (if not the precise letter) of European Community law and international law governing state action. The sea is a regulated regime in international law, and coastal nations are allowed to exercise powers including patrol and interception of the immediate coastal zone. However, states carrying out interception missions through Frontex joint operations are exploiting legal gaps around this zone in order to curb migration.

When those on board an intercepted vessel are seeking asylum or protection in a new state, and their home states have no interest in objecting to their treatment or arguing for their rights on the seas, exploitation becomes all the more possible and all the more devastating to those affected. The implications under international human rights law and international asylum law are grave, particularly if member states are knowingly violating such principles through legal loopholes utilized in Frontex operations.

RABITs are one example of the expanding powers and mandate of Frontex causing concern. RABIT missions are major deployments that occur under “emergency” circumstances, without the prior risk assessment and monitoring for which Frontex was originally created. Nevertheless, officials maintain that Frontex was (and is still) not meant to replace national border and coast guards, but should instead function as a coordination and management body.

When Frontex first designed joint operations—those involving Frontex guards and guest officers from member states—the powers of guest officers were based on national law in the host member state of each operation. The 2007 RABIT regulation established a new set of powers that could be exercised as a matter of Community law, notably including the right to carry arms and to use a weapon in Frontex operations. The right to carry arms is highly regulated because many Frontex guest officers cannot do so in their border guard positions at home, as they are not necessarily members of police or army forces.

This is a particular matter of concern for those observing the human rights compliance of Frontex and the potential for violations in its operations. As noted above, in addition to expanding the executive power and independence of border guards beyond that permitted in many member states, RABITs also raise major concerns about the rights of those seeking international protection. Various committees and NGOs have long called for Frontex to accept support from joint “asylum expert teams” that could be deployed alongside RABITs.

The principle of non-refoulement, codifed in European and international law, demands that individuals claiming refugee status not be sent back to countries where they will face persecution. The potential interception of migrants far from European borders through drone surveillance does not remove states’ obligations to protect refugees. In failing to take specific, proactive measures that safeguard those in need of protection, Frontex and participating member states undermine the right of refugees to seek asylum. Drone surveillance would compound these problems, without processes in place to determine the legal status of intercepted third-country nationals and ensure compliance with long-standing international refugee law.