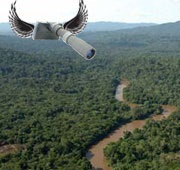 Hervé Ladsous, head of the United Nations Department of Peacekeeping Operations (DPKO), has secured Security Council agreement to authorize the use of unmanned aerial vehicles (UAVs) to support peacekeepers operating under the MONUSCO mandate in the Democratic Republic of the Congo. Mr. Ladsous’ leadership of DPKO has been characterized by his over-the-horizon planning for operations, both current and potential, and his backing of pleas to the UN from former force commanders to bring UAVs to the Congo. Agreement to his proposals to integrate UAVs into one of the most robust mandates in the DPKO’s portfolio was hard won in the face of opposition from countries such as Rwanda who were reluctant to be used as a “laboratory for foreign intelligence devices.” Deploying “eyes in the sky” will not, however, necessarily bring swift or certain gains for the mission.

On February 6, the head of DPKO, Hervé Ladsous, announced plans to deploy UAVs to support peacekeeping operations in eastern Congo (MONUSCO). The move is significant because it will be the first time that the use of UAVs have been explicitly authorized under a peacekeeping mandate; the decision was reached after much debate among United Nations Security Council (UNSC) members and last year among members of the Special Committee on Peacekeeping Operations (C-34).

The debate, both among member states and in the public arena, is overshadowed by the perceived roles and capabilities of the equipment and its global deployment by the United States against terrorist targets. The generic term “drone” is associated with America’s offensive counterterrorism measures, the far-reaching projection of US military power, extrajudicial killings, and violations of sovereignty, human rights, and moral warfare. As a result of this emotive debate, Ladsous went to great lengths to stress that UAVs deployed by the United Nations would be unarmed, and were no more lethal than “flying cameras” to be used to improve situational awareness and “exert some deterrents over all those people who move around with bad intentions in that particular area.”

MONUSCO requested the deployment of UAVs as far back as 2008, arguing that surveillance drones would provide better situation awareness for force protection purposes by alerting them to potential attacks by rebel groups, troop dispositions and movements, and provide convoy protection and route clearance. As well as force protection, the surveillance capabilities would enable information to be gathered on cross-border smuggling, trafficking, and the movement of internally displaced persons, using the standoff loiter capability of the equipment.

Surveillance drones have had success in these functions and have been tested and considered by the UN in the past, although the capability has never before been specified in the UN’s force generation analysis largely due to the limited number of member states with the assets. Some troop-contributing nations have, however, used the capability to provide force protection to their deployed contingents. The Irish Army, for example, used UAVs for route clearance as part of the EUFOR mission to Chad in 2008, the precursor to the United Nations Mission in the Central African Republic and Chad (MINURCAT), which reported to the UNSC that “unmanned aerial vehicles continued to provide valuable visibility of the area of operations [read pdf report].”

The latest decision to deploy UAVs is, however, not solely for force protection, but to support the mandate of MONUSCO by improving the mission’s ability to protect civilians. In a letter to the UNSC in December 2012, UN Secretary-General Ban Ki-moon backed the use of UAVs citing their contribution to “timely decision making.” Here, the value of their deployment is questionable, a query ironically posed by Rwanda’s President Paul Kagame when he asked in a press conference on January 22, “How are these drones going to contribute to the maintenance of peace?” The acquisition of information relating to troop dispositions may not necessarily mean an enhanced ability to fulfill MONUSCO’s mission of protecting civilians, as past failures to protect of civilians have not necessarily always come from a lack of timely information or knowledge that the event was about to or was taking place, but the limited mobility and/or reluctance of troops to act on the information (for a number of reasons ranging from imperfect information to national caveats). In order for the information to be worthwhile, troops will need to have the capacity to provide decisive responses to the information. It risks otherwise creating new expectations (particularly in terms of protection of civilians) which blue helmets will (again) not be able to meet.

Acquiring actionable information from the UAVs themselves may also not be straightforward. Imagery analysis is a skilled art, and the capability to analyze, process and produce assessments from the information gathered by the drones may not be easily acquired. The UN is planning to invite commercial companies to provide the UAVs and its Expression of Interest stipulated that the terms of the bid should include maintenance and operations staff to keep the equipment flying [read pdf report]. It did not, however, include an analysis function, which is integral to many military units that operate the same capability. The allocation of skilled imagery analysts will be all the more important given the challenging terrain of the eastern Congo. Unlike many of the sparse desert landscapes where UAVs have been successfully deployed across the world, the terrain in which the rebel groups operate in eastern Congo includes dense vegetation, dramatic variations in topography (difficult to detect in aerial imagery), and variable weather conditions. An observation attributed to Osama bin Laden in a document recently recovered in Mali containing al-Qaeda tactical operating procedures noted, “trees will give the mujahedeen the freedom to move around especially if the enemy sends spying aircrafts to the area.” The rebels in the eastern Congo will find it easy to employ this tactic in their area of operations.

The UN’s faith in technological solutions to the challenges of peacekeeping is in step with modern warfare and counterterrorism strategies which favor a stand-off solution to military engagement. Militaries and law enforcement bodies often argue that utilizing technology can provide more information with minimal risk to the collection asset or boots on the ground, particularly in the fields of intelligence collection and early warning. But not all information is best gathered from a computer screen, and in actual fact MONUSCO already has effective existing measures in place to provide early warning systems, namely through better civil-military coordination, Community Liaison Assistants (CLAs) and stretching its force into Forward and Temporary Operating Bases (FOBs/TOBs) to ensure local integration and access to “ground truth.” In addition, ground reporting from the UN’s Panel of Experts has provided extensive evidence of cross border illicit trade, routes, facilitators and operations, and it is likely that the employment of UAVs will reinforce rather than provide dramatically new information.

The recent announcement in Addis Ababa of an “intervention brigade” of approximately 2,500 soldiers with a more robust mandate than MONUSCO’s is a timely reminder that peacekeeping differs from war fighting. While the announcement of the troops along with a framework for peace was welcomed by the UN Secretary-General and regional representatives, forty six Congolese and international NGOs released a statement underscoring the need for military operations to be matched with political will.

There are still many unanswered questions about the deployment of UAVs in eastern Congo, not least those posed by the UNSC members opposed to the use of surveillance drones in the region; what will the information be used for, and where will it go? Is it for the use of real-time tactical support to ground operations, or for more strategic, long term information gathering in support of units such as the the mission’s Joint Mission Analysis Centre (JMAC)?

Mr. Ladsous said at an International Peace Institute event on February 19 that the nature of peacekeeping operations is changing from a monitoring role in the context of ceasefires and peacebuilding, to one where missions are increasingly deployed into high-risk environments, creating a need to be adaptive and creative in support of their mandates. His eye is rightly on the future of peacekeeping operations, but it remains to be seen if unmanned aerial vehicles will provide that vision. As Mr. Ladsous himself concluded, “The proof of the pudding will be in the eating.”

Fiona Blyth is a former military intelligence officer with the British Army who is interning in the Africa program at the International Peace Institute.