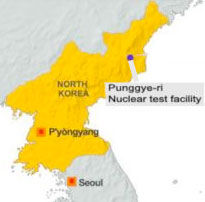 North Korea’s third nuclear test on February 12, 2013 comes in the wake of a successful “weather observation” satellite launch and in defiance of recently reinforced UN sanctions. This missile-nuke combo, as dangerous as it is, should not come as a surprise; it is an exact replay of what happened in 2006 and 2009. In July 2006, North Korea tested two rounds of missiles, and in October, after Security Council condemnation, tested its first nuclear device. In April 2009, North Korea launched another missile, and by the end of April, again after widespread condemnation, conducted their second nuclear test. Soon after both occasions, they were offering to talk and scrap the whole program.

The routine is losing its ability to shock and awe. Yet, there are some pressing questions we should ask. First, now that the UN is running out of options in terms of what new sanctions it can impose, what is left for the Security Council to do? Second, as the North slowly reaches the tipping point where testing nuclear weapons is no longer believable as a threat, what will its next big daredevil trick be; that is, how will it continue to raise the stakes without ever risking a real confrontation?

The trepidation around this last nuclear test arises from the fact that the bomb is sufficiently “miniaturized” to fit on the recently launched Unha-3 rocket. James Acton of the Washington-based Carnegie Endowment for International Peace figures that “it is likely that Pyongyang’s goal is to develop a warhead that is small and light enough to be mounted on a missile, since this would enhance its ability to threaten South Korea, Japan, and eventually the United States. Indeed, its successful satellite launch in December 2012 using intercontinental ballistic missile technology was a significant stride toward this goal.

Observers this year have worked out that North Korea could soon deliver a warhead as far as the East Coast of the United States. In 2006, it was Alaska; in 2009, it was the West Coast–it is unclear what targets will be threatened in the next round. But the point has never been that North Korea was going to level Anchorage, or San Francisco, or even New York, but that it is seen as gaining the ability to do so. Gaining, but never quite completing; to this day, experts disagree on the North’s actual capacities. Ergo, the endless slow-motion parade of missile and nuclear testing.

As George Friedman, a geopolitical analyst, said: “On the surface, threatening to test weapons does not appear particularly sensible. If the test fails, you look weak. If it succeeds, you look dangerous without actually having a deliverable weapon… Developing a weapon in absolute secret would seem to make more sense. When the weapon is ready, you display it, and you have something solid to threaten enemies with.” In addition, experts point out that there is no practical need to test a nuclear weapon, the reason being that nowadays, most countries rely on computerized simulations to achieve the same results. Clearly, for North Korea, testing is for the sake of testing.

In an upcoming IPI paper, I map out the history of these tests within the context of competing regional interests. The report concludes that the North’s snail-pace proliferation strategy has delivered formidable results not only for the North Koreans (guaranteeing survival and participation), but also for some of the larger regional players who have opted for “second best” solutions to the problem. For China, for example, a nuclear North Korea grants it big-brother status, as everyone turns to them for mediation. For the US, it helps justify a continued military presence in South Korea and Japan.

While The Economist argues that “the North Korean regime appears to be regularly underestimating the strength of international feeling against its nuclear program,” a deeper look forces us to observe that the North knows all too well what the international community’s reaction is going to be. How else can you explain 30 years of flagrant, practically unchecked proliferation?

What is left for the Security Council to do? The Council is looking more and more toothless, which will undermine its credibility with other countries like Iran. But, more importantly, the Security Council needs to find new, post-sanctions ways to continue playing its vital role as a moral bastion. The existing equilibrium in northeast Asia has given rise to a fundamental dilemma. On a strategic level, both China and the US need North Korea to stay the same, but on a normative level, their ideologies are in contradiction with the North’s shenanigans. So far the dilemma has been solved quite easily: strategic trumps normative, while the moral haranguing was left to the Security Council.

There is no indication that the Security Council has any intention of finding new ways to harangue North Korea. Therefore, as the UN slowly loses credibility by offering more and more of the same, the pressure rises on both China and the US to find a different solution to the dilemma. The two powers are actually brought closer together by the fact that they share this future problem.

What will North Korea’s next daredevil trick be? History tells us that whenever the proliferation narrative gets old, the North resorts to its second favorite trick: picking on South Korea. In this regard, it is essential that we ask the question: what is new in the intra-Korean landscape? Here, we have food for thought. South Korea’s recently elected “dictator’s daughter” Park Geun-hye is undoubtedly a mother-like figure. North Korea’s recently nominated dictator’s son Kim Jong-un is undoubtedly a child-like figure.

This mother-and-child arrangement might not mean anything to hardened security experts; nevertheless, it has the potential to mold and shape those underlying psychological currents that, in the end, move the masses and have the makings of future legends. It is not unlikely that some kind of charged exchange will soon start between the two. Few things may be more riveting than watching a symbolic mother and son going back and forth between olive branches and war hatchets.

Obviously, this will not have any direct impact on the problems considered here, but it will affect the way the two governments posture themselves, especially in relation to the open wound of reunification. After all, for how long do we expect to talk about the future of nuclear weapons in Korea without rejoining it to the primary problem of a divided Korea.