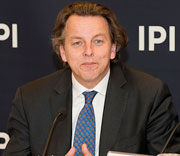 “We are in a time now where there is regional insecurity in Mali, and it is, in my view, important for Côte d’Ivoire to export stability rather than import instability,” said Bert Koenders, SRSG for Côte d’Ivoire and Head of UNOCI.

“We’re living in an area and a country which is still volatile,” he said, referring to the violence and unrest in Côte d’Ivoire during the 2011 election crisis.

Mr. Koenders also discussed the UN’s support of the Commission on Dialogue, Truth, and Reconciliation, which was set up in 2011 by President Ouattara. He said it is crucial that people “feel free to talk, that people feel free to do their testimonies, that they feel secure enough to do so, and that, if there are witnesses for certain things, they feel protected.”

Mr. Koenders had some good news about economic progress in the country, which has growth rates of 8.5%, after negative growth during the crisis.

When asked about the Ivorian public’s perception of the UN, Mr. Koenders said, “We’re there obviously to accompany the government in this whole process, but from a point of view to assist in bridging all political rivalries, and I think the UN is gaining confidence among the people every day.”

The interview was conducted by Warren Hoge,  IPI Senior Adviser for External Relations.

Warren Hoge : Albert Gerard Koenders, known as Bert Koenders, has been the SRSG and head of the UN Operations in Côte d’Ivoire, known as UNOCI, since August of 2011. He is a seasoned international policy maker on development, humanitarian and governance issues, and has also been the Dutch Minister for Development Cooperation with experience in a number of countries in conflict or emerging from it.

Côte d’Ivoire, once West Africa’s most prosperous society, was sundered by a civil war a decade ago that left it divided north and south and then again in 2010 and 2011 by post-electoral violence in which 3,000 people were killed and some 700,000 were forced to flee their homes.

The United Nations played a supporting role in the transition that eventually saw former president Laurent Gbagbo step down and make way for the winner, who is now president, Alassane Ouattara. President Ouattara came to IPI in September 2011, four months after taking office, and he told an overflow audience here that the main issue that we’re addressing is reconciliation. So Bert Koenders, how is UNOCI participating in that effort, and let me ask you specifically about DDR?

Bert Koenders : I think what President Ouattara said in your meeting here in New York is probably the most crucial element of our work in Côte d’Ivoire—that is, assisting the process of national reconciliation. And the second part of your question is related to DDR and SSR. And if you look to DDR and SSR, you’re basically talking about forming an integrated army with confidence inside the army and between the army and the population, and you talk about confidence between the security forces themselves. To build that, you need also reconciliation—they are interrelated. Without reconciliation, it’s more difficult to do the DDR, SSR, and if you don’t start with basically saying to people give up your weapons and find another job and be part of society and build Côte d’Ivoire, it’s very difficult to work on reconciliation.

For us, actually, in this year 2013, these are the two priorities where we assist the government of Côte d’Ivoire, on these two challenges. They are challenges because Côte d’Ivoire comes out of a long period of crisis, a period of no peace and no war, ending in a post-electoral crisis. So we do that through the work, for instance, in the supporting of the national reconciliation commission. We have decentralized our mission so we work on conflict prevention and supporting reconciliation in the west and other areas. We assist in helping the justice system so that the whole process—and, of course, political dialogue, we shouldn’t forget that my good offices of the special representatives are also to assist the Ivorians in finding each other and that might help also the DDR and SSR process.

WH : There’ve been at least two very troublesome episodes in Côte d’Ivoire over the past months, one of them which was an attack on soldiers and police, killed more than 20 people this past summer, and the other was the killing of UN peacekeepers, 7 of them who were ambushed and killed near the Liberian border. My question is, do we know or do we suspect that the people behind these attacks might be Gbagbo supporters who were trying to destabilize Côte d’Ivoire? Might they further be people who are related to the people who are destabilizing countries like Mali and even to al-Qaeda?

BK : Well, let me start by giving you a general answer and then go to the specifics. I think we have to be vigilant in all the areas you just mentioned. We’re living in an area and a country which is still volatile—look at the situation in Mali right now. With reconciliation, as long as it’s not completely ending in a sort of positive process of accomplishments, there’re also always risks of people who are related to the opposition to do attacks or try to destabilize the country. So yes, we are very vigilant as peacekeeping operations. It’s not for me easy to say who did all these attacks—there are investigations—I think that’s first of all very crucial that these investigations are ending, are being done thoroughly and that those people that are responsible for these attacks are put before a judge.

Let me give you the example of the 7 peacekeepers. For a mission, obviously, that is a large tragedy for the families of these 7 peacekeepers, also of a battalion from Niger, a neighboring country, that contribute to peace and reconciliation in the country, they were actually on a mission in the other Liberian border to assist the protection of civilians. And now it is important that our suspects of these attacks in Liberia and Côte d’Ivoire and it is important that these people become a trial and we have to remain vigilant of different groups that might want to destabilize. That’s why I use the word “vigilant.” We have progressed in the last period in terms of peace and security but as you see, like during last summer, there’s still a vulnerability also of the country, and that’s also a reason why we’re there.

WH : You spoke a moment ago about reconciliation and specifically trying to reintegrate people from two armies, one in the north, one in the south, who were actually shooting at each other at one point but now they are part of the same force. In the political arena, how is political dialogue going now in Côte d’Ivoire? I know you had one election, there’s another one coming up. But do politicians now speak to each other—in what the president said when he was here fifteen months ago—the language of reconciliation?

BK : President Ouattara, during his state visit in Germany which just ended yesterday, basically said it’s important to extend the period of delay of the elections for a few weeks to ensure that they are as inclusive as possible. Prime Minister Duncan has taken the initiative to discuss in a forum with the opposition how to make these elections more inclusive —has to do with party financing, how to make up the composition of the independent electoral commission—basically the sort of regime that creates free and transparent elections. The dialogue is going on as we speak, including with the former President Gbagbo’s party, the FPI. I think it’s very important that they are successful. We are in a time now where there is regional insecurity in Mali, and it is in my view important for Côte d’Ivoire to export stability rather than import instability. And these kinds of political negotiations for the most inclusive elections possible are therefore, in my view, a priority.

WH : Tell me about the Truth and Reconciliation Commission, which I know has been created. Is this a public commission the way it was, for instance, in South Africa where it drew an awful lot of attention? Is it a commission which is trying to breed reconciliation among the population, watching people try to talk about the past and how they can reconcile?

BK : Thank you for that very important question. The Commission on Dialogue, Truth, and Reconciliation was set up in 2011 already by President Ouattara a few months after the post-electoral crisis. It’s led by the former Prime Minister, Mr. Banny. We support them as United Nations—we’re not the only ones. The crucial point here is that they talk to the people, that people feel free to talk, that people feel free to do their testimonies, that they feel secure enough to do so, and that if there are witnesses for certain things, they feel protected. That is the big challenge right now. They have local committees to go and do this, and I think that process has to be reinforced.

WH : President Ouattara is a former director of the IMF, and obviously restoring the economy, which was one the most prosperous in of all of West Africa, is important. How is that going?

BK: We have seen in the last year major economic progress in terms of the growth rates, at 8.5%, after a negative growth rate obviously during the crisis. The important thing is now to sustain that growth level and to ensure that jobs are created, that people see in catalytic terms a change in their lives. President Ouattara is a very famous economist, he has a made a national development plan. He’s disciplined his ministers to carry it out. We went with the UN and many others to Paris to go to a consultative group meeting with the international partners, and he got twice as much money as they wanted. So that’s a positive sign also of trust, that this government needs also money to reform—to reform in terms of infrastructure, technology, in terms of agricultural transformation, but also in terms of social equity. The poverty rates have gone up in the last decade, up to over 50%. Some of the Millennium Development Goals are far from being in sight, so there’s also a very social need to have equitable growth in the country.

WH: I finally want to ask you about the role and the image of the United Nations—of UNOCI—in Côte d’Ivoire. The UN was involved, I think, rather dramatically in the transition. I don’t think it took sides, the side it took was supporting democracy, which is not taking sides, that’s being impartial in the right way. And I wondered if that perception means that the Ivorian public is supportive of the UN, or are they suspicious of the UN?

BK: It’s a highly politicized society. Part of the reconciliation in the country is actually to assist this process of accommodating different sides. The UN, as you said correctly, I think, played an important, contributing role to ensure the implementation of the outcome of the elections last year. It’s been also my work as special representative in the last year to ensure that we’re there for all Ivorians, without discrimination, without exclusion. We’re also talking to all the political and ethno-political groups. I think that’s crucial for the United Nations. We’re there obviously to accompany the government in this whole process, but from a point of view to assist in bridging all political rivalries and I think the UN is gaining confidence among the people every day.

WH: Bert Koenders, thank you very much for talking to us in the Global Observatory.

BK: Thank you very much. It was a great pleasure to be with you and being with International Peace Institute, and I hope to be back.