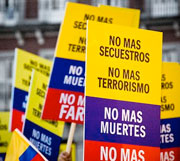 After a series of delays, representatives from the Colombian government and the leftist guerrilla group the Revolutionary Armed Forces of Colombia (FARC) will meet in Oslo this week, hoping to negotiate an end to the longest-running conflict in the Western Hemisphere. While recent opinion polls show 75 percent popular support for the talks, and a wide sector of politicians and opinion makers have closed ranks to support the initiative of President Juan Manuel Santos, the country has not forgotten the costs of the failed negotiations initiated by President Andrés Pastrana in 1999, and it is well aware of the risks and difficulties that lie ahead.

The following are some of the key issues that will determine how successful this effort might be:

1.   Good timing: As opposed to the last negotiation process, there seems to be a consensus that the political situation is ripe for a peace process. The FARC have been significantly weakened by the military attacks initiated during the government of Álvaro Uribe and have given clear signs that they are taking this process seriously, such as liberating all captives with political value. Santos, on the other hand, is betting that a successful negotiation with the FARC will guarantee his reelection and a place in history.

2.    Engaging the spoilers: Both the government and the FARC have chosen representatives from the hard-line sectors on their negotiation teams. This is an effort to neutralize spoilers early on and force actors such as the military and business owners to be committed to the process. However, there are no women on either team, and it is unclear how input from civil society will be channeled into the negotiations. In particular, the voices of the victims of violence and those in the regions most affected by conflict must be heard early on if the Colombian people are to feel any ownership over the process.

3.    The agenda: As opposed to the dialogues of 1999, the negotiation agenda does not include extensive reform proposals to be agreed upon. Rather, there is a clear focus on demobilization as the end goal. This certainly makes the agenda more manageable and avoids giving the impression that the FARC, a guerrilla group with very little popular support, would be given a protagonist role in deciding national issues, while more legitimate actors would be left out. The pre-agreement signed by the two parties, however, does include two extremely thorny issues:

4.    The future of the FARC: The political future of the FARC is a central question of the peace process. Recent polls show that 72 percent of Colombians oppose allowing the FARC’s leadership to participate in politics or be elected to office. This openly contradicts one of the five points of the dialogue agenda, which reflects the FARC’s interest in becoming a political movement. It is unlikely that the guerrilla army would ever agree to demobilize if they are not guaranteed a space in electoral politics, as that would mean a renunciation of any possibility of political power acquired after four decades of war. At the same time, it also seems unlikely that Colombians would elect a member of the FARC leadership to national office. The likely scenario, then, is that the FARC would take advantage of the Marcha Patriótica— the leftist political movement led by ex-Senator Piedad Cordoba— to transition into civilian life, and they would try to consolidate power in those mostly rural areas where they have some support from the community.

This path could face at least two obstacles: first, the Colombian state faces difficult questions balancing its desire to achieve peace with its obligations to comply with the imperatives of justice imposed by the Rome Statute and other international agreements. Experts agree that most members of the FARC have violated international humanitarian law, and should (by international legal standards) face the courts. The International Criminal Court will, no doubt, be following the peace negotiations closely, and while the agreement will have to be generous enough to entice the FARC to leave arms, it will have to comply with the justice standards if Colombia doesn’t want to face an intervention from this court.

Second, the state will have to guarantee the safety of those who demobilize and decide to participate in politics. The murder of over 1,500 members of the Patriotic Union—the political party created by members of the FARC in the 1980s—is a ghost that will weigh heavily over the negotiations.

Would the demobilization of the FARC bring peace to Colombia? This is the looming question, and, regrettably, the answer is: probably not. The active engagement in violence from some of the demobilized paramilitary (now called BANCRIM); the likelihood that there will be split factions of the FARC that will decide to continue their engagement with drug trafficking; and the weakness of the institutional apparatus that allows for violence to be a tool to consolidate local power–among other factors–indicate that, even without the FARC, violence will continue to be a variable in Colombia’s daily life. That said, a negotiated end to the conflict will no doubt contribute significantly to the long-term goal of peace in the country, and the international community should support Colombia’s efforts in every possible way.

Renata Segura is Associate Director of the Conflict Prevention and Peace Forum at the Social Science Research Council.

About the photo: Protester signs against FARC, 2008.