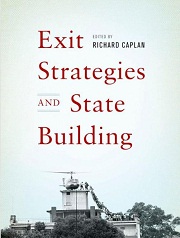 Much analysis has been devoted to states and international efforts to stabilize peace and rebuild societies in the aftermath of conflict. However, surprisingly little attention has been paid to the “end game” of these operations. When should a mission be scaled down or closed? What are the criteria for successful disengagement from a post-conflict society? These are questions that bear great policy relevance, but have not generated much enthusiasm in the academic community. A new excellent book, Exit Strategies and State Building, edited by Professor Richard Caplan at Oxford University, is filling this gap.

The volume, which contains case studies covering the exit challenges in operations from the colonial time to the recent Iraq case, is worth reading in its entirety. After all, the best way to strengthen our knowledge in this field is to learn from specific cases. For those short of time, but still interested in the topic, here are a few general conclusions, as summarized in the volume’s concluding chapter.

1. Exit is a process, not an event. “Exit as a process” is not just a slogan, but has policy implications. First of all, it means that exit is linked to entry. A roadmap to exit cannot be fixed at the beginning of an intervention. However, the strategy and modalities of engagement in a country determines to some extent the transition phases. Effective planning requires continuing reassessment of goals and progress, calling for greater flexibility. The orientation should be toward “end states,” rather than “end dates.“

2. Exit means transition. A second policy implication of exit as process is the likeliness of exit occurring in phases, with different actors withdrawing or passing responsibilities at different times. This means that rather than just talking about exit, one should talk of transition, moving from one operation to another, or transferring responsibility from international actors to national authorities. The end of an operation rarely marks the end of all international involvement, as we have seen in the Balkans and in West Africa. Well-managed transitions require targeted follow-on activities to reinforce peace- and statebuilding measures (e.g., continuing troop presence in certain hot spots) and stronger collaboration among the multiple players who generally operate in a post-conflict country.

3. Exit linked to progress. There is no “hard” indicator to measure a consolidated peace, at least in the short term. For this reason, all conversations about “benchmarks” linked to exit appear to be more theoretical than practical, especially when they are based on outputs (e.g., the number of police officers trained) rather than outcomes (e.g., police performance). However, assessments of progress toward a consolidated peace should be carried out periodically. Many studies, including this volume, suggest three interconnected sets of requirements: (1) establishment and maintenance of basic physical security; (2) presence of effective and legitimate institutions and rule of law; and (3) conditions for basic economic and social development, including well-managed natural resources. It goes without saying that these indicators call for long-term engagements, as well as integrated approaches that bring together efforts in security, economics, and governance. Yet, this is another indication that exit has to happen in stages and through carefully orchestrated transitions.

4. Exit is political. Since peacebuilding and statebuilding are fundamentally political processes, the timing and the nature of exit strategies are inevitably influenced by political factors, which often have little to do with the progress on the ground. To cite a few examples from the volume, in both Timor Leste and Iraq, the growing impatience of the international community resulted in premature withdrawal of forces; in Sierra Leone, budgetary pressures played a decisive role in determining Nigeria’s timeline for exit; and so on. Notwithstanding these inevitable political determinants, the question is whether there are points of contact between the realities on the ground and the international factors, and how local authorities can be better prepared to take over when the moment of exit has to come.

Francesco Mancini is the Senior Director of Research at the International Peace Institute.