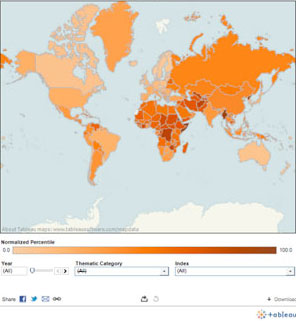 Access the updated 2016 version of the Catalogue of Indices here.

The use of indices to measure changes in countries across different policy areas is becoming increasingly frequent. From human rights to conflict, from governance to gender, many organizations have invested in developing statistical models that derive data from multiple sources and rank countries according to their score.

The IPI’s Global Observatory provides the first list of country indices available in open-sources. It reviews thirty indices and provides a description of the methodology and results.

In addition, the Global Observatory has prepared an interactive world map (beta version) that shows data from all thirty different indices. Users can also see results from combined indices  in different thematic categories.

The indices are organized in six categories:

Indices add to the world’s knowledge and provide an easy read into trends and changes that would require otherwise the analysis of a large amount of data. At the same time, indices are difficult to construct, and have little comparative power. They tend to give “black and white” pictures of countries, and some of the criteria can be quite subjective. Policy prescriptions cannot be devised on the basis of a numerical score.

By The Fund for Peace

Description: The 2012 Failed State Index measures risk for instability or risk of violence in 177 states. The Failed State Index is accompanied on Foreign Policy by a map with country rankings and a photo essay series entitled “Postcards From Hell.”
Issued: Annually since 2005.
Methodology: The Fund for Peace uses its Conflict Assessment System Tool (CAST) software which scans open-source articles and reports using Boolean logic, which consists of key phrases designed to capture the twelve indicators and a number of sub-indicators covering social economic, political, and military facets of state fragility (which is reviewed through human analysis). For more on methodology, click here.

By Institute for Economics and Peace

Description: The 2012 Global Peace Index measures peace as the “absence of violence” and seeks to determine what cultural attributes and institutions are associated with states of peace in 158 states. The Global Peace Index is accompanied by a yearly report.
Issued: Annually since 2006.
Methodology: The Global Peace Index  uses 23 qualitative and quantitative indicators, ranging from a nation’s level of military expenditure to its relations with neighboring countries and the percentage of prison population. For more on methodology, click here.

By University of Maryland

By The Economist Intelligence Unit

Description: The 2010 Political Instability Index assesses 165 countries on how susceptible they are to social unrest.
Issued: in 2010, using a 2007 baseline.
Methodology: The Political Instability Index is based on four factors: (1) the level of development as measured by the infant mortality rate; (2) extreme cases of economic or political discrimination against minorities (according to assessments and codings by the Minorities at Risk Project); (3)”a bad neighborhood” (if a country has at least four neighbors that suffered violent conflicts) and; (4) regime type (intermediate regimes that are neither consolidated democracies nor autocratic regimes combined with the existence in these regimes of intense factionalism in domestic politics, as coded by the Polity Project on democracy). There are 15 indicators in all—12 for the underlying and 3 for the economic distress index. For more on methodology, click here.

By Carleton University, The Norman Paterson School of International Affairs

Freedom in the World Index

By Reporters without Borders

Description: The 2012 Worldwide Press Freedom Index measures the state of media freedom in 179 countries to reflect the degree of freedom that citizens, journalists, and news media enjoy in each country. The Worldwide Press Freedom Index is featured in the annual Press Freedom Index Report.
Issued: Annually since 2002.
Methodology: Based on a questionnaire sent to partner organizations and 130 correspondents (18 freedom of expression groups in all five continents), and to journalists, researchers, jurists, and human rights activists based on 44 criteria related to press freedom. For more on the methodology, click here.

Description: CIRI measures governments’ overall level of respect for human rights in a particular year in 195 countries. CIRI does not measure overall human rights conditions (which may be affected by non-state actors).
Issued: Annually from 1981 to 2010.
Methodology: CIRI measures a range of rights, including physical integrity rights (such as the right not to be tortured, summarily executed, disappeared, or imprisoned for political beliefs); civil liberties (such as free speech, freedom of association and assembly, freedom of movement); workers’ rights; and rights of women to equal treatment politically, economically, and socially.

Economic Freedom in the World Index


By The Fraser Institute

Description: The Economic Freedom in the World Index measures the degree to which the policies and institutions of 144 countries are supportive of economic freedom. Economic freedom includes personal choice, voluntary exchange, freedom to compete, and security of privately-owned property. The index is featured in the annual Economic Freedom in the World Annual Report.
Issued: Annually since 1997.
Methodology: The Economic Freedom in the World Index is based on forty-two data points used to construct a summary index to measure the degree of freedom based on five broad areas: (1) size of government: expenditures, taxes, and enterprises; (2) legal structure and security of property rights; (3) access to sound money; (4) freedom to trade internationally (5) regulations of credit, labor, and business.


By The Heritage Foundation and The Wall Street Journal


By The World Economic Forum


By The Economist Intelligence Unit

The World Bank Governance Indicators
Description: This index by the World Bank measures the level of governance in 200 countries–governance meaning the process by which governments are selected, monitored and replaced; the capacity of the government to effectively formulate and implement sound policies; and the respect of citizens and the state for the institutions that govern economic and social interactions among them.
Issued: Annually since 1996.
Methodology: The aggregate indicators combine the views of a large number of enterprise, citizen and expert survey respondents in industrial and developing countries. The index consists of six composite indicators of broad dimensions of governance: (1) Voice and Accountability; (2) Political Stability and Absence of Violence; (3) Government Effectiveness; (4)Regulatory Quality; (5) Rule of Law; (6) Control of Corruption. Countries are given a percentile rank on each governance indicator indicating the percentage of countries that rank below the selected country. For more on methodology, click here.

Description: The Bertelsmann Transformation Index examinesanalyzes quality of democracy and the market economy (Status Index) and political management in 128 developing and transition countries (Management) Index. Analysis of the Bertelsmann Transformation Index is included in country reports.
Issued: Biennially since 2001.
Methodology: The Bertelsmann Transfomation Index uses two out of forty-nine questions from the country assessments, which employ one primary researcher per country, one peer reviewer and two calibration rounds by regional and global coordinators. The BTI publishes two rankings, the Status Index and the Management Index, both of which are based on in-depth assessments. For more on methodology, click here.


Gallup Global Wellbeing (thriving) Index
By: Gallup
(This Index is updated continuously and does not rank countries.)
Description: The Gallup Global Wellbeing Index measures life satisfaction at the country level in over 150 countries.
Issued: Gallup surveys have been regularly updated since 2006.
Methodology: The Gallup Global Wellbeing Index is based on telephone and face-to-face interviews in which interviewers were asked questions related to their wellbeing (feeling well-rested, being treated with respect, smiling/laughter, learning/interest, enjoyment, physical pain, worry, sadness, stress, and anger) on a scale from 0-10. For more on methodology, click here.


By The United Nations Development Programme

Description: The 2011 Human Development Index measures progress since 1980 in the three basic dimensions: health (life expectancy at birth), knowledge (mean years of schooling) and income (GNI per capita) in 187 countries. The index is intended to assess development beyond just economic growth by looking also at the people and their capabilities. HDI is featured in the annual Human Development Report.
Issued: Annually since 1990.
Methodology: HDI measures development by combining indicators of life expectancy, educational attainment and income into a composite index. For more on the methodology, click here.


By World Bank International Bank for Reconstruction and Development

Impunity Index on the Murder of Journalists


By The Committee to Protect Journalists

Description: The Impunity Index on the Murder of Journalists identifies countries where journalists are murdered regularly, and where governments fail to solve the crimes. Impunity for threats and harassment/ killing of journalist is seen as a key indicator of press freedom and freedom of expression.
Issued: First issued in 2011, covering previous ten years.
Methodology: The Impunity Index on the Murder of Journalists identifies the number of unsolved journalist murders as a percentage of each country’s population. Only the thirteen nations with five or more unsolved cases are included in this index. Cases are considered unsolved when no convictions have been obtained. For more about the methodology, click here.


By The World Bank

Description: CPIA/ IDA Resource Allocation Index assesses developing countries’ policies to reduce poverty, promote sustainable growth, and effectively use development assistance to help guide the allocation of IDA lending resources.
Issued: Annually since 2005.
Methodology: The CPIA/ IDA Resource Allocation Index is based on the results of the CPIA, which are grouped into four clusters: (1) economic management; (2) structural policies; (3) policies for social inclusion and equity; and (4) public sector management institutions. In each, countries are rated from 1 (low)-6 (high). Ratings are made by expert survey conducted by UN staff reflecting a variety of indicators, observations and judgments. For more on methodology, click here.