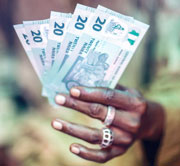 Since the 2012 rainy season began in July, Niger has experienced its worst flooding in eighty years, affecting over 500,000 people. Niger, one of the poorest countries in the world, desperately needs international aid to help flood victims. But on September 8, 2012, Interior Minister Abdou Labo announced that some aid had been stolen.

This tragedy is yet another challenge for the new government, which has worked to promote transparency and unearth foul play. Authorities have created a hotline to report corruption and established a national anti-corruption body with representation from government, civil society, and private sector. But the fight has not gone smoothly. In July 2011, three months after President Mahamadou Issoufou took office, soldiers angry at firings and probes connected to the anti-corruption campaign plotted to assassinate him. In January of this year, arsonists targeted the Ministry of Justice, destroying key files used in the investigations. Critics even charge that members of the president’s own entourage “have hastened to fill their pockets before packing up.”

Corruption is a problem across the Sahel. Out of 182 countries profiled in Transparency International’s 2011 Corruption Perceptions Index, Sahelian nations occupied some of the worst spots. On a list where the number one country, New Zealand, was the least corrupt, Sahelian countries ranked 100 (Burkina Faso), 112 (Senegal), 118 (Mali), 134 (Eritrea and Niger, tied), 143 (Mauritania and Nigeria, tied), 168 (Chad), and 177 (Sudan).

The problems caused by corruption are legion. Corruption among top politicians and officials drains millions of dollars from public treasuries. When Nigerian dictator General Sani Abacha died in 1998, for example, the Washington Post described his regime’s pervasive corruption in these terms:

While he ruled Nigeria from a fortified presidential villa in Nigeria’s capital… he and a circle of aides and business partners tapped virtually every stage of the oil business, Nigeria’s most important industry and the source of 80 percent of its government revenue. They took kickbacks from foreign companies for licenses to search for oil in the basin and delta of the Niger River and offshore. They got bribes from construction firms that won contracts to build drilling rigs and pipelines.

According to Forbes, Abacha likely amassed over $1 billion in personal wealth. Although corruption at the top is rarely as dramatic as it was under Abacha, numerous Sahelian leaders have been accused of stealing public money or profiting from public projects.

At the same time that corruption deprives ordinary people of needed infrastructure and services, perceptions of corruption weaken people’s faith in their governments. Endemic corruption can hollow out a regime from the inside, weakening its institutions and tarnishing its legitimacy. Mali’s former President Amadou Toumani Touré—though hailed internationally as a democrat, reformer, and ally in the American “war on terror” —oversaw a system tainted by corruption at all levels. When dissatisfied soldiers staged a mutiny-turned-coup, Touré fell quickly, and some Malians applauded. As Dr. Bruce Whitehouse writes, “The putschists capitalised on the popular disappointment with bogus democracy and weak government, using it to justify their actions.”

Corruption does not only exist at the top. Even as ordinary people shake their heads at rumors of corruption among presidents and ministers, their day-to-day experiences of corruption often come at the hands of policemen and minor officials. A 2006 USAID report on corruption in Senegal (.pdf) noted reports of corruption throughout the judiciary, including by criminal police investigators, prosecutors, and judges. Even law clerks, the report said (p. 24), sometimes “simply lose or hide files or they only produce the minutes of the court’s decision in exchange for a payment.” Low-level corruption can turn traffic stops into extortion demands, office visits into cash transactions, and hospital waiting rooms into auction halls where those who pay the most get the best and fastest care. In Nigeria, financial malfeasance is so common that people speak of a “culture of corruption.”

Some Sahelian countries have made serious anti-corruption efforts. As the case of Niger shows, though, leaders who target illegality face powerful foes. And as the case of Senegal shows, corruption probes can turn into political controversies. After taking office in April 2012, Senegal’s new President Macky Sall launched investigations into alleged corruption under his predecessor, President Abdoulaye Wade, summoning former ministers for questioning and confiscating vehicles said to be government property. In the campaigning before legislative elections in July, Wade’s party accused Sall of using the issue of corruption for political gain. Sall’s party won the elections, suggesting that many Senegalese support his efforts, but the campaign controversy shows how intimately linked corruption and politics can be.

The Sahel’s problems with corruption are not entirely unique. But in a region of fragile governments and powerful, violent non-state actors, corruption can fuel conflict and illegal activity. In Chad, oil wealth meant for development instead went to arms purchases so that the government could hold rebels at bay; only after Chad’s rapprochement with its neighbor and sometime rival Sudan in 2010 did attention turn seriously to infrastructure, and much of the spending has been concentrated in the capital. Even now one observer reports that the change is “superficial” in the lives of ordinary people.

Government corruption has also contributed to the problem of drug trafficking in the Sahel. In recent years, West Africa has increasingly become a transit point for illegal drugs. Mali in particular has seen a rise in drug trafficking. The Institute for Security Studies’ Abdelkader Abderrahmane writes, “Traffickers and terrorists have chosen Mali largely due to the serious lack of surveillance, the porous borders of the country, and the high level of corruption in all strata of the army, police and customs.”

From stolen flood relief funds in Niger to the complicity of local government officials in Mali’s drug trade, corruption is a major problem in the Sahel. The success of anti-corruption efforts across the region would do much to restore popular faith in government and return needed funds to development projects. The failure of these efforts, however, would exacerbate the region’s instability.

Alex Thurston is a Ph.D. candidate in the Religion Department at Northwestern University. He edits the Sahel Blog.