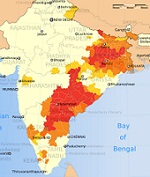 In 2009, Indian Prime Minister Manmohan Singh declared, “Left-wing extremism poses the gravest internal security threat to India.” He was right. India’s long-running Maoist insurgency has developed into one of the country’s most serious security challenge of the past 50 years. Starting as a local political group in the 1960s, the Maoists are now a formidable wider movement with vastly improved military capability, an effective chain of command, and brutal and repressive personnel known to commit abuses and atrocities.  Data from the Indian Home Ministry shows that this once near moribund struggle has resurrected itself and has now spread to 182 out of a total of 593 districts in India. Since 2008, over 3000 people have been killed due to this conflict. After decades of Maoist insurgency and unrest, the police and paramilitary forces, entrenched in counter-insurgency operations, have come to realize the critical importance of training, astute leadership and need for advanced skills. There is also a need to adopt a more humane approach by projecting soft power, rather than a sledge hammer approach, which has traditionally underpinned India’s approach to combating insurgencies. While there is growing recognition at the national level that this problem requires deft political handling, which is where the real solution lies, little has happened.

The Indian government would benefit from implementing the recommendations outlined in a report entitled  “Development Challenges in Extremist Affected Areas”, published by an expert committee set up to identify the underlying causes of the militant resurgence of this once low-key socialist movement. This committee was instituted by the Planning Commission of India at the request of the Union Government in May 2006. It was tasked to identify the causes contributing to widespread unrest and discontent in India’s tribal regions. A particularly poignant point the report makes is the fact that this resurgence, or the Maoist uprising, is a result of deprivation, inequality, failure of the state to ensure all segments of society are able to enjoy their basic entitlements and needs, safeguarded by the Constitution and other legislation. The final report was submitted in March 2008 and contained a comprehensive study and analysis of the problem. The Commission’s recommendations are based on three basic principles:

This report is an outstanding piece of work done by some of India’s finest minds and greatest citizens. With the analysis already present, the need of the hour is practical and urgent action on the ground. So far little has happened in the implementation of the recommendations.

From my own experience in India’s military, which included many years of active service in counter-insurgency operations, it is clear that the use of random and reckless violence will invariably back-fire, as it tends to sustain the insurgency, just as it has in other parts of India where the government continues to combat insurgencies over decades.  In most cases such conflicts are unwinnable, each side inflicting increasing levels of violence, creating a vitiated environment of hate and a vicious cycle of vendetta and revenge, with civilians bearing the brunt. Often these parts of India have seen protracted socio-economic deprivation, intergenerational poverty and a deep sense of injustice. This is particularly true given the fact that the problem of left-wing extremism and the question of social justice are essentially entwined in India. Unfortunately, this form of militancy has all along been sustained by India’s wide and deep rooted inequality with conflict over land ownership, struggles for the rights over mineral and forest wealth, poverty, and denial of justice and human dignity, which plays a pivotal role in alienating a large segment of the working class poor.  Maoist stronghold districts often reflect the harsh reality of the wider local region, which is typically affected by either exploitation of peasantry, struggles over mineral wealth, or denial of rights over forest land to the local tribal population.  As so aptly described in his book Poverty Amid Plenty in the New India, Dr. Atul Kohli, my professor at Princeton University, depicts encroachment of tribal land held as common property to be a primary stimulant for resistance movements.

Historically, the Maoists have taken advantage of this popular discontent to expand their strongholds and to secure influence over a large geographical area, known locally as the “Red Corridor”. This stretch of land, spanning 92,000 square kilometres, is home to concentrated tribal pockets and some of the poorest, underdeveloped and oppressed regions of India. The Red Corridor in reality epitomizes socio-economic deprivation and exploitation at its worst. While the region is rich in mineral resources like coal and iron ore deposits, natural gas and forest wealth, the State has failed to ensure for the local population access to basic services, such as education, health, water and sanitation, employment and human development in general. This failure has resulted in the ready embrace of Maoist ideology by the local populace. Displacement of the local population due to large scale projects, and the failure of the law and order machinery to prevent regular exploitation of the poor by local landowners, traders, a section of police and corrupt government officials have ensured complete estrangement and lack of trust in the government. Unfortunately what is increasingly visible in the Maoist affected areas is the convergence of crime, business and politics.

The resurgence of ultra-left militancy, after it had lost momentum and relevance decades ago, can also be linked to the advent of neo-liberal policies in India. Since 1980 India’s political economy took a new direction, but it failed to include India’s numerous excluded groups in the polity and the economy. Inequality was further aggravated by the sale of tribal land, mineral and resource rich, to corporations that were then seen to exploit local populations. When the system of governance was unable or unwilling to deliver needed services, the local populace turned towards illegal tactics which held the appeal of providing results in a more direct, immediate and localized manner. The popularity of Maoism was thus a natural consequence, continues to be an ever growing threat that could have grave socio-economic consequences for India, and could seriously undermine India’s economic progress.

The government cannot afford to wait for stability before development can happen. Its modus-operandi needs to combine development with law and order, along with active engagement of all stake holders from the affected communities themselves, such as tribal elders, youth groups and women’s groups. A vital amount of support for the Maoist movement in India is derived from disadvantaged adivasis (tribals) and dalits (lower classes). These two groups form the core of the most disenfranchised and subjugated peoples in India, and are routinely kept out of any development dividend. Sadly, in India’s social ladder these groups are still heavily discriminated against in several parts of the country. Human development indicators for these groups showcase the truly terrible and pathetic situation they find themselves in. There is wide-spread hunger and malnutrition in the tribal areas. In fact, there are more malnourished children in India than all of Sub-Saharan Africa, which Prime Minister Singh has called a national shame .

The state police in most of the Maoist strongholds remain weakened by a skills crisis, weak leadership and shortage of manpower to counter guerrilla tactics. The civil servants deployed in these areas are not motivated and should be far more capable and better trained in order to deliver the important services these communities need. The security forces should be better trained at winning “hearts and minds,” and this requires enlightened and smarter leadership within their rank and file, as well as a highly sensitised and competent civil service to back it. In addition, simultaneous efforts at improving physical and social infrastructure throughout the country, combined with poverty alleviation programs, need to be put in place. There is also a need to offer an olive branch of reconciliation to the outlawed ultra-left groups and to establish mechanisms for dialogue and conflict resolution. In addition, the security forces conducting counter-insurgency must be better educated on human rights, with a special emphasis on scrupulous, legal methods of counter-insurgency warfare. A culture of respect and human rights must engender the ethos of all law enforcement agencies throughout the country with “zero tolerance” for impunity.  It is also evident that large numbers of young boys and girls have been drawn into the conflict, as child soldiers. This is a very troubling development.  Besides moral reasons, there are strong strategic arguments for not using child soldiers. Once such conflicts end, these children who may have turned into young adults over time will need to be demobilized and reintegrated into their communities. And experts say the prospects for a lasting peace are hurt by large populations of psychologically scarred children and young adults going back to civilian life. These parts of India risk long-term instability as generations of youth are sucked into other insurgencies or turn to crime. Left unchecked, it augurs like a bad omen (which could lead to civil strife), increasingly uses up blood and treasure, and keeps the situation in parts of the country highly volatile, all to the detriment of India’s future growth and prosperity.

The government could start by establishing a panel to oversee the recommendations of the Expert Committee. This panel must be all inclusive, staffed by members of parliament hailing from the affected districts, policy makers, opinion leaders, the private sector, intelligence and security officials, as well as academics. Land rights for the dalit and adivasi people through suitable parliamentary decree must be high on the agenda. It is very important to focus on women and child health and development initiatives, as well as education. It is tragic to see the large numbers of educational and health facilities targeted in this conflict, often by the Maoists themselves. These must be seen as sacred and inviolable. Improving education and child health actually provides the government with some manoeuvring space to demonstrate its commitment to people living in the Red Corridor, as well as some quick wins. For this to happen, healthcare access, access to nutritious food and education facilities will have to improve dramatically. This will be dependent on a large financial commitment from the government with robust oversight mechanisms in place. Assistance from national institutions like the Indian Red Cross, with its vast network of volunteers and as an auxiliary to the Government of India, guided by its fundamental principles of independence, neutrality and humanity, could even be a broker of confidence building between the various parties.

The proposed solution of development is a basic mandate of the Government. Like other developing countries, the Government of India is still in the process of uniformly delivering (or failing to deliver) on this mandate. The Maoist spectre should therefore act as a catalyst for a paradigm shift in the focus of the government from a sole concentration on growth to a realization that equitable regional distribution is a prerequisite for the attainment of India’s global potential.  As the expert committee report states, the alternative is not blind repression or capitulation to lawlessness; it is the realization and acceptance of common opportunities for all within a single society. Violence cannot build a better society. The longer this crisis persists, the more likely it will become intractable. The ball is in the government’s court.

Siddharth Chatterjee was a Major in India’s Special Forces and was decorated for gallantry.  http://www.linkedin.com/in/siddharthchatterjee1un

The views expressed in this article are the personal views of the author and do not in any way reflect that of the organization he serves or has served in the past.