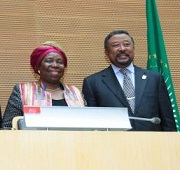 The 19th African Union (AU) summit took place from July 9-16, 2012 in Addis Ababa, Ethiopia, under the theme of “Boosting Intra-African Trade.” However, more than the official theme of the summit, a recurring slogan was the call for Africa’s unity. Collectively bruised by the deadlock over the inconclusive election of a chairperson of the AU commission in January, African leaders were resolved not to repeat the same mistake. Unlike in January when the incumbent, Gabonese Jean Ping, failed to win the requisite majority of votes to ensure his re-election, the July 15 vote resulted in the appointment of South Africa’s Nkosazana Dlamini-Zuma as the new chairperson of the commission.Key Conclusions
The first highlight of the summit confirmed the space women are increasingly being given to hold the highest positions of leadership in Africa. The second highlight can be seen in the AU leaders’ efforts to put the interests of the organization before their individual countries’ interests. Thirdly, beyond this façade of unity, major challenges are facing the new AU chairperson to achieve the organization’s highest efficiency and the continent’s objectives of sustainable peace, security and development. Mrs. Dlamini-Zuma’s success will greatly depend on her diplomatic skills to bridge the language and political divide widened by an aggressive campaign, and on South Africa’s ability to convince its fellow African countries of its genuine concern in advancing the Africa agenda.Analysis
The election of South African home affairs minister Nkosazana Dlamini-Zuma at the head of the AU commission was hailed as a first in the history of the continental body since the creation of the AU predecessor, the Organization of African Unity, in 1963. Mrs. Dlamini-Zuma, 63, won a majority of votes in three consecutive rounds that opposed her to the outgoing president, Jean Ping, before collecting more than the required two-thirds majority–37 out of the 51 possible votes–in a solitary fourth round that followed the statutory withdrawal of her opponent.

The suspension from the AU organs of both Mali and Guinea Bissau for unconstitutional change of government in March and April this year, as well as Nigerian President Goodluck Jonathan’s absence from the summit, were seen to have weakened the Economic Community of West African States (ECOWAS) bloc, which officially supported the Gabonese candidate. Mr. Ping’s “unlucky” defeat has also been attributed to the untimely absence of the summit’s host, Ethiopian President Meles Zenawi, who reportedly traveled to Belgium for medical treatment. However, despite the unanimous support of the Southern African Development Community (SADC) countries, Mrs. Dlamini-Zuma’s victory was far from certain.

Notwithstanding African leaders’ pledge in the 2000 AU constitutive act to promote gender equality, patriarchy remains a strong impediment to most African women’s political participation, and finding them in top leadership positions at national and continental levels is still exceptional. Weeks before the summit, the courageous decision of Malawian president Joyce Banda not to host the meeting as initially decided by her predecessor, late President Bingu wa Mutharika, due to the participation of ICC-indicted president Omar al-Bashir of Sudan, put the spotlight on one of the only two African female heads of state.

With the election of Mrs. Dlamini-Zuma as chairperson of the commission, AU heads of state confirmed their growing recognition of African women as equally competent and skilled leaders. Mrs. Dlamini-Zuma, who dedicated her victory to all women in Africa, committed herself to working to bring about the AU vision of a growing continent which should occupy “its rightful place among the nations of the world.”

Major efforts are needed to achieve these goals. The enduring poverty despite positive macro-economic prospects; persistent security challenges in Somalia, the Democratic Republic of Congo – where the AU has announced its readiness to send a regional force to neutralize the various rebel groups – Sudan and South-Sudan; as well as the recent crisis in Mali and the other security problems caused by the escalation of the Libyan crisis in 2011, are some of the key priorities to be addressed by the new AU commission head.

Moreover, expectations are high of Mrs. Dlamini-Zuma to continue advancing democracy, human rights, and the rule of law across Africa. For instance, the AU charter on democracy, elections, and governance, which entered into force in February this year, is yet to be ratified by 37 African countries. Mrs. Dlamini-Zuma, who indicated there would be no policy shift but a strong emphasis on implementing the existing resolutions, will also have to tackle the capacity limitations facing the AU. Out of 1,200 approved posts, the AU is still functioning with only 48% of its staff, with its various departments spending an average of one-third of their budget.

Credited for her hard-work, competence, and experience–including as chair of the AU peace and security council in June 2006 when she served as South Africa’s foreign minister–Mrs. Dlamini-Zuma’s success as the new AU chief will require that she exercises her full diplomatic skills and powers to bridge the divide caused by a campaign marked by its aggressiveness, and lingering doubts over South Africa’s genuine interest for African affairs. South Africa’s breaking of an unwritten rule which prevents continental powerhouses from running for AU top jobs, and the running of an election campaign which remained divisive and increasingly personalized until the very end, have unearthed regional dissensions that transcend the traditional Anglophone-Francophone barrier. Mrs. Dlamini-Zuma’s candidacy was opposed by countries including Nigeria, Egypt, Ethiopia and Kenya, which see their strategic interests threatened by an increasingly powerful South Africa. Furthermore, Mrs. Dlamini-Zuma’s election raised questions over its possible utilization by South Africa for political gains, both internally to secure a second term in office to President Jacob Zuma, and internationally to campaign for an African permanent seat on the United Nations Security Council.

The indisputable victory of the South African candidate at the end of a closely-contested vote shows African leaders’ will to move beyond a leadership battle that threatened to weaken the AU and ensure that the continental organization regains its credibility and continues its efforts to bring peace, security, and development to the African people. For Mrs. Dlamini-Zuma’s victory to also be one for all Africans, the former South African minister will need to demonstrate her loyalty to the entire continent, and South Africa will need to step up its efforts to act and be seen as advancing the Africa agenda beyond individual benefits for a greater political clout in multilateral circles.

Mireille Affa’a-Mindzie is a Research Fellow at the International Peace Institute. She tweets at @affaamm.