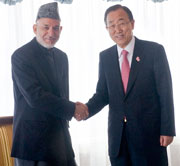 From New York to Tokyo to Kabul and beyond, donors and recipients of foreign assistance, especially those country recipients coming out of conflict, are having frank conversations about aid effectiveness. Donors are feeling the pinch of tight budgets and grumbling taxpayers. Recipient governments complain of competing donor priorities, while their people watch money flow to costly foreign contractors and/or local government corruption.

One phrase that is oft repeated in these discussions is “mutual accountability,” words that were given new life in November 2011 during the Fourth High Level Forum on Aid Effectiveness in South Korea when the “New Deal for Engagement in Fragile States” was launched. The New Deal aims to focus on a context-specific set of peacebuilding and statebuilding goals; to build trust among donors and recipients; and to work from a recipient country vision and plan. “Mutual accountability” now rings throughout many development cooperation discussions, as was the case at the July 5-6 Development Cooperation Forum, hosted by the United Nations Economic and Social Council.

Aiming to balance the scorecard all around as countries coming out of conflict seek security, legitimate governance, and job-creating economic growth, practitioners are trying mutual accountability. The Tokyo Framework for Mutual Accountability launched July 8 by Afghanistan and the international community is the latest example. The framework sets out goals and performance indicators for Afghanistan in the areas of governance (organizing transparent, credible elections processes in 2014 and 2015); rule of law and human rights (enactment of a legal framework to combat corruption, implementation of the National Action Plan for Women and the Elimination of Violence Against Women law); public finance (implementation of the IMF program); budget execution (transparent tax and customs systems); and economic development (allocating resources to achieve Afghanistan’s millennium development goals and improving the business climate).

For its part, the international community agrees to align 80 percent of assistance with national priority programs (50 percent through the national budget of Afghanistan, in accordance with previous commitments) and also states its aim to increase the share of assistance—through the Afghanistan Reconstruction Trust Fund or other incentive mechanisms, as requested by the government of Afghanistan—to 10 percent by 2014, with a goal of 20 percent at the end of the transformation decade.

Recent history shows donors and countries coming out of conflict have a mixed record on implementation and impact in these partnership arrangements (see a study by the International Peace Institute on compacts). Donors have rarely adjusted their practices to support recipient country-led “national priority programs” or moved their funding onto national budgets. Donors and recipients have lacked sufficient trust and confidence in each other to move along this path. Similarly, newly-established governments in countries coming out of conflict rarely have achieved and held the local legitimacy to lead in a process that almost always involves a change in old-time political power structures.

Questions to consider in assessing the prospects that such a framework will produce positive results in Afghanistan are 1) is the evolution of the security situation going to support this renewed partnership? and 2) is there sufficient political will, trust and confidence between Afghanistan and the international community to follow-through and meet the performance standards established in the framework?

Afghanistan has made enormous progress in the last ten years, yet its gains are tenuous. At a forum immediately preceding the July 8 Tokyo Conference, Lakhdar Brahimi and Sadako Ogata suggested an inclusive political process including women, minorities and the Taliban as the basis for peace and security, and to create positive momentum for further progress. In the area of security, the US and other international actors from China to India to NATO are negotiating or concluding strategic partnership agreements centered on security.

In addition, the US named Afghanistan a major, non-NATO ally almost simultaneously with the Tokyo Conference. So, the West and other neighbors appear to be beating the drum that they are not abandoning their security commitments to Afghanistan when the ISAF/NATO combat troops leave at the end of 2014.

There is less news on the process of peace and reconciliation with the Taliban, although it is striking that a member of the Taliban political council traveled to Japan to explain the Taliban view at an academic conference alongside the Afghan Secretary General of the High Peace Council Mahmoud Stanekzai about a week before the Tokyo Conference. Will the Taliban participate in a reconciliation dialogue linked to Afghanistan’s 2004 constitution that protects human rights, including women’s rights? If they know they can’t win, as reported by the Guardian, will they continue to fight, or come out of the shadows to the negotiating table?

On the second question of reframing Afghanistan’s relationship with the international community: only time will tell. There are details in the Framework Agreement that still need to be worked out—important ones—regarding the 2014 and 2015 elections and relating to moving more aid on budget.

Domestic forces in Afghanistan combined with international partnership will need to hold the Karzai government and its successor to the performance standards of the framework. In addition, the international community—United Nations, donors and neighbors—will, perhaps nudged by world and domestic public opinion, need to hold itself accountable as well.

Maureen Quinn is a Senior Adviser at the International Peace Institute.