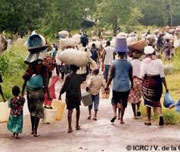 As the world witnesses the continuing bloodshed in Syria, the UN Secretary-General (UNSG) recently released its ninth report to the Security Council on the protection of civilians in armed conflict (UN Doc. S/2012/376, May 22, 2012). This report, traditionally published every 18 months since 1999, will be discussed by the Security Council at its next open debate on the protection of civilians (PoC), scheduled for Monday, June 25.

This document first gives an overview of “the abysmal state of the protection of civilians” today, drawing heavily on developments that have affected civilians around the world since its last report of November 2010, such as the conflicts in Ivory Coast, Libya, and Syria. It then lays out the five core challenges that structure the UNSG’s advocacy effort since its 2009 report: enhancing compliance by parties to conflict with international law; ensuring greater respect of international law by nonstate actors through better engagement; strengthening protection of civilians by peacekeeping and other missions; ensuring humanitarian access; and strengthening accountability for violation of international law.

The variety of challenges it covers—from humanitarian access to accountability through peacekeeping—shows that PoC has become a broad concept encompassing a number of different activities to which a wide array of actors contribute. This analysis aims to highlight some of the main takeaways of the report from the perspective of a humanitarian.

Key Conclusions
The report makes interesting and at times bold contribution to the PoC agenda, given the political sensitivities surrounding some of the examined issues. It highlights some of the unfortunate effects of the “war on terror” on civilians, and explores some of the tensions between the multitudes of actors contributing to their protection. In this respect, one could have hoped that more attention be devoted to tensions between the pursuit of better humanitarian access to civilian population and accountability for violation of the law.

Perhaps the most interesting aspect of the report is its attempt to clarify the concepts of PoC and “responsibility to protect” (RtoP), the conflation of which is at the core—at least in part—of the current blockage of the Security Council over Syria and could well be detrimental for both concepts. The June 25 open debate on PoC is a good opportunity to discuss both concepts, agree on their differences, and acknowledge the heavy implications that RtoP may have on regimes responsible for mass atrocities.

Analysis
One noticeable aspect of the report is that it addresses some of the perverse effects the defunct Global War on Terror had on the protection of civilians. Although the contentious label of GWoT is now part of history, some of its legacy remains such as the controversial use of drones for targeted killings and the toll it takes on civilians. The UNSG is right to worry that “as more states obtain this technology, these issues will become more acute.” The UNSG also voices strong concerns about the increasingly all-repressive approach to nonstate armed groups regularly labeled as “terrorist” and therefore not worthy of any kind of dialogue. While groups resorting to terror tactics targeting civilians must be firmly condemned, the “terrorist” labeling has become a handy excuse for some governments to resort to brutal tactics to tame insurgencies—as in Sri Lanka in 2009 or currently in Syria—while denying humanitarian actors any possibility to engage nonstate armed groups for better compliance with humanitarian and human rights law, and depriving them of humanitarian access to populations in need.

A second noteworthy aspect of the report is it acknowledges some of the tensions between peacekeepers and humanitarian organizations, and that although they are bound by the same goal of protecting civilians in numerous contexts, they have different approaches to their respective mandates. While giving credit to peacekeepers’ contribution to PoC, the UNSG acknowledges the risks of subsuming humanitarian actors into the broader political objectives of UN integrated missions to the detriment of humanitarian access and security, especially in contexts of conflict.

The report gives less attention however to the tensions between humanitarian access and the pursuit of accountability for violations of humanitarian and human rights law. The report relates developments aimed at enhancing accountability and endorses some concrete recommendations from a workshop on accountability co-organized by the Office for the Coordination of Humanitarian Affairs and the Permanent Mission of Portugal in New York. While these developments are important contributions to the broader PoC agenda, the report could better caution against assimilating activities of humanitarian organizations in the field and those of fact-finding mechanisms or commissions of inquiry that aim at engaging individual criminal responsibility. Indeed, assimilating these different actors into a same lot can raise suspicions among parties to conflicts that the humanitarian actors are “spying” on behalf of international justice, leading to further constraints on humanitarian access. The expulsion from Sudan in 2009 of 16 leading humanitarian organizations following the indictment by the International Criminal Court of Sudanese President Omar Al-Bashir is a useful reminder in that regard.

Last but certainly not least, the report attempts to unpack “the continuing and inaccurate conflation of the concepts of the protection of civilians and the responsibility to protect” that partly explains the current stalemate over Syria and renewed sensitivity by some member states vis-à-vis the PoC agenda. Interventions in Ivory Coast and particularly in Libya in 2011 on behalf of the “Responsibility to Protect” (RtoP) raised concerns among some member states—most notably the veto-holders Russia and China—that protection of civilians has become an excuse for regime change.

The report takes great care explaining the basic differences of concepts, but somewhat fails to pursue this explanation to its logical end: as noted by the Global Centre for the Responsibility to Protect, “Where a regime is the primary perpetrator of ongoing mass atrocity crimes, changing the leadership may be the most effective way to end the commission of crimes.” Hence, in certain conditions, regime change might become the ultimate objective of the RtoP concept, as its raison d’être is to end mass atrocity crimes of genocide, ethnic cleansing, crimes against humanity, and war crimes—a far more focused and compelling goal than the not-less-noble ones pursued under the broader PoC concept.

Given the conflation of both concepts and current sensitivities notably around Syria, knowledgeable observers are doubtful that Monday’s open debate will be followed by any kind of concrete outcome, such as a presidential statement or a resolution. However, it can be hoped that this discussion will contribute to clarify the differences between both concepts. In particular, the implications that RtoP may have for the viability of a regime engaged in mass atrocities should be openly discussed, while acknowledging that it goes far beyond the PoC agenda. Hopefully, this report and the ensuing discussion will contribute to easing the concerns expressed by China that “there must be no attempt at regime change or involvement in civil war by any party under the guise of protecting civilians,” when such actions were actually motivated by the much more pressing imperative of halting mass atrocities.

As the saying goes, “The devil is in the details.” Nowhere in the founding paragraphs of the RtoP concept—paragraphs 138 and 139 of the 2005 World Summit Outcome document—is the phrase “protecting civilians” to be found. Therefore, should the Security Council decides some day to again authorize the use of force on behalf of the RtoP concept, it might want to consider avoiding the phrase “protecting civilians” as it did in its resolution 1973 on Libya. Rather, it could stick to the wording of the World Summit Outcome document: “protecting populations”—which, technically, could include non-civilians such as prisoners of war—from mass atrocities.

Jérémie Labbé is a Senior Policy Analyst at the International Peace Institute.