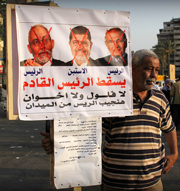 For the first time in thirty years, Egyptians held an election without knowing beforehand which candidate would emerge as the winner. This first round of the presidential election was held on May 23-24, 2012, though none of the four major contenders were able to secure the required 50 percent majority to win the election outright. It is expected that the runoff election between Mohamed Morsi of the Muslim Brotherhood’s Freedom and Justice Party and Ahmed Shafiq, a former prime minister and unabashed supporter of the regime of former President Hosni Mubarak, will be held on June 16-17, 2012.

The runoff will be the most polarizing election for the two-stage contest and further constitutes a deep dilemma for the Egyptian people. Shafiq is seen as a secular figure and a remnant of the old regime of Mubarak, while Morsi has repeatedly promised to implement Islamic law if elected. Morsi has also called for a review of the 1979 peace treaty saying that Israel did not respect the accord, though the Brotherhood has stated it would not renege on the accord. Furthermore, there is as a bitter rivalry between Shafiq and Morsi, as the Muslim Brotherhood is against the notion of handing power over to remnants of the old Mubarak regime.

During the election, it was alleged that some of the vote outcomes had been rigged and that members of the security forces had voted for Shafiq, though the electoral commission rejected these complaints after a recount. On the announcement of the result, which saw a tie between Morsi and Shafiq, hundreds of demonstrators took to Cairo’s iconic Tahrir Square to rally against Shafiq, and a group of protesters set fire to Shafiq’s campaign headquarters in Cairo.

A major twist to the election was the defeat of Amr Moussa, former Secretary-General of the Arab League, who during the campaign period was the front-running “stability” candidate but was only able to win 10.9 per cent of the total votes cast. He has since stated that he would not support either of the two runoff candidates. The turnout for this election was estimated at 42 percent, and it is even anticipated that many voters will abstain from voting in the runoff election.

The election results for the first phase seems to suggest that the Egyptian people are searching for a credible third alternative for those that fear the imposition of a religious state by the Brotherhood and those that do not want any remnant of the Mubarak regime to take power. The Brotherhood has struggled politically since they won the parliamentary elections and have lost the support of many after appearing power-hungry and self-serving.

During the first phase of the election, Morsi sought popular support by appealing to conservative Muslim voters with promises of Sharia and stringent family values. The question that lingers is if the Brotherhood’s political machine can convince voters that Morsi will represent the Egyptian people and not just the Muslim Brotherhood, since no one can fathom what the Brotherhood would do once they are in power.

Furthermore, the Brotherhood would have to show its commitment to implementing its ambitious “Renaissance Project,” deliver democratic gains such as create economic opportunities, upgrade the health care system, and deliver an all inclusive government as well as submitting to democratic oversights.

While it is apparent that Egypt had a free election, the demands of Egypt’s young revolutionaries has not been met, and elections in Egypt as well as in other parts of Africa seems to be a fading shadow of democracy which could endanger the fragile democratic project itself as the Egyptians struggle for economic, social and political progress. Truly, the Egyptian revolution still has a long way to go to achieve true power.

Ayodele Akenroye is a PhD Candidate in Law at McGill University, Montreal, Canada