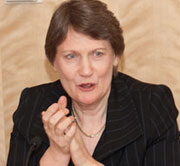 “If Rio is treated as a UN conference which can mobilize and enthuse people, and not as some sort of treaty negotiation where every single word carries weight, then I think we could get through it in good shape,” says Helen Clark, Administrator of the United Nations Development Programme, about the UN Conference on Sustainable Development (Rio+20) taking place June 20-22.

“The unifying vision has to be found around promoting human development within the boundaries of nature,” she says. “That has been the formula which succeeded at the Stockholm Conference forty years ago. It’s the formula that succeeded at the Earth Summit, and it’s what needs to drive this one.”

“If Rio is seen as an environmental conference, it won’t succeed. It has to be the environment and its protection and conservation pursued at the same time as we enable human development in a world where so many hundreds of millions of people still live hungry and still live extremely poor, and not every child is in school. So we have to bring these things together.”

On Ethiopia’s plan to include a low carbon, climate-resilient green economy strategy into their development plan, she says, “If Ethiopia can do that as a least developed country, anybody can do it.”

The interview was conducted by Francesco Mancini, IPI’s Senior Director of Research.

Francesco Mancini (FM): We are here today with Helen Clark, the Administrator of the United Nations Development Programme since April 2009. Welcome, Ms. Clark, and thank you very much for talking to the Global Observatory.

HC: Firstly, the negotiations are going on as we speak, and they’ll go on right up to the eve and maybe even during the high level segment itself. So we can’t be too precise about what will come out with only around 70 out of 259 paragraphs agreed right now.

The unifying vision has to be found around promoting human development within the boundaries of nature. That has been the formula which succeeded at the Stockholm Conference forty years ago. It’s the formula that succeeded at the Earth Summit, and it’s what needs to drive this one.

If Rio is seen as an environmental conference, it won’t succeed. It has to be the environment and its protection and conservation pursued at the same time as we enable human development in a world where so many hundreds of millions of people still live hungry and still live extremely poor, and not every child is in school. So we have to bring these things together. That’s where the unifying vision is to be found.

Now I don’t think there’s disagreement about the “what has to be done” in terms of the transition to the green economy. For the developing countries, the big issue being raised is the how. Where is the funding? How do we build the capacity? How do we get the skills transferred? How do we get the appropriate technology in place at a price we can afford?

There’s a lot of focus in New York on the debate around implementation. Clearly, we’re in a time when the traditional donor countries, by and large, are experiencing sluggish, if any, growth at all. And so they’re rather preoccupied with the immediate fiscal conditions their countries face.

But we’re not actually talking about tomorrow. We’re talking about decades here. We’re talking about a vision for the future – a transition to what we know is possible, by way of advancing economic, social and environmental issues together. And I hope that the leaders at Rio will rise to this bigger vision of what has to happen.

FM: Even though the progress has been uneven, we do have big lessons from the Millennium Development Goals, particularly that the MDG’s can be drivers for a collective policy and advocacy. Do you think that there is some likely agreement around a new set of, let’s call them “sustainable development goals”? I would like also to bring in the equitability element. Inequality is truly a global trend in fact. Do you see some likely agreement around this set of goals?

HC: I think the likelihood is that Rio+20 will call for a process to define goals, and that then needs to feed into the discussion already underway on the post 2015 development framework, because 2015 is when the Millennium Development Goals targets time bound for. And so the issue is what after 2015? What it’s important not to lose is the human focus of the MDG’s, the time bound nature, the specificity, and the fact they they’re very easily communicated.

In my lifetime, I’ve seen so many sets of internationally agreed development goals promulgated. No one can remember any of them. They tend to fade into the ether because, unlike the MDG’s, they were not specific, time bound and easy to communicate. And that means easy to sell to decision makers.

Now the result of having those characteristics with the MDG’s has been that development partners have written the MDG’s into the strategies for official development assistance. So many developing countries have based their national development strategies around the MDG’s and even added their own MDG’s in the cases of Cambodia and Laos, dealing with the explosive legacy of war and the need to remove landmines and unexploded ordnances. Mongolia added good governance as a ninth goal. Countries have been very creative. So let’s not lose these characteristics.

But for sure, the next generation of goals will need to put more emphasis on human development within the boundaries of nature because otherwise we destroy the very basis on which life on the planet depends.

FM: In summit meetings there is a tendency to adopt lofty goals that don’t always translate in the field. You stress the implementation element a lot. We have challenges of coordination, funding, as you mentioned, and capacities, at all levels. What can Rio produce to address some of these more systemic challenges, especially if a new set of goals is to be adopted?

HC: I think increasingly, development these days is about two things. It’s about building capacities, and that is capacities also to access the finance that is out there. If we look at the transition to the greener economy, a lot of the finance to make this possible will be private finance. And it is accessible if you have the capacities, the institutions, the strategies, the means of verifying, monitoring, reporting, etc. So a very critical development role is around supporting countries to develop those capacities, to get into the game.

That means that with the greener finance of the future we don’t want an outcome as with the Clean Development Mechanism of the Kyoto Protocol where almost all of the money went to fast growing emerging economies which were large and very little to the least developed. So I put tremendous emphasis on building capacities.

The second thing development is about these days is the exchange of ideas and best practice. We see, in UNDP, so many incredible things which are worthy of adoption, adaptation and emulation. Take for example, in the context of Rio, Ethiopia’s low carbon, climate-resilient green economy strategy. Ethiopia is one of the poorest countries on earth, but it is making a statement. It says, of course we want human development for our people. Our people’s living standards have to radically improve, but we want to do this within the boundaries of the natural heritage and endowment that we have. If Ethiopia can do that as a least developed country, anybody can do it. And they have shown strong leadership on it. So, part of our job is to link people with brilliant ideas and strategies and show how it’s possible for even the poorest countries on earth to tread this road.

FM: There’s been a recent Bonn climate meeting, and we can probably safely say that it was a little disappointing. In fact, there is very little indication that we are progressing toward more agreements in this area. Do you see this renewed north-south discord as being unique to the climate issue, or do you think this will spill over into the Rio+20 talks as well?

But then we also saw Copenhagen which didn’t realize on the vision for the climate talks that Bali had set out. We saw an improvement in Cancun. We saw a knife-edge outcome to keep things going in Durban. I think that this year with respect to the COP (Conference of Parties) in Qatar, it’s best not to go backwards, but at least to be in a position to keep moving forward.

Rio+20 comes in the context of all of this. I think if the emphasis is on it as a knowledge-sharing, motivational, galvanizing meeting, and if something along the lines of a Gender21, which never had binding commitments in it, could be produced, we would all go away saying: look, we know what needs to be done; there’s fantastic experience to share on how to do it. Yes, developing countries do need more support to do it effectively and in a timely way. But let’s look out decades here in terms of the transition and not be so consumed by the fiscal problems of the day that we don’t see the bigger picture.

That’s my hope. If Rio is treated as a UN conference which can mobilize and enthuse people and not as some sort of treaty negotiation where every single word carries weight, then I think we could get through it in good shape.

FM: As a follow up, do you think Rio could play a role in reinvigorating the UN Framework on Climate Change process? Could there be a climate goal at the end of the process?

HC: I think a reasonable outcome from Rio will be positive for the climate talks and positive in at least holding the line at where we go to at Durban late last year. Whether any of the goals in the end will specifically tackle climate remains to be seen. They may be a little broader than that because the climate issues, while very pressing, are one of a subset of issues in the environmental realm, obviously with great economic and social implications. But a success at a major sustainable development conference undoubtedly will be helpful to pushing those climate talks forward.

FM: Thank you very much for sharing your thoughts with the Global Observatory and good luck with your trip to Rio.