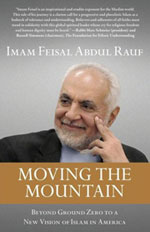 When Imam Feisal Abdul Rauf tried to establish a community center with a mosque in it in lower Manhattan, he was attacked as a “militant Islamist” for trying to build a “ground zero mosque.” The Cordoba House project was intended to help heal the wounds of 9/11, promote interfaith understanding, and work against violent extremism, but extremists of another kind used it to fan the flames of Islamophobia instead.

Now that the propaganda war against him has died down, Abdul Rauf has published his calling card to the United States in a new book, Moving the Mountain: Beyond Ground Zero to a New Vision of Islam in America. He sets out his stall as an American Muslim, an imam who has been working on interfaith dialogue in the US for more than a quarter of a century, with a particular focus on fighting extremism and healing US-Muslim relations since 9/11.

Of course, those who knew him before the Cordoba House controversy were already well aware of this. At the height of this crisis in 2010, New York’s Mayor Michael Bloomberg—a man not known for sentimentality—apparently choked up during a speech when citing Abdul Rauf’s deeply moving words on the fundamental commonalities between the Jewish, Christian, and Islamic faiths. And the book is full of thoughtful reflections on the core messages of the Abrahamic religions that should serve to unify rather than divide.

Contrary to the concept of a clash of civilizations, Abdul Rauf’s coherent and compelling message is that the real battle lies between religious extremists and moderates on all sides. Moderation—a powerful word in Arabic that is more constructive than conciliatory—is Abdul Rauf’s motto, representing a way of being that encapsulates the principles of nonviolence. As a result, he is helping to build a “global movement of the moderates” across all faith traditions. The prime minister of Malaysia launched the idea at the UN General Assembly in October 2010.

Despite his thought-provoking account of his life, work, and vision in Moving the Mountain, Abdul Rauf mostly remains reticent about Cordoba House. It’s not clear whether the vitriol against him, which at one point amounted to a credible threat on his life, has simply taken too deep a toll, or whether he’s waiting to strengthen his position and build up more support before attempting to move the initiative forward again. Given the power of the propaganda machine that worked against him before, he may indeed need to move some mountains first.

Marie O’Reilly is the Publications Officer at the International Peace Institute.