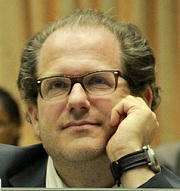 “Many African countries are now among the fastest growing economies in the world. But it’s a paradox because we haven’t seen this growth translate into the type of food security that we need,” says Sebastian Levine, Economic Adviser at UNDP who helped lead and coordinate the research for the first Africa Human Development Report. Mr. Levine further discusses investing in agricultural development to make it more profitable, the challenges of adapting to demographic and environmental pressures, gender inequality, and the very close link between food insecurity and conflict.

The interview was conducted by Mireille Affa’a-Mindzie, Research Fellow at the International Peace Institute.

Mireille Affa’a-Mindzie (MA): Good Morning. Today we are speaking with Mr. Sebastian Levine, Economic Adviser for the United Nations Development Programme and a member of the team involved in producing the first Africa Human Development Report, launched this month by UNDP. Welcome to IPI’s Global Observatory.

Mr. Levine, what specific reasons motivated a specific Human Development Report on Africa? Why was food security chosen as the main focus of the report? And what do you expect to be its main impact?

Sebastian Levine (SL): The Human Development Reports are produced by UNDP every year at global level, increasingly at national level and sub-regional level. And several hundred reports have been produced in Africa and individual countries. So we thought it was time to collect all this knowledge and collect our capacities around a region-wide report, to get analytical work done and policy recommendations around probably the most pressing issues facing Africa today, which is food security.

So the way these report are done, these are facilitated by UNDP, but basically they bring together the, bring together experts, development practitioners, academics from around the continent as well as abroad and are intended to spur debate. They’re independent reports that are intended to spur debate. So in terms of the impact, what we hope is really that we can put forward a collective body of research and a series of comprehensive policy recommendations that can be discussed and debated and be applied to individual countries in accordance with their specific circumstances and needs.

MA: What are the key elements and strategies that will tackle food insecurity in Africa? And how can the link between food security and human development be activated?

SL: So what we’ve seen in the past decade or two is a resurgence in the economic growth of Africa. Many African countries are now among the fastest growing economies in the world. But it’s a paradox because we haven’t seen this growth translate into the type of food security that we need. And so the levels of, the numbers of hungry people, the levels of stunting and malnutrition among children has remained stubbornly stagnant.

What this report argues for is public action in four broad areas. The first is to raise agricultural productivity, especially among smallholders. The second is to focus specifically on enhancing nutrition and nutrition policies, especially among children. And we look at a series of policy recommendations to promote resilience and social protection. And finally we argue strongly for the, for policies that empower especially the rural poor and especially women.

MA: You mention increased agricultural production. How can this production be achieved in practice, especially in the context of growing demographic and environmental pressures?

So the report argues and if you look at some of the figures, the reason why Africa has been held back in terms of food production is because of a very low uptake of inputs such as fertilizer or irrigation. And so the key challenge going forward is really to increase the uptake, but make it more efficient. And the report argues for and looks at options and opportunities in a range of areas to ensure that the uptake of inputs is increased, but it’s done in a more sustainable way, a more efficient way.

MA: The report also highlights a gap that exists between the availability of food and its difficult access by millions who cannot afford or trade it due to spiking food prices, poor infrastructures or high transport costs. How can such challenges be addressed by African countries that still depend on food imports and that have not done enough for rural and agricultural development?

SL: You’re absolutely right. One set of the challenge is about increasing agricultural production and increasing agricultural production. But in order for that food, that additional food, to benefit people they have to be able to access the food. And one of the challenges that we’ve seen in the past in many African countries has been a severe neglect of the rural areas, an under-investments in the type of rural infrastructure and market access that prevents people from accessing market and currently prevents, even in years of excess supply, prevents farmers from taking their products to serve the areas where there may be a deficit in the supply.

It is a bit of an irony, if you look at Africa as an aggregate, food production should actually be enough to feed everybody. So a large part of the challenge is about access, and going forward it will be critical that the target set by the African Union and by individual member states in Africa, of moving investments in agriculture up to 10 percent of their budgets, cover both the production side, but also ensures that the access side, the infrastructure, the storage facilities, the rural roads are also covered.

MA: Recent years have seen many African youths migrating from the rural to urban areas, seeking white collar jobs. What does this mean for agriculture? How do you think African countries can harness the potential, creativity, and entrepreneurial spirit of African youths towards agriculture and food security for all?

SL: It’s true that the youth are leaving agriculture in droves, and that’s a big problem, especially when you look at the population pressures that we talked about before. The share of youth in Africa is growing tremendously because the composition of the population is such that a greater share will be youth as we go forward.

Now this represents an enormous challenge in terms of making sure that opportunities are available for these youth. But it also represents an enormous opportunity. We’ve seen in the experience from both Asia and earlier Europe that having a large and growing share of youth in the population can be a demographic dividend, a real bonus in terms of economic growth and social development. But the key thing is to make sure that the growing numbers of youth have opportunities, and for this we argue that agriculture is actually part of the solution, but not in the way that agriculture is currently being promoted.

MA: Could you please explain the inter-relation between conflict, violence and food insecurity in Africa? How are they related? And how can effective conflict prevention and conflict management positively impact food security and human development?

SL: This is a very important question, and clearly conflict and food security are inter-related in a number of ways. I think in the most straightforward way if you think about once conflict sets in it has tremendous negative impacts in terms of disrupting agricultural production, in terms of moving people off the farm, and in terms of destroying the types of assets and resources that are needed in order to sustain agricultural production and sustain life in rural areas. In addition to production, access roads are often destroyed. The clinics and the services that are essential for transforming food into nutrition is also disrupted. So it’s really devastating in a whole host of ways.

On the other hand we also know that once, some of the studies that show, that we have included in the report show that rainfall variability is a very good predictor of the onset of conflict in as much as rainfall variability in rain-fed dependent communities determined the availability of food and economic activity, and once these communities are hit by rainfall shocks it triggers greater propensity for social uprising and conflict.

And so the link is in both directions and one of the key measures that is argued in the report in order to stem the growing pressures on food systems in Africa, conflict prevention is going to be critical. It’s normally not something you associate with food security and it goes to show which is really the spirit of this report is that food security is not just about, is not just about agriculture and it’s not just about nutrition, but it really is about the confluence of a whole host of development policies that need to come together. And without peace, without security there can’t be any development and there certainly can’t be food security.

MA: Finally, improved nutrition and increased food production and trade are important dimensions of food security that can benefit from empowering women. What more can be said to acknowledge the critical role women play in food security and ensure that they are adequately equipped with the resources, capacities and leadership opportunities to contribute to a food secure Africa?

Gender inequality is a denial of basic human rights and that’s really reason enough for why we should be concerned. But on top of this the report also shows how gender inequality is really bad economics in a sense that by limiting access of women to control over resources essential for food production, many societies are actually foregoing a potential tremendous benefit.

Some of the studies that are cited in the report show that if women were given equal access to education and access to credit and land and so forth, agricultural productivity could increase anywhere between twenty and up to forty percent. So while we should be concerned about gender inequality for, because it’s morally wrong, for a cash-strapped minister of finance there’s actually also a lot to be said for being concerned about equal access to and empowerment of women from a sort of more mundane, economic perspective.

MA: Thank you for this interview, Mr. Levine.