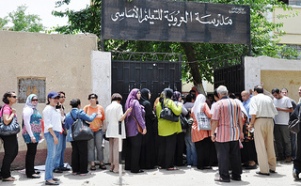 As Egyptians head to the polls, they may have reasons to be worried. The transitional authorities—the Supreme Council of the Armed Forces (SCAF)—have mishandled the democratic transition scandalously and have given citizens few reassurances. Furthermore, the members of the revolutionary bloc, who initiated and led the uprising against then-President Hosni Mubarak, are disheartened by the fact that their candidates have very little chance of making it to the final round of voting, let alone winning.

However, if we look at the situation more broadly, the very fact that the presidential elections are taking place, and that they will most likely be free and fair, is in itself a huge achievement. Voters might be concerned, but they are also fully engaged in the process.

The presidential elections are the real turning point of the transition. In many ways, what Egypt experienced in 2011 when Mubarak stepped down was really a military coup. The Army realized that history was on the side of the protesters; decided that Mubarak had to be removed; and moved in as the law of the land. The parliamentary elections at the end of 2011 were certainly important, but the new legislators have still been under the control of the SCAF and lack any real power. The presidential elections, however, will force the Army to hand over the reins of power to whoever wins, which will pave the way for real change.

In the most extreme scenario, the Army could, of course, decide not to give up control, but that is almost unthinkable, since it would cause another uprising. The generals have proven that they are sensitive to public opinion. One indication of this is the fact that they haven’t tried to suspend or delay the vote, despite fears in the preceding months that they would. The reason for this is not only that the Army has understood the level of opposition it might provoke, but also self-interest. Many argue that they dislike being in the limelight—especially given their very evident lack of managerial skills—and that their real interest is to return behind the curtains, where they can tend to their business interests unmolested.

In other words, the Army is maneuvering to return to the position they were in during the time of the previous regime. There is much discussion around a proposed constitution being drafted by the SCAF—most of it is speculation—but what is most certain is that the new charter would give them exclusive control over the military budget. It might also grant them veto power over the appointment of the Defense Minister. However, their capacity to impose a draft constitution is also very much in doubt.

The failure to draft a new charter before the presidential elections took place has been one of the main failings of the transition period. This has been primarily the fault of Parliament, since that was the main task it was elected to carry out. And while there are a number of sections that need to be revised urgently, there is one that is of particular importance with the presidential elections under way, and that is the definition of the relative powers of the Parliament and the president. This means that the new president won’t know what his role actually is, and that its definition will be open to influences by the military and other interested parties.

However, the relevance of this is relative and should not be exaggerated. The Parliament is currently under the control of the Freedom and Justice Party (FJP), the political arm of the Muslim Brotherhood, and they have a good chance of also winning the presidential elections. So the worse possible outcome is that the FJP decides between a presidential system and a parliamentary system—in fact they have already expressed predilection for the latter. In the event that a non-Muslim Brotherhood candidate wins, there will be a tug of war between the president and the Parliament, which would probably be healthier and bring about more balanced policies.

But more importantly, the failure to draft the constitution before presidential elections guarantees that the text will not be revised while the SCAF is in power. This was in fact a major concern of some critics when the schedule for the transition was being decided, shortly after the fall of Mubarak, and so it can actually be seen as a success.

With the exception of the disqualification of a number of candidates in seemingly arbitrary court rulings, the run-up to the elections has been impressive. The candidates have carried out real campaigning, travelling throughout the country in whirlwind visits. The recent televised presidential debate between the former Egyptian Foreign Minister Amr Moussa and the self-styled liberal Islamist Abdel Moneim Abul Futuh—a first for Egypt and only the second for the Arab world—was watched by millions in and out of Egypt with bated breath. Opinion polls show that in general there is a high level of trust in the transparency of the process and even international observers have been invited. So we can realistically expect no more shameful ballot stuffing or intimidation of voters, which was a trademark of the previous regime.

Thus, the election process itself marks a radical break with the past and is something to celebrate. The fact that in all likelihood it will also pave the way for the military to give up executive authority is a good indication that the former regime and the way it did business is being relegated, and, fifteen months after the ousting of Mubarak, we might be finally talking about a revolution.

About the photo: Men and women voting at the presidential elections in Cairo, 23 May 2012. (UN Women/Fatma El Zahraa Yassin)