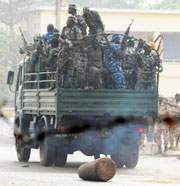 On April 12, 2012, Guinea Bissau experienced another coup d’état, its second in two years. This came as part of a wave of coups and unconstitutional changes of government that rocked West Africa: Mauritania in August 2008, Guinea in December 2008, Guinea-Bissau in March 2009, and Niger in March 2010. The coup in Mali in March 2012 took the international community by surprise because Mali has been a model of democracy in the region with a continuous democracy for two decades.

In all of these coups and unconstitutional changes of government, the Economic Community of West African States (ECOWAS) swiftly condemned them and imposed sanctions (except in the case of Mauritania, which had pulled out of ECOWAS in December 2000). Despite sanctions by ECOWAS, undemocratic changes of government in West Africa seem to be the norm rather than the exception. These events question the ability of ECOWAS to deal effectively with these complexities. Disaffections with the leadership style of ECOWAS has seen the move by a sub-regional organization, the West African Economic and Monetary Union, to create a security commission to deal with the security challenges facing the francophone countries. An analysis of this emerging issue is important because of its many negative implications for peace and stability in the region.

On the surface, ECOWAS seems to be responding swiftly to these changes in the region. Nevertheless, unconstitutional changes of government in West Africa are a symptom of deeply imbedded problems, such as lack of economic opportunities, youth unrest, organized crimes, piracy, endemic corruption that could paralyze state apparatuses, and more spending on military armaments than public spending for basic services.

For ECOWAS to be seen as responsive, it needs to move from the rhetoric of “swift” sanctions to the actual encouragement and nudging of its ruling elites to respect the rule of law, protect human rights, provide avenues for economic growth in their respective countries, actively nip corruption in the bud, and observe democratic principles, such as the imposition of term limits on serving presidents. No doubt, this is a re-awakening call for ECOWAS to pause, reflect, reinvent itself, and come up with relevant solutions as a regional organization to solve the myriad security issues confronting the region. Otherwise, it could lose relevance in the region and further alienate its francophone members.

The trajectories of coups in West Africa are not the same; for instance, in Guinea Bissau, no president has ever completed a full term since the country gained independence in 1974. On the other hand, is Mali, which had an established democracy before the coup. Reasons for the toppling of the governments in the region were poor economic conditions, endemic corruption, interference of the military in political matters in the case of Guinea Bissau and absence of institutional reforms.

Therefore, a critical question to ask is: why are coups pervasive in the West African region, despite ECOWAS’ imposition of sanctions on the affected countries?

The answer lies in the fact that ECOWAS has largely ignored the actions of sitting presidents that might not be in tune with the needs and aspirations of their citizenry, and has only reacted when there is an unconstitutional change of government by “swiftly” imposing sanctions. This seems to support the argument of some people that regional organizations in Africa protect the incumbents in democratic states, even if they have anti-democratic tendencies.

The frequency of coups in West Africa also reflects the absence of inclusive democracy and good governance in member states. This is evidence of non-adherence to the norms and principles of ECOWAS that normally would have strengthened the political legitimacy and institutional authority of ECOWAS in governance matters. Over the years, there has been increasing fragmentation of political authorities between the francophone- and anglophone-member countries in the region, which was recently demonstrated in the diplomatic intervention of Burkina Faso–a francophone country–in facilitating the resignation of the deposed president in Mali, which was a key requirement for negotiations with the military junta.

This also reveals a divergence in the course of action to be taken in the event of political crises in member states. Nigeria, who is the powerhouse of ECOWAS, favors military intervention as a solution to all political crises, while the francophone countries prefer subtle diplomacy. Furthermore, the insecurity of the ruling elites in the region and their quest for survival, which increases their focus on self-preservation with the resulting manipulation of constitutions and electoral laws, tends to heat up the polity and provide incentives for the military to carry out mutiny. ECOWAS needs to deal decisively with this in an inclusive and comprehensive manner.

Past events in the region show the need for a firm oversight of the security sector—which requires the transformation of existing security governance arrangements—in order for sustainable development, democracy, and peace to become entrenched in the region. Most times, the buck usually falls on the table of ECOWAS as a regional institution. However, opportunities abound for ECOWAS to confront the structural causes of coups and enhance democratic culture in the region.

Ayodele Akenroye is a PhD Candidate in Law at McGill University in Montreal, Canada.