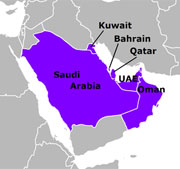 However, another of the main characteristics of the revolts is that they have been largely leaderless. This was a strength when the regimes they toppled tried to clamp down on them, but it is now a weakness during this process of transition. And this is where regional institutions could provide leadership for a more stable and prosperous Middle East. As multilateral forums, they could also help enhancing trust and cooperation among their member states.

Whether out of necessity or foresight, the Gulf Cooperation Council (GCC) has made bold attempts to redefine itself in reaction to the developments in the region. However, rather than act as facilitator for the wider region, it has instead attempted to shield itself from the instability across the region that the Arab uprisings have caused.

First, the organization opted to create an alliance of monarchies and reached out to Jordan and Morocco. The profound differences in socioeconomic levels and structures—not to mention the thousands of kilometers which separate Morocco from the Persian Gulf—made the GCC backtrack almost as soon as it had made the proposal public. As partial reparation, the Gulf countries are now promising millions of dollars in aid to both Morocco and Jordan.

The most recent attempt of transformation has been an effort for the GCC to turn inwards—perhaps in reaction to its failed attempt at expansion—and strengthen the bonds between the existing members. The proposal is to create a union along the lines of the European Union.

Prima facie, it is not an outlandish project. The Gulf countries have many things in common, which is a good starting point for any organization. They have a similar social structure and common cultural references. They are oil-based economies, and, in the security realm, they share an age-old concern: Iran.

Tension has increased considerably in the Persian Gulf recently, with Iran threatening to close the Straits of Hormuz, and thereby disrupting the flow of oil, which would cause major disruptions globally. As Iran feels the pain of ever tightening sanctions, it releases its frustration by pushing its weight around in the Gulf. Another example of this was the high-profile visit last month by Iranian president Mahmoud Ahmadinejad to the island of Abu Musa, which the UAE claims as its own. Some expect more of these taunts as negotiations proceed over Iran’s nuclear program and to compensate for possible concessions in that front. For the GCC, of course, these threats are taken very seriously, and are not seen in isolation, but as part of a sustained campaign by Iran to exert its influence in the region. It is against this background which the call for a union must also be measured.

However, at the GCC summit in Riyadh on May 14, 2012, where the major proponents of the plan—Saudi Arabia and Bahrain—were hoping for a breakthrough, they instead agreed to create a special committee to further study the issue of forming a union, which in turn would culminate in a summit to take place at an unspecified date. This is diplomatic speak for “shelving.”

It seems, in fact, that, despite the interest of the Gulf countries to join hands— and there is a very real need to have a regional organization that channels the chaotic energy of the uprisings in the right direction—the objective conditions for a union are not there yet. There are numerous unresolved border issues, both inland and at sea, between each of these countries. Saudi Arabia has a conflict with the UAE over the Sheba oil fields; with Oman over the Buraimi oasis; and with Kuwait over its maritime border.

But the real problem between these countries is that, despite all they have in common, there are differences that would make a union very difficult, which can be illustrated by a couple of simple measurements. Saudi Arabia is by far the largest country in the area. It has a population of 27.5 million; the next Gulf country in size is Oman, with 2.8 million (Kuwait has a similar number of inhabitants). In land mass, the Saudi kingdom has about 2.15 million square kilometers; again, Oman is the second largest, with slightly more than 300,000 square kilometers. The next countries in line are a fraction of that, in number of inhabitants and dimensions. Qatar has a population of 1.4 million and a land mass of some 11,500 square kilometers.

In other words, the other Gulf countries are concerned about being swallowed up by Saudi Arabia, which has proposals for a common currency with the central bank in its territory and ideas on how to influence foreign policy; also, their population could flood the area under a Schengen-type agreement. Furthermore, this proposal comes at a time when some of the member countries are thriving, in particular Qatar, which is at its peak in terms of regional and global influence.

It is easy to belittle the importance of the GCC. True, it was created in 1981 and is the product of a particular historical juncture: the need to confront Iran in the aftermath of the 1979 revolution. And since then, there have been few concrete achievements —the role played by the GCC in mediating the transition in Yemen since last year is a prominent exception and an example of what the organization is capable of.

But it is certainly more than the sum of its parts. Its strength lies at a more incommensurable diplomatic realm, like presenting a common front when necessary; providing a forum for resolving internal disputes; and leading practical projects, like the creation of a regional power grid. A union, however, is a long way from being achieved.