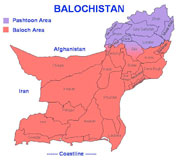 While international attention on Pakistan’s security challenges focused mostly on the north and its role in the Afghan conflict, the issues outlined above have manifested in Balochistan for much longer. As the province now gains geopolitical importance, more attention is now being given to the separatist insurgency in the province.

The Baloch separatist movement in Pakistan is occurring in a changing geopolitical context that will see Balochistan’s strategic value increase for regional and international powers. This creates incentives for a number of actors to support various insurgents, or state forces to pursue their ends. Such pursuits however would be short-sighted, create long-term instability, and, most importantly, do little to address the grievances of the Baloch people.

The movement and grievances stem from a historically distrustful relationship with the Pakistani government, and are political in nature. Thus, addressing the issues requires a genuine political process rather than armed suppression or insurrection. The international community, with little direct involvement in this, should continue to support and strengthen Pakistan’s evolving democratic, civilian institutions, including greater accountability for human rights abuses.

Though there now seems to be a vague consensus in Pakistan’s civilian political leadership and civil society that the Balochistan issue must be addressed through dialogue, the ultimate arbiters are still the security agencies, and the situation is close to a “point of no return.”

Balochistan has important geostrategic and economic value for Pakistan, the region, and for international actors. The province is Pakistan’s largest by size (43 percent of land area), and smallest by population (13 million out of 192 million). It shares borders with Iran and has one of the two land crossings into Afghanistan at Chaman, serving as an important supply route for NATO forces as well as Afghan insurgent groups. Cultural links across the border are also strong, which has allowed many Afghan insurgents to find refuge in Balochistan. The province is also rich in resources–natural gas and minerals, including some of the world’s largest copper reserves. The newly-developed deepwater port in Gwadar, financed by China, has enormous economic potential to become a regional trading hub and land route to Central Asia and China.

The Baloch insurgency can be characterized as an ethno-nationalist separatist movement that has various civil and political groups as well as armed elements. The movement is ultimately rooted in a historically-complicated tense relationship with the Pakistani state. The current insurgency has intensified since the killing of tribal chief Akbar Bugti in a military operation in 2006, but is the fifth such movement since 1947. The last one, in the 1970s, was militarily defeated by Pakistan and Iran using 80,000 troops. Whereas previous insurgencies have been driven largely by certain Baloch tribes, particularly their often-autocratic leaders (the Sardars), this particular one encompasses a number of tribal chiefs who previously wanted to remain within Pakistan, as well as importantly, a new rising Baloch urban middle class, including a large student movement, who reject tribal leadership and traditional social structures. As such, the multiple armed and civil groups are not unified or coordinated under a single leadership, but a common goal of separation.

Baloch resentment towards Pakistan is driven by a number of grievances. The over-centralization of power with federal authorities, along with under-representation of Baloch voices in state institutions has bred long-standing resentment, going back to the contested accession of the province into Pakistan in 1948. Today, the province is Pakistan’s most underdeveloped region, with 45 percent of the population living below the poverty line. Of the $1.4 billion in annual natural gas revenues, Balochistan gets just $116 million in royalties. Many villages in gas-producing regions are still not connected to the energy grid. The military government of Pervez Musharraf invested heavily in the province, arguing that economic development would help break the stranglehold of the Sardars on the people. Such projects, however, breed their own resentment, as the Baloch have little access to their benefits. Low levels of human development in the province means that many high-skill jobs are filled by non-Baloch, often migrants. Thus, the nationalists see them as exploiting and stealing Baloch wealth.

This migration also ties into the complex demographic mix of the province and nationalist fears of upsetting that balance. Due to colonial boundaries that included many Pashtun areas as part of Balochistan, it’s estimated that ethnic Baloch constitute a very small majority in the province. Other estimates say that Baloch and Pashtun now number around 45 percent each. The ire of the Baloch insurgents, however, seems mostly directed at ethnic Punjabi and Urdu-speakers, who are seen as part of the “Pakistani occupation.” These groups—some of whom are recent migrants, but many of whom have lived in Balochistan for generations—have now become targets. The Human Rights Commission of Pakistan estimates that around 800 “settlers” have been killed since 2006 by insurgent attacks. Additionally, last year, militant attacks killed 218 Pakistan security personnel in addition to 102 attacks on gas pipelines and railways.

Perhaps fueling the current nationalist sympathies the most is the heavy-handed crackdown by the Pakistani security agencies—particularly by the Frontier Corps paramilitary—who see the movement as driven by tribal chiefs interested in self-enrichment rather than self-determination of their people. Human rights abuses, enforced disappearances and “kill-and-dump” operations, where activists’ bodies are found bearing torture marks (231 were found in 2011 by roadsides), have been attributed by rights groups to the security agencies, though they are officially denied. Human Rights Watch reported that as many as 6,000 people have gone missing since 2003, while official government figures put the number at 47. The missing and killed are not limited to suspected insurgents, but include many intellectuals, political activists, and youth organizers supporting the nationalist cause.

The crisis in Balochistan has gained national attention in Pakistan in the past few years, with all the major political parties advocating that Baloch grievances must be addressed and impunity of the security agencies must end. The Supreme Court has taken up the cause of missing persons. Though reporting on the story can still be dangerous, Balochistan is no longer the taboo it once was. Civil society and human rights groups’ concerns, long ignored, are now also increasingly highlighted. Since 2008, the new civilian government has significantly increased Balochistan’s share of federal revenue transfers and devolved many administrative powers to the provincial government as part of its wider reforms, and also passed a special “rights package” for Balochistan. It has also recently offered amnesty to armed rebels and their leaders.

Poor governance, however, has led to poor implementation of these measures, and strengthened the military in setting law-and-order policy. Amnesty promises in the past have been broken. Further, the perception remains that the ultimate decisionmakers on Balochistan are not the civilians but the military establishment. With hardening views in the nationalist movement, this outreach has had limited traction and been rejected. Continuing human rights abuses and violence have led gloomier analysts to conclude that the situation may have reached a point of no return, though others say that most Baloch can still be persuaded to want to remain within Pakistan.

As violence increases, the emerging geopolitical context creates incentives for a number of external actors to pursue their interests through supporting one or another armed group, while looking the other way on rights abuses. Balochistan is already a sore point in relations between Pakistan and its neighbors, and such policies in the long-run will fuel the instability in the province, which could add to the already-destabilizing mix in the region. Most importantly, they will do little to address the grievances of the people or improve their lives if they become subject to manipulation in regional realpolitik, as seen in Afghanistan.

The grievances of the Baloch are political and thus can only be addressed through a political process, not suppressed coercively or manipulated. The primary responsibility for facilitating this political process falls on Pakistani state institutions themselves, beginning with ending human rights abuses and establishing accountability for all its organs, civilian and military. Similarly, Baloch insurgents must also refrain from armed violence against civilians and follow the path of nonviolent, civil and political activists. Such a shift will be a part of the larger reorientation required in Pakistan from a centralized, national security, military-dominated state to a civilian-led, developmental, federal state where political negotiations—often-messy and complicated—dominate, and grievances are worked out through compromise.

This process is in its nascent stages at the moment, but is occurring. The international community has thus far not been involved and has little leverage in directly affecting the Balochistan situation. It should demand more accountability of security services and prevent covert support to armed insurgent groups. Most of all, it should continue to support and build the evolving democratic civilian institutions in Pakistan, weak and self-interested-at-times as they seem.

Muneeb Ansari is a Research Assistant at the International Peace Institute and tweets at @ansarim.

About the photo: We found the map here