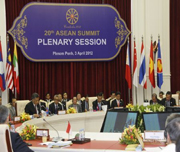 Ten prime ministers and presidents representing the members of the Association of Southeast Asian Nations (ASEAN) met in Phnom Penh, Cambodia last week. The meeting came just days after the first successful democratic elections in Myanmar in decades, and while a high-stakes dispute over territorial claims in the South China Sea was still brewing. All this was set against the background of near-financial meltdowns in the Eurozone. Even so, the summit was limited in its outcomes.

Although regional cooperation needs still to be boosted in the region, ASEAN has established itself as an indispensable political framework in the Southeast Asia region in recent years.

Its potential was highlighted by the success of its careful diplomacy in support of the transition in Myanmar and the recent agreement with China, Japan, and Korea under the ASEAN+3 framework on a strengthened mechanism to counter liquidity crises among its members. Yet more intractable and contentious issues, such as the Thailand-Cambodia border dispute and the South China Sea dispute, have revealed the limitations of ASEAN as an effective decision-making forum.

Under the chairmanship of Cambodian Prime Minister Hun Sen, ASEAN leaders met in Phnom Penh, Cambodia last week for the 20th annual ASEAN Summit under the general theme “ASEAN: One Community, One Destiny.” The summit also marked the 45th anniversary of ASEAN’s existence.

Myanmar figured prominently in the ASEAN summit and is seen as a success story. The country, which is the designated chair of ASEAN in 2014, has been a point of contention in the past. Besides lacking in development, it was also the least democratic country among ASEAN nations, and the military junta had a decades-long history of human rights abuses. However, with the recent reforms and successful by-elections that took place just days before the summit, progress could at last be shown. ASEAN’s long-standing policy of engagement with the leadership in Myanmar could be portrayed to have been working.

The developments in Myanmar continue to impress (the Global Observatory wrote about the surprising pace of reforms in January). Aung San Suu Kyi’s National League for Democracy (NLD) won 43 out of the 44 seats it contested, out of the 45 seats in Parliament up for election on April 1. The NLD’s victory has been endorsed and welcomed by Myanmar’s President Thein Sein; ASEAN also welcomed the results, and called for a lifting of international sanctions on Myanmar.

ASEAN is not alone in recognizing the progress, which has been achieved in just a year of Thein Sein’s reign. The US and other Western governments are reviewing their sanctions regimes. Indeed, this is widely seen as necessary in order to further support the reformers in Myanmar and to enable maximum momentum for reforms to unfold. Thant Myint-U, a historian and frequent commentator on Myanmar, has argued that in order to not miss this unique window of opportunity, Myanmar must be given access to international trade and markets beyond China, India, and Thailand.

However, it will be crucial for both ASEAN and also the wider international community not to lose sight of the many problems that persist in Myanmar. A significant number of political prisoners remain incarcerated, and even though some successes have been achieved in alleviating the decades-old ethnic conflicts around Myanmar – notably, Myanmar’s government is closing in on a ceasefire agreement with the rebels of the Karen National Union forces – fighting has raged on with renewed intensity in Kachin state. Aside from substantive hurdles, ASEAN and other international partners should redouble their efforts to build Myanmar’s domestic capacity, as even the best intentions to leapfrog in political freedoms, human rights, and development require a minimum infrastructure to absorb the changes.

The second big topic in Phnom Penh was the South China Sea. The overarching challenge is reconciling the bilateral relationships of ASEAN member states with China with finding a common ASEAN position on how to address the South China Sea issue. As was reported in the Global Observatory, four ASEAN members (Brunei, Malaysia, the Philippines, Vietnam) claim parts of the South China Sea and thus collide with the territorial claims of China and Taiwan, who claim it almost in its entirety.

Those ASEAN countries that have major territorial claims at stake – particularly the Philippines and Vietnam – are keen on getting ASEAN to sign off on a common position for a new Code of Conduct (CoC) for the South China Sea before entering into negotiations with China. Other countries, concerned with not antagonizing and sidelining China, argue in favor of involving China as the ultimate co-signatory in the drafting process from the beginning. Indonesia’s Foreign Minister, Marty Natalegawa, has argued that while a unified ASEAN position on the CoC is a matter of principle, it is also not realistic to leave China completely in the dark in the process.

Thus, even though the merits of greater coherence on how to approach the topic of the South China Sea are widely appreciated, actually aligning the foreign policies of ten member states on this contentious issue have yet proven futile.

And there were other disagreements as well. Timor Leste is trying to join ASEAN, with the full support of the government of Indonesia, but others, notably Singapore, still have doubts. The main concerns revolve around a still-volatile security situation in Timor-Leste. As recently as 2006, Australian troops and UN peacekeepers had to be re-deployed to deal with renewed outbreaks of violence after the country had been believed to have stabilized already.

Finally, the summit reaffirmed the ASEAN members’ commitment to achieve economic integration by 2015. The experience of the European Union, inevitably, looms large during these discussions. This year, however, against the background of Europe’s troubles, ASEAN Secretary-General Surin Pitsuwan struck a more confident tone: “In 1997, the EU told us ‘put your house in order.’ This time, we appeal to Europe: put your house in order.”

Indeed, the experience of Europe in the last two years, as well as the ASEAN countries’ own difficult experiences in 1997 and 1998, serve as a motivation to avoid a similar scenario in the future. In the lead-up to the summit, ASEAN and its three powerhouse economic neighbors —China, Japan, and Korea (jointly referred to as the ASEAN+3)—have agreed to double the funds of the Chiang Mai Initiative Multilateralization (CMIM) from $120 billion to $240 billion. The system, set up in 2002, is intended to enable the region to collectively respond to short-term liquidity crises among its members.

On balance, therefore, ASEAN may not be as far in the development of its institutions and the level of cooperation of its members as the EU, for example, but it clearly has some successes to show for, such as the progress in Myanmar and the efforts to develop collective safeguards for currency crises. ASEAN’s path to integration is fraught with many obstacles and difficulties concerning how closely to integrate and align foreign policies, which countries to admit, and how to integrate its markets.

Till Papenfuss is a Policy Analyst at the International Peace Institute. He can be followed on Twitter at @tijopa