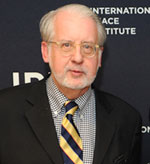 Paulo Sergio Pinheiro is chair of the UN Human Rights Council Independent Commission of Inquiry on Syria 2011-2012. The commission’s 72-page report, released at the end of February, concluded that Syrian government forces had committed “widespread, systematic, and gross human rights violations amounting to crimes against humanity.” A presidential statement adopted by the Security Council on March 21 came to the same conclusions.

In this interview, Mr. Pinheiro discusses the results of the report and addresses concerns that it was completed without any commission member setting foot inside Syria. He confirms that those in Syria responsible for crimes against humanity and other gross human rights violations are being documented, though he says that list of names is literally under lock and key. “There are only two copies that are in sealed envelopes in a safe with two locks, with different people, like in a bank when the safe can only be opened with two keys,” he says.

Mr. Pinheiro, a long-time Brazilian diplomat and legal scholar, also discusses the role of member states in this crisis and what the future holds for his commission’s mandate.

Warren Hoge (WH): I’m here with Paulo Sergio Pinheiro who is the chairperson of the UN Human Rights Council Independent International Commission of Inquiry on Syria 2011-2012.

Paulo, your commission published a report at the end of February that drew tremendous attention, because it concluded that Syrian government forces had committed “widespread, systematic, and gross human rights violations amounting to crimes against humanity.” It was a 72-page report, and it was compiled even though you were not able to go into Syria itself because the government would not let you in. Let me ask you this: why should we believe this report if you were unable to go into Syria to investigate it?

Paulo Sergio Pinheiro (PSP): I think first I must say that I have participated in other mandates that I was not able to go to the country. Myanmar during eight years; Venezuela, seven years when I was rapporteur of the Inter-American Commission of Human Rights, and President Chavez never let me into Venezuela.

But of course, the fact that you have no access does not mean that you will not have information. I must even say that in many of my missions in countries I am always—and my colleagues—very prudent, very cautious not to expose victims. What you get from meeting the victims, it’s impressive in terms of impact on your emotions, etc., but the hard data, the hard information… you can have this by other means, indirect contacts, etc.

And what we managed to get, it was true information from Syrians abroad, not only people in opposition to the government, common people that decided to leave the country. Let’s not forget that the UN is there in Syria. There, we have first-hand information through the UN system, and sometimes people forget this.

Besides this, we had interviews by Skype. I don’t understand that the government is not able to censor Skype—that’s a great thing. Also, we don’t have yet a satellite like George Clooney, but we used a lot of satellite imagery.

Of course we are frustrated of not having access, but this doesn’t mean that we have not been able to prepare an honest, comprehensive picture of the situation in the country.

WH: Paulo, your commission compiled a list of particular individuals, including commanding officers and officials at the highest levels of government, responsible for crimes against humanity and other gross human rights violations. What has happened to that list? Are there copies of that list? Will we know what the names are on that list?

PSP: This was our mandate. We did not invent that. The Human Rights Council —that is, its 53 members of the Council —requested us to do that. We have not published the names because I think that would be irresponsible. It would consist of a de facto indictment, and we don’t have this juridical capacity, we are not a criminal investigative body.

At the end we prepared two lists, based on all the evidence we have collected. Two lists of people in charge of the operations. The very repeated similar configurations of operations in many confrontations with the civilian population or the Syrian Free Army, the armed rebels, and also units where gross human rights violations such as torture have been practiced. In the end, we destroyed all the hard copies, and of course all of our team, they are under the obligation of confidentiality clause.

I must say that is only one or two of the people in the team besides us perhaps have some idea of this list. But we have deleted all electronic files and also the hard copies. Now there are only two copies that are in sealed envelopes in a safe with two locks, with different people like in a bank when the safe can only be opened with two keys. We don’t know who are those people —the High Commissioner does not know. The High Commissioner has not seen the list, and we will not publish this list.

This list could be used in the future for competent institutions with judicial capacity to deal with that, able to guarantee the protection of the witnesses, with credibility and with confidentiality. We have not mentioned what institutions can do this; this is very much the decision of others, not our commission, or even the High Commission. It is not the High Commissioner that will choose. The High Commissioner will be able—we said this in Article 87, under some conditions, she can open this list to a specific body.

WH: The Syrian government says that this is not an internal insurgency, an internal insurrection, and internal rebellion. Instead, it says the people who are being attacked by government forces are terrorist armed gangs from the outside. In doing your report and your investigations, did you ask the government for evidence to support that theory? And if you did, did they have such evidence?

PSP: No. A hundred times I think we have asked, or in writing, in meetings, that they give us some indications or some evidence about this nature of terrorist groups, foreign groups acting inside Syria. I think that this is a very conspiratorial approach. The Syrian Free Army as defectors of the armed forces and the armed groups are common citizens in arms. I’d say sort of partisans, the guys that tried to protect the community or their neighborhoods. It’s not organized, it’s not a network of combatants.

On the other hand, unhappily, we have reports that elements, individuals from abroad, are fighting in Syria. But these are not the main… the people that the government is fighting are indigenous individuals. But, of course, there are reports of presence of foreign combatants. This is really a very big danger.

WH: We are having this conversation on Wednesday March 21st. I say that because this morning the Security Council adopted a presidential statement, which, in effect, supports the mission of Kofi Annan, the joint representative of the Arab League and of the United Nations for Syria. My question is—it’s two questions really—the first question is, are you still going to continue seeking entry to Syria as you continue your investigation? Secondly, is there anything specific in this statement today that is going to make your task easier?

PSP: Yes, we will continue requesting, giving justification for our access to the country.

Second, even if the presidential statement does not refer to our commission or to access to Syria, there is a full coincidence with the conclusions of our report. I must say even the same language. We have circulated this report one month ago, on February 23. That is, questions against militarization, the suspension of armed activity, the humanitarian access, dialogue, these are very much the same points.

Then of course, we have a great joy, this is a day that we rejoice, and not only because of this coincidence with what were our conclusions in the report but also because the Security Council has demonstrated a unity. That is, there is no more this division, some members that are protecting the government, others are protecting the opposition. I think it’s a great moment of unity at the Security Council.

WH: Finally, this impasse right now which even the Secretary-General said today really threatens to go much wider and involve broad regions in the world. What should the international community, or individual countries outside of Syria, be doing to bring it to some resolution? And what should they not be doing?

PSP: First, I am not an advisor of states, but to answer your question, what they should not be doing is to use expressions that all the options are on the table. I hate this expression, I must tell you. I think that is very much un-Brazilian, “all the options,” meaning that the military option is one of the options on the table. I think this is unacceptable in the case of Syria. I think we have to put aside any intention of military foreign intervention.

What the states, they are supposed to do, towards perhaps resolutions to continue the effort that was done? Not to consider the Chinese or the Russian position as intransigence. The Chinese and the Russian position— they have another perspective of the situation. I think the other members of the Council, the other P5 members, are supposed to do is build a common ground where what was achieved today in the presidential statement could perhaps be translated in an effective resolution.

PSP: It seems there will be a resolution by the Human Rights Council extending the mandate of the commission until September 2012, asking us to present an update report on the next Human Rights Council in June, and then a report in September. Then we will continue to do in principle what we are doing in terms of documenting, registering human rights violations. But perhaps we will try to map with more effectiveness to identify these violations all over the territory and not just consider the cities.

That is, if I can say, I am happy with this extension, because we have accumulated so much experience, and the team that will continue, they have now so much knowledge that it will be a pity that this will be interrupted in the middle of this ongoing process.

WH: Paulo Sergio Pinheiro, thank you very much for talking to the Global Observatory.

PSP: Thank you, it was a pleasure.