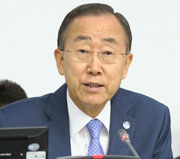 While announcing his five-year action agenda on January 25th, United Nations Secretary-General Ban Ki-moon indicated his support for the creation of a new position of UN counterterrorism coordinator. The idea had been previously presented in the Security Council by the United States. Supporters argue that a UN counterterrorism “czar” would improve coordinated implementation of the General Assembly’s Global Counter-Terrorism Strategy, and help ensure that the more than 30 UN bodies involved in counterterrorism are singing from the same song sheet.

Improved coordination is also seen by some states as necessary if the UN is to develop a broader approach to multilateral counterterrorism, focusing less on responsive, military- and law enforcement–based approaches and more on prevention, which would better leverage the UN’s social, political, and economic capacities. At the Secretary-General’s High-Level Symposium on International Counter-Terrorism Cooperation held in New York this past September, member states emphasized the need to develop a broader preventive approach. But states disagreed on what mandate the role should involve, where it should be located, and how it should be financed.

A new report published by the Center on Global Counterterrorism Cooperation points to three possible solutions, providing costs: 1) a UN counter-terrorism coordinator, grafted onto the existing structures; 2) a special representative of the Secretary-General for counter-terrorism; and 3) a new Under Secretary-General position for transnational threats. It also discusses at length the various roles any coordinator might play, identifying areas of comparative advantage in multilateral counterterrorism that the UN could better exploit.

The report, Reshaping United Nations Counterterrorism Efforts: Blue-Sky Thinking for Global Counterterrorism Cooperation 10 Years After 9/11, was developed through a year of desk research, consultations with member states and UN officials, and almost 100 interviews. (Full disclosure: I was a co-author, together with Alistair Millar, David Cortright, and Peter Romaniuk.)

The report identifies four areas of potential comparative advantage for the UN in global counterterrorism efforts: (1) as a strategic leader, including a norm-setting role; (2) as a convener; (3) as a capacity builder and facilitator of others’ capacity-building efforts; and (4) as a monitor.

Based on these comparative advantages, the report presents 22 recommendations for changes to the way the UN counterterrorism effort operates, including:

• creating a broader movement against terrorism, involving not only states but also a range of other actors;

• strengthening engagement in the field and at UN headquarters with human rights experts and civil society;

The report presents the creation of a single coordinator position as a step towards reshaping the UN’s counterterrorism arrangements in these directions. It argues that there will be a greater need for UN leadership on terrorism and transnational threats in the future, as the shift toward “prevention” prioritizes soft power rather than hard power and civilian rather than military efforts. Now that the Secretary-General has called for “consideration by intergovernmental bodies of creating a single UN counter-terrorism coordinator,” the center’s report provides details to inform those considerations by outlining what the functions of that coordinator position should include, as well as detailed costs.

The report finds that the current UN set-up does not allow it to fully exploit its comparative advantages. The creation of a coordinating position will allow for increased engagement by senior UN leadership to drive forward integration among different agencies’ counterterrorism-related efforts at the operational level and to create the political momentum that will make that integration self-sustaining within the UN bureaucracy.

The report argues that it will allow the UN to better use its bully pulpit and convening power to promote respect for human rights while countering terrorism, broaden the movement of actors engaged in counterterrorism, and better understand the connections between terrorism and other transnational threats such as drug trafficking and organized crime.

The report also highlights a number of other areas where improved leadership and guidance may be needed within the UN system. High on this list is how and when UN actors should engage with groups that member states – or even the Security Council – have characterized as supporting terrorism. The report identifies a tension within the UN system between the UN’s role in identifying, denouncing, and taking action against unlawful terrorist activity and its development, human rights promotion, conflict prevention, mediation, and humanitarian assistance goals. It calls for senior UN leaders to develop and provide guidance to operational levels on these issues, and sees this as the kind of consensus-building exercise in which a new UN coordinator might provide leadership.

The report also presents the creation of a UN CT coordinator position as the first step in a larger process of leveraging the UN’s convening power to build a global movement against terrorism. It argues that much more needs to be done to exploit the United Nations’ capacity to engage civil society, and suggests the creation of a civil society advisory committee to provide informal research and policy inputs to the work of the CTITF, as occurs on issues such as children in armed conflict. It also canvases reforming the two-yearly General Assembly review of the Global Counter-Terrorism Strategy – a process it describes as moribund – and turning it into an international meeting on counter-terrorism, bringing together states and civil society following the model of the review conferences of the Treaty on the Non-Proliferation of Nuclear Weapons (NPT). The new coordinator position would play a key role in such reform.

Another area the report emphasizes is the need for the United Nations to make more of its field presence to prevent terrorism. Recent analysis of UN political missions suggests an alarming absence of knowledge and understanding within field missions on existing UN approaches to transnational threats (see this report). The report offers a series of suggestions about how the United Nations could better connect its headquarters decision-making to its field presence in this area, including the use of counterterrorism officers or transnational threat analysts in field missions, the involvement of UNODC in mission planning and analytical work for the Security Council, and training and guidance for senior decision-makers.