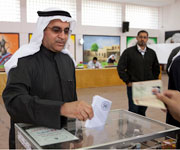 Kuwaiti citizens went to the polls on February 2 with hope for some long-awaited political, economic, and social reform. In December 2011, the Emir of Kuwait Sheikh Sabah Al-Ahmad Al-Jaber Al-Sabah dissolved Parliament following public protests that called for a parliamentary investigation of the Prime Minister, Sheikh Nasser Al-Sabah, after accusations of corruption and bribery surfaced.

The elections resulted in the historic and unexpected win by the opposition—mainly composed of Islamists—who now have 34 seats out of 50 in the Parliament.

The results from the February 2 polls strengthened the opposition, producing a Parliament with a mix of Sunni and Shia Islamists, tribal representation, and, this time around, no women. Sectarian, tribal and political differences both between the royal family leadership and the Parliament and within the Parliament itself mean polarization and gridlock. As votes seemed to have been cast along identity groups, the Parliament will be riddled with political quarrels, entrenchments, and divisions, which will hardly produce the expected and needed reforms.

All of the 23 female candidates failed to be elected, including four members of the former Parliament. Three of them were likely damaged politically by their support for the former government.

Kuwait is a constitutional monarchy and has the oldest directly-elected Parliament among the Arab Gulf states. Although the Emir maintains the final word on most government policies, the National Assembly plays a real role in decision making, with powers to initiate legislation, question government ministers, and express lack of confidence in individual ministers. In fact, it was a Parliament investigation of reports of bribery among its members by the Prime Minister (a member of the royal family) and other cabinet members that pushed the Emir to call early parliamentary elections late last year.

Public frustration with the current system led to unprecedented street protests, which the opposition strongly supported, advocating for political reforms, including the right to form political parties, electing the prime minister, and independence of the Parliament from the government. These protests were translated in more votes for the opposition, which is now demanding nine ministerial positions within the new government.

During the February 2 elections, people voted along tribal and sectarian lines, possibly as a reaction to the power abuses and corruption, minimal political reforms, monopolized markets, and weak rule of law, as tribes and other sects in society have perceived the government as holding double standards when it comes to law enforcement. Since the new Parliament is strongly divided mainly along these lines, and includes hardliners not inclined to compromises, a deadlock between the Parliament and the government is expected.

Some believe that reform of the electoral law is required. The current electoral law does not permit parties to run. Instead, only individuals are allowed to stand for election, which can magnify tribal and sectarian tendencies. With political parties representing a broad set of ideals and beliefs, politics might be more inclusive and aimed at furthering national, rather than personal, aims.

Among the biggest losers of the recent political developments in Kuwait have been women. The clashes between political groups in Kuwait have dimmed the prospects of female candidates. Many have criticized the former female members of Parliament (MPs), fairly or unfairly, for being incompetent in Parliament, claiming that female MPs “achieved nothing,” believing they did not well utilize their position as elected MPs. These criticisms may also been amplified by some of the women MP’s affiliation with the previous government. As a consequence, there are no women in Kuwait’s new parliament.

Islamist parties did well in the recent elections, having won a majority of seats in the National Assembly. However, the rise of the Islamist parties is a regional trend that is not unique to Kuwait. Islamic parties have been faring well in post-revolution elections in other Arab states as well, and this might explain some of their success in Kuwait. The results of the Kuwaiti election, therefore, should not be seen in isolation. The discipline and efficient organization of Islamist groups has been apparent for many years, leading them to provide an attractive alternative to the chaotic aftermath of the Arab uprisings.

About the photo: A Kuwaiti minister casts his ballot in Kuwait City during the Feb. 2, 2012 parliamentary elections.