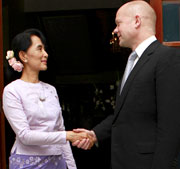 Major reform developments—and increased international engagement—continue in Myanmar. Since November, Myanmar has been awarded the chairmanship of the Association of Southeast Asian Nations (ASEAN) for 2014, and international dignitaries have visited the country, including the US Secretary of State Hillary Clinton and UK Foreign Secretary William Hague. The US has re-established diplomatic relations following another release of political prisoners. Domestic reforms have also continued, with the signing of a ceasefire agreement by the government of Myanmar with the Karen rebels and the participation of Aung San Suu Kyi’s National League for Democracy (NLD) among the key achievements. While sanctions have not been lifted, Western governments have begun to review their policies vis-à-vis Myanmar.

Progress in Myanmar has been far-reaching and deserves support, including that of Western governments. At the same time, legitimate doubts remain over the longevity of the détente in Myanmar. US engagement, as well as that of other Western governments, is necessary at this stage in order to try and maximize the success of current reform efforts.

It is important, however, to avoid narrowly focusing on short-term gains in order to gain quick access to Myanmar’s markets and score a success in pushing back China’s growing influence. Instead, international policies must pursue a long-term vision of progressive change in Myanmar.

Myanmar has begun to reap benefits of its domestic reforms in the international arena, including a significant warming of diplomatic relations both with ASEAN neighbors as well as external partners such as the US and some EU and OECD countries. On November 14th, ASEAN handed Myanmar the chairmanship for the year 2014. In November, in a dramatic about-turn of policy, Hillary Clinton became the first Secretary of State and the most senior US Government official to visit Myanmar in decades. William Hague, the British Foreign Secretary, followed with a visit in January of this year. While the lifting of sanctions is not on the table yet, these visits, along with other high-profile public statements by Catherine Ashton of the European Union and Australian Foreign Minister Kevin Rudd, have provided a significant boost to Myanmar’s international prestige.

This month, Myanmar has heeded another key demand that has been made over the years by Aung San Suu Kyi and her National League for Democracy, as well as Western governments; namely, to release more political prisoners. When 651 additional political prisoners were released a little over a week ago, the US quickly moved to announce  it would resume diplomatic relations with Myanmar and send a US ambassador.

The leadership of Myanmar under President Thein Sein has also undertaken steps to address another frequent criticism and make peace with the armed minority movements with which the majority ethnic Burmese government has been waging a decades-long war. In a major breakthrough, the government signed a first ceasefire agreement with the Karen minority in recent days. But the job is not done yet, as similar agreements with other major ethnic rebel groups—the Chin, the Mon, the Kachin and the Kayah—are still outstanding; Myanmar’s leadership announced that it might be another three to four years before permanent peace can be established with them.

Finally, in yet another sign of change, one that carries immeasurable symbolic weight, Myanmar’s democratic icon Aung San Suu Kyi and her party the National League for Democracy (NLD) registered for the upcoming parliamentary by-elections. This would be the first elections since the flawed exercise in Fall 2010, which was boycotted by the NLD and resulted in the formation of the current government.

Too Good to be True?

While it would certainly be unwise to discredit the hard-fought and, until recently, unthinkable progress, a good dose of skepticism is still in order. Progress has been uneven and, for the time being, Myanmar is still ruled by a lightly disguised authoritarian regime with a long history of human rights abuses.

A number of concerns are high on the agenda. The release of political prisoners deserves to be commended, but it is not complete. It has been reported that not all of the 651 prisoners released last week were indeed political prisoners, and that over 1,000 remain locked up. And though it is notable that the government of Myanmar finally achieved progress in ceasefire negotiations with the Karen rebels, the war is raging on in other parts of the country and is continuing to displace people.

There is also the issue of the leadership of Myanmar itself. It is still largely the old guard that rules the country, and it remains to be seen whether they are willing to cede or legitimately earn control of power following free and fair elections. Furthermore, even though the new democratic reforms and gradual opening of the country may have bought them a considerable amount of additional time, the people of Myanmar might ultimately want to hold their old leaders accountable for the injustices which they had to suffer in the past. As was described in a recent briefing in Foreign Policy, it remains unknown what the government’s true intentions are, and it seems likely that there are considerable tensions between those that favor reform and reactionary elements.

A lot is at stake in Myanmar, but short-term strategic considerations cannot supersede fundamental reform. It is tempting for Western governments to jump on the bandwagon and to try and reap the vast economic and geopolitical benefits of engaging in trade and investing in Myanmar, as well as countering the almost unchecked influence of China in Myanmar.

Indeed, the US, Europe, and Australia are all reviewing their sanctions on the regime in Myanmar, exploring how they might benefit from these new, nearly untapped markets (they have a lot of catching up to do: China, Hong Kong and Thailand account for more than 70 percent of total investment in the nation formerly called Burma, compared with less than 1 percent for the US). But the process of engaging with Myanmar shouldn’t be a superficial check-list exercise. There can be no shortcut to democracy, and the interests of the people of Myanmar, the economic and social development, along with genuine political freedoms, must not be ignored.

ASEAN should monitor progress in Myanmar and encourage further positive change. Western governments must also remain flexible in their approach towards the Myanmar government, making sure not to stifle progress, while, at the same time, not prematurely lifting sanctions. Human Rights Watch suggested that international monitors be sent to Myanmar to account for all political prisoners, and that could help calibrate the sanctions policies.

Finally, China should not unnecessarily be vilified or pushed to the sidelines. Instead, it will be important to engage in a wider strategic and productive dialogue with China to try and advance the reform agenda in Myanmar. China’s productive strengths need to be harnessed, rather than countered.

The New York Times reported that, at a recent news conference, Aung San Suu Kyi demanded sanctions not be lifted until Myanmar has seen free and fair elections, all political prisoners are released, and the conflicts with ethnic minorities come to an end. Because what matters most will be what happens inside Myanmar, and that should be the key factor determining international policies.

Till Papenfuss is a policy analyst at the International Peace Institute.