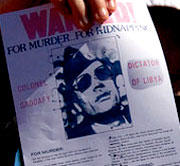 The execution of Muammar al-Qaddafi by rebel militants in Misurata on October 20th underscores again the new destiny of dictators. They often are unable to comprehend that the end of their rule is at hand, prolonging transitions and imposing great hardship on their populations. Uprisings against President Bashar el-Assad in Syria and President Ali Abdullah Saleh in Yemen point to the importance of finding ways to bring greater realism into the inner circles of the dictators with the aim of forestalling or reducing further bloodshed and suffering.

The rule of dictators and despots has often been protracted over many years, if not decades. The instruments of dictatorship are well known, including the use of brutal security services, torture chambers, and a culture of fear and repression. State-controlled media project an image of popular support and invulnerability. Dictators depend heavily on the support of their armed forces and police, as well as the backing of elites who are often from the same clan, tribe or political party. While dictators amass wealth, their populations usually are reduced to grinding poverty.

Yet the record is clear: few dictators die in bed or manage to go into exile anymore. Uganda’s Idi Amin, Haiti’s Baby Doc Duvalier and Ethiopia’s Haile Mariam Mengistu were the exceptions, escaping to Saudi Arabia, France and Zimbabwe. From Hitler and Mussolini, to the more recent Ceaucescu, Siad Barre and Mobutu, to Saddam Hussein and Qaddafi, the dictators finally lose control of the situation. They end up surrounded only by sycophants and close family members, and either commit suicide, are executed in prison or by an impromptu firing squad, or flee in ignominy to die in another country.

Uprisings in the Arab World

The Arab world is undergoing a period of convulsive change, sometimes peaceful, and at other times violent. Uprisings in Tunisia, Egypt, Libya and Yemen in 2011 have toppled or almost toppled their leaders. Tunisian President Zine El Abidine Ben Ali has fled to Saudi Arabia. Yemeni President Ali Abdullah Saleh was severely burned in an attack on his compound in August; after receiving treatment in Saudi Arabia, he has returned to Sana’a, but his fate remains unclear. Egyptian President Hosni Mubarak remains under arrest and hospitalized while facing a long prison sentence—or possibly execution—for his alleged role in the killing of protesters in Tahrir Square earlier this year.

Qaddafi’s fate has been widely publicized. After forty-two years of dictatorship, public hatred was further inflamed by the mass atrocities inflicted by his armed supporters in Misurata and other cities during the current uprising. In the October 22nd New York Times, a top aide reported that at the end, Qaddafi was completely isolated, in touch only through statements made via phone and broadcast by a Syrian television station. He had retreated into a fantasy world where he still believed that he enjoyed the support of his people. At the end, he pleaded for mercy, but the angry mob beat him up and finished him off with gunshots to the head and abdomen. He is buried in an unmarked grave. The international community has called for an investigation. But there is little interest in Libya in identifying, much less punishing, his executioners.

What can be done?

While in power, dictators generally thrive in the international arena. Their Heads of State often receive a welcome reception at the annual General Debate. In September 2009, Qaddafi spoke at inordinate length to the General Assembly; he was received at the Council on Foreign Relations as an important leader. In preceding years, he met a number of European leaders eager for oil contracts, convened a meeting of the African Union in Sirte on Darfur, and gave large sums of money to a number of African states for their support in the African Union. Saddam Hussein was similarly well regarded for many years by the international community—including the United States at the time of the Iran-Iraq war.

All this sends a misleading message that dictatorships are internationally legitimate and acceptable. In the context of the recent uprisings, it behooves the international community to send a different message and to do all it can to prevent similar convulsive outcomes in Syria and Yemen. There is an urgent need to speak truth to power, to convince Presidents Assad and Saleh to avoid further bloodshed and harm to their populations.

It is not enough for President Obama, Secretary Clinton, or the leaders of the European Union, to speak up. The broader international community, including the Arab League, has an opportunity and a responsibility to call on the leaders of Syria and Yemen to respect the voice of their people, to allow democratic elections and other reforms to take place, and, once they lose the support of their populations, to step down. Otherwise, they are likely not only to face the same fate as these other North African leaders, but to inflict further harm on their already suffering populations.