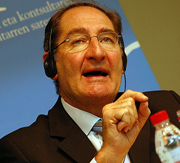 South African human rights lawyer Brian Currin is a leading figure in international efforts to find a negotiated solution to the Basque conflict. After initiating the 2010 Brussels Declaration that called on ETA, the armed Basque nationalist and separatist organization, to declare a ceasefire, which the group said was “permanent” last January, Currin established the International Contact Group for the Basque Country.

On October 17, 2011, an international conference in San Sebastian, attended by figures such as former Secretary-General Kofi Annan and co-organized by the International Contact Group, attempted to move the peace process forward. A declaration from ETA followed shortly thereafter.

Mr. Currin was interviewed by Marie O’Reilly, Publications Officer for the International Peace Institute, on October 28, 2011.

Marie O’Reilly (MOR): Brian Currin, thank you very much for talking to the Global Observatory today. On Thursday, October 20th, the Basque separatist group ETA announced a “definitive” end to its armed activity. ETA has broken “permanent” ceasefires before. Do you believe that this end will be definitive? And why has this declaration come about now?

Brian Currin (BC): Well, I do believe it will be definitive. And I think we must remember that this is not a ceasefire, it’s a declaration of the end of the armed struggle for ETA. It has taken some time to get to this point, but a very carefully designed process has been followed over the last few years to get here. The process was developed systematically, step by step, over a period of time. And so, I believe that at this moment, we have seen the end of ETA violence.

Previously, the ceasefire declarations were essentially the result of some engagement between Madrid and ETA. It was clearly easier for ETA to breach commitments to Spain because they could justify it on the basis that Spain breached commitments to them. But it is a different matter breaching a commitment to the international community. I say this in the context of ETA’s January 2011 ceasefire declaration being a response to the Brussels Declaration.

I am absolutely convinced that ETA will not go back to violence. The next thing that needs to happen is the government should meet with ETA and talk about the consequences of the violence, some of which would be the issue of prisoners, the whole question of decommissioning, as well as talking about victims—all of those are confidence-building measures.

MOR: The current Spanish government appears unlikely to enter talks with ETA. The leader of the center-right Popular Party—the favorite in Spain’s upcoming general elections—has also said that he will not negotiate with the group. Do you think this might change after the election?

BC: If I read everything that the Popular Party has said, their position, as I have understood it, has always been that they won’t negotiate a ceasefire with ETA. Their position is that ETA would have to be defeated, that ETA would have to be literally demolished and disappear completely. Interestingly enough, that has also been the position of the government—the Socialist Party—ever since the last ceasefire collapsed.

And now that ETA has declared an end to its armed struggle and wants to talk about the consequences of the violence: it is not there to negotiate the terms and conditions of a ceasefire, it is not there to negotiate the end of violence—violence has ended. We’re now at a point of normalizing politics in the Basque Country and in Spain. There are huge consequences of the violence that need to be dealt with. Some of them obviously have an interest for Abertzale Left [the Basque nationalist Left] and for ETA—for example, the issue of prisoners and the issue of the extreme security measures that are in place. But there are other issues, particularly decommissioning of arms, that surely must be of interest to the Spanish government and to France. So I would be very surprised if they are not willing to sit and talk about how those consequences are addressed. They won’t just go away on their own.

MOR: As you have said, ETA has agreed to a permanent end to armed violence, but it has not yet said it will disband or disarm. What will it take for ETA to disband?

BC: If you think about it, here we have an organization that has been involved in armed struggle for decades. But, as a paramilitary organization, wearing that particular label, it no longer exists. It’s not going to shoot another bullet. So the next step, which would be decommissioning, is purely a logical step, and there needs to be a process agreed as to how that happens. Who is going to identify the arms, how are they going to be identified? For me that is a logical consequence of what has happened but it needs to be discussed and it needs to be agreed to, and that’s why the governments and ETA leadership need to get together.

So for me, what it will take is a process. In that process there are prisoner issues—some of them clearly of a humanitarian nature—that should be addressed. Now, if ETA is not waging a war anymore and the prisoners are serving their sentences, surely there is absolutely no reason at all why Madrid and France should not agree to prisoners returning to the Basque Country. That is, in my view, a no-brainer. There are some prisoners who are over the age of seventy, and there are some that are terminally ill. Very often non political common law criminals are released on that basis, so that could happen in this instance once the political environment has normalized.

These are issues that are not all that complicated that could be dealt with, which would assist to both sides. And it seems to make common sense to do that sooner rather than later. What is interesting is that, in this instance, there was not a single substantive demand on the table from ETA before agreeing to end the armed struggle. And that’s what is very positive. That is what should make it easier for the governments to respond positively.

MOR: What role do you see for third-party observers and facilitators going forward in this process? Do you see yourself playing a role as a mediator, perhaps, between the government and ETA?

BC: There are two tracks really. One of them is the “paragraph two” track—I’m referring to the October 17 Declaration from the world leaders, where they called upon the governments to engage with ETA on the consequences of the violence. That is something that will be dealt with by others who have previously facilitated engagement between Madrid and ETA. I doubt very much that ETA and the government will meet on their own.

But once that has been dealt with, and when, ETA no longer exists as a paramilitary organization, then all-party political negotiations should commence, in the Basque Country. Because it is critical that the Basque political parties negotiate and come to agreements about their own future—whether it is the present form of autonomy, increased autonomy, [or] independence. These are the issues that all the parties in the Basque Country need to sit down and negotiate about.

Such negotiations should happen in the Basque Country. This is referred to in paragraph four of the October 17 Declaration from the international leaders, in which they say: to the extent that the parties may need international assistance to facilitate those negotiations, then the international community will be willing and able to assist. The International Contact Group has been doing that sort of work for most of this year. We have met with all the parties except the Popular Party, because they have not wanted to meet with us. Part of [our] mandate is to help to facilitate, to the extent that it might be required, future negotiations. So I would say that there’s a good chance that the International Contact Group would be required to assist in those negotiations during the course of the next number of years, because I don’t see that happening over night.

BC: Thank you very much for the opportunity to speak to you.