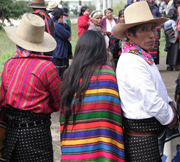 Amid an alarming rate of criminal violence, Guatemalans head to the polls on November 6th to elect a new president in a contest that bucks the leftward trend of Latin American politics. Sunday’s run-off election pits ex-General Otto Perez Molina against populist businessman Manuel Baldizón. Neither candidate represents the Unidad Nacional de la Esperanza (UNE), the center-left ruling party of President Álvaro Colom, who is limited to a single term under the constitution. It’s the Right vs. the Right in Guatemala.

The UNE’s chosen candidate was the first lady, Sandra Torres. But the constitution also forbids close relatives of sitting presidents from running for the executive office. In a bid to circumvent this restriction, Torres divorced President Colom in the spring just as her presidential campaign was getting underway. However, the Constitutional Court ruled in August that she was nevertheless ineligible due to her past relationship with the president. As a result, for the first time since the end of the military dictatorship in 1985, the ruling party will not have a candidate on the final ballot.

Yet, it is not the old ideological divide that provides the most important backdrop to this election. Rather, it is the level of criminal violence that has overtaken the country. The World Bank’s 2011 World Development Report shows that the rate of violent death in Guatemala is higher now than it was during the country’s long and bloody civil war, which ended in 1996. This violence is largely the result of increased drug trafficking in the region, as Guatemala lies on the principle route between South American supply and North American demand. Most recently, the violence has been spurred on by the presence of the notoriously murderous Zetas, a criminal gang from Mexico. However, the drug violence is by no means exclusively an externally driven affair; according to InsightCrime, local, long-established criminal families are major players in their own right.

The Guatemalan government has begun to make a concerted effort to stem the tide of violence. Reform-minded Attorney General Claudia Paz y Paz has stepped up prosecutions, making several high-profile arrests over the summer. Noted human rights activist, Helen Mack, was appointed to direct a comprehensive police reform commission. And the mandate of the United Nations-authorized International Commission Against Impunity in Guatemala (CICIG) has been extended through 2013, allowing it to continue to assist domestic institutions in the investigation and prosecution of illegal armed groups. A recent Crisis Group report found that while CICIG had indeed achieved a number of notable short-term successes, including the appointment of Paz y Paz, there remained a considerable amount of resistance to its work among some entrenched interests in Guatemala, and much work remains to be done.

Both candidates have promised a vigorous response to the violence.  General Perez campaigns under his Partido Patriota party’s iconic logo of a clenched fist and a call for a hard-hand approach, or mano dura. For his part, Mr. Baldizón, founder of the LIDER party,  has called for a reinstitution of the death penalty and pledged to begin applying it immediately upon taking office.  But it is not clear that either candidate would be the ideal person to institute the kind of comprehensive rule-of-law reform that would be necessary to confront the levels of criminality and corruption currently penetrating Guatemalan society. General Perez has been accused of human rights abuses, dating from his time as head of military intelligence during the civil war. Meanwhile, Mr. Baldizón was accused of financial irregularities while he was a congressman and is suspected by some of having potential ties to narcotraffickers in his native El Petén, a particularly underdeveloped region overrun by organized crime.

In the final week of campaigning, local polls have General Perez well ahead, with an eight to ten point lead. He almost defeated Álvaro Colom in the 2007 presidential election and handily won the most votes in the first round in September. So there is a sense that Otto Perez’s time has come.

However, a Baldizón victory should not be ruled out. The polls did not prove entirely accurate during the first round of voting. And he has since gained the support of a key national association of indigenous groups (CONIC), which is no small detail in a country whose population is over 50 percent indigenous. On the other hand, the Supreme Electoral Tribunal (TSE) has removed a number of rural voting sites, a move it deemed necessary because of possible electoral violence, but one which could restrict voting access for many indigenous communities.

Thus, General Perez remains the front runner and is likely to win. What would an Otto Perez presidency look like? He publicly supports CICIG and has promised greater transparency, police reform, and the prosecution of members of the current government for corruption. But his clear emphasis is on a hard military and police response to rising criminal violence. If the clenched fist of the ex-General is not tempered by the open hand of justice and the rule of law, the prospects for long-term peace and security are slim.