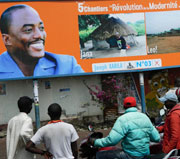 The Congolese people began voting today for the second presidential and legislative elections since the post-civil war elections held in 2006. This time around, the Congolese government is contributing 60 percent of the overall $700 million budget for the elections–compared to 10 percent in 2006–and the Independent National Electoral Commission (CENI) is in charge of organizing the elections. The UN Security Council resolution 1925 of May 28, 2010 limited the role of the UN mission to providing “technical and logistical support for the organization of…elections, upon explicit request from the Congolese authorities and within the limits of its capacities and resources.”

In contrast to Côte d’Ivoire, the UN Stabilization Mission in the DRC (MONUSCO) has no election verification mandate. Election monitoring and observation is not part of the UN mandate in the DRC either; that is being led by the European Union (EU), the Carter Center, and other international and local organizations. With most of its peacekeepers deployed in the eastern part of the country, the main priority for the UN Mission remains to “ensure the effective protection of civilians …under imminent threat of physical violence.” The UN has said that it does not intend to play a police role in case of election-related violence.

The CENI chair is saying the country is 99 percent ready for the vote despite enormous logistical challenges. President Joseph Kabila is likely to win the election due to his strategic decisions made in January, including consolidating his power and reforming the electoral system, and the opposition’s inability to agree on a candidate. The main opposition candidate, Etienne Tshisekedi, has been unable to secure political and financial support for his campaign and has made some radical statements.

Although voting began peacefully in much of the country, many irregularities (such as late election materials arrival and ballot papers found already filled before elections began) and violent incidents are already being reported.  One of the key questions seems to be whether main opposition leader Tshisekedi will attempt to mobilize its supporters to take the streets.

The CENI chair Bishop Ngoy Mulunda has said repeatedly that the country is 99 percent ready for today’s vote, despite that fact that these elections are an enormous logistical challenge. There are 32 million electors (6 million more than in 2006) and 64,000 polling centers. The ballots can be over 50-pages long, due to the 19,000 or so candidates to the legislative elections (twice as many as in 2006) competing for only 500 seats, and are dispatched with the help of UN aircrafts and additional air support provided by the Angolan and South African governments. A committee for the mediation of the electoral process composed of seven Congolese civil society and religious leaders was just set up in Kinshasa that could mediate in case of unrest, and the international community (including the African Union and the United Nations) has made repeated appeals for calm on the eve of the elections.

But the defeat of the DRC’s current president, Joseph Kabila, seems unlikely. In January, the 40-year-old president made strategic decisions without crossing lines that would have triggered strong condemnations from the international community. He has consolidated his power and successfully transformed the electoral system in his favor to a first-past-the-post system—a constitutional change approved by Parliament.  This change almost guarantees Kabila and his PPRD party’s victory, as the political opposition has not been able to agree on one candidate.

The main opposition leader is 79-year-old Etienne Tshisekedi (UDPS party), who boycotted the 2006 election and appears to have been unable to secure political and financial support for his campaign during a recent tour in Europe and South Africa. Tshisekedi has already made some radical statements, such as declaring himself president before the vote, which does not bode well for weeks to come.  On Sunday, Tshisekedi called for the removal of the head of MONUSCO (and former US ambassador to the DRC) Roger Meese, and to replace him with someone “more impartial and competent,” raising fears that opposition supporters may also eventually turn against the UN mission. On Saturday, police clashed with UDPS supporters while enforcing a ban on opposition rallies near the Kinshasa airport, killing three people.

Elections results should be announced by December 6th—the same day that President Kabila’s constitutional mandate expires—but accusations of election fraud had already surfaced days before the vote. Although voting began peacefully in much of the country, many irregularities (such as late election materials arrival and ballot papers found already filled before elections began) and violent incidents are already being reported in the center and south of the country.  One of the key questions seems to be whether main opposition leader Tshisekedi will attempt to mobilize its supporters to take the streets, something that MLC party leader Jean-Pierre Bemba was not able to do in the 2006 elections after claiming that the run-off was rigged. Accused of treason after his bodyguards and Kabila’s presidential guards clashed in Kinshasa in March 2007, he fled to Belgium where he was arrested in May 2008 and transferred to the International Criminal Court in the Hague, where he currently stands trial for war crimes committed in the Central African Republic.

In April of this year, the International Peace Institute published an issue brief on the renewal of the MONUSCO’s mandate, which argued that it should be limited to a technical role in the election, as requested by the Congolese authorities, but only on the condition that the international community re-engages President Kabila in a frank, political dialogue on long-term democratic governance reforms. The report also highlighted some challenges associated with holding a second post-transition election that would see much less international engagement than in 2006, when the previous UN mission MONUC was mandated to support the Government of National Unity & Transition in organizing and securing the electoral process, and European EUFOR troops were temporarily deployed in Kinshasa to help secure the elections.

About the photo: Kabila campaign poster in the DRC, November, 2011. Photo by Enough Project/Fidel Bafilemba